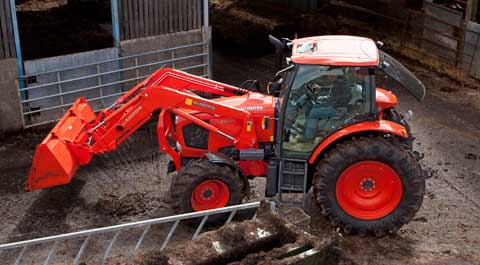 From a driver’s perspective, the M135-GX has loads going for it:A roomy four-post cab with the best views around, loads of clever gadgets and an incredibly smooth ride, combined with the nimbleness of a tango dancer.

In short, it has big tractor sophistication with a small tractor feel.On the downside, the powershift box needs a bit of polishing and the cab trim and switchgear feel a little dated.

If you can put up with that then it should certainly be on your shortlist when the time comes to change your existing tractor.

While many of the basics are the same as on the company’s previous range-toppers, the GX’s motor is now kitted out with a catalyst and particulate filter to keep things clean and flower-friendly.

Although a six-star tedder and a loader on mucking out duties did little to test the engine’s performance, it did highlight the effectiveness of one particular feature.

Dubbed “Work Cruise”, it ramps up fuelling as the engine comes under load. Unlike the powerboost approach other makers employ, it never pushes horsepower above the rated 135hp, working simply to maintain revs at a set level.

Tootling about with the tedder at a steady 1,100rpm, its effect is very noticeable. Start climbing a slope without the relevant rocker-switch flicked and revs drop off at a rapid rate. Knock it on and the needle swings right back to where it should be.

Love it or hate it, a four-post cab has found its way on to Kubota’s flagship model. Given that the majority of the company’s tractors sold are too small to warrant any sort of proper cabin, you could be excused for not expecting too much.

But fear not. Unlike most on the market, the big doors are easy-closing and the three steps lead up to a cab that offers the best visibility on the market.

The four posts are wafer thin and the new performance monitor is tucked away out of sight. A super-skinny exhaust goes unnoticed, too, and you get a good look at the hitch.

The rest of the cockpit is generally spacious, if a little short on places to put your lunchtime pasty. 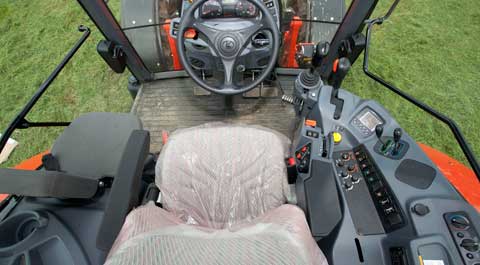 This is the first Kubota machine to get a separate performance monitor. The smartphone-sized display nestles neatly between the gearstick and spool levers.

It shows 30-odd pieces of information, including fuel use and area worked, and the operator can choose which four are displayed on the home screen, with the four blister buttons alongside.

It is not the most intuitive setup, but works fine once you get the hang of it.

The gearstick is positioned forward of the screen. Reaching for it is a bit of a stretch, so you’re better off controlling the eight-speed powershift on the armrest-mounted controls.

This is something of a novelty for a tractor this size. Linkage slider, lift and lower rocker switch, hand-throttle, powershift and engine speed presets are all grouped on the armrest, but it’s clearly been designed for people with shorter arms than us.

The loader is controlled with a mechanical joystick. It is sensitive enough, but lacks a declutch button which would be handy for loader work. We’d also like to see a forward/reverse shuttle button on the joystick.

The cabin is let down by the general feel of the trim and switchgear. The controls lack illumination and it’s a bit short on storage. 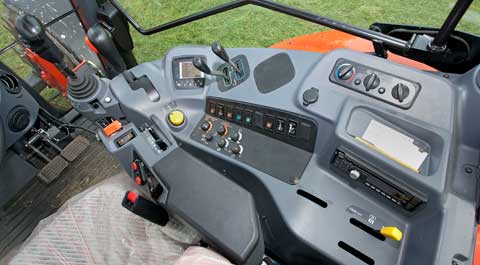 At 135hp, this Kubota is likely to do its fair share of haulage work. For that it gets three-stage front-axle suspension. On the softest of the three settings it soaks up potholes like a space hopper and makes 40kph road travel pretty pleasant.

However, powershift changes spoil the smooth ride. In auto it shifts unpredictably and never seems to get the timing quite right, so you’re better off working in manual.

In road mode, the auto function scrambles up and down through the top four powershift steps, while the field setting does the same with the bottom four.

You can adjust the sensitivity of the auto shifts, but we found it didn’t make too much difference. Fortunately things are smoother under load.

While clunky gearshifts are bearable, the squawking parakeet that signals each cog swap is less agreeable.

For heavy haulage work there’s a downhill control switch which speeds up gear changes, avoiding over-runs and making sure the trailer knows who’s in charge.

We found the bi-speed turn feature handy in the field and around the yard. It’s effectively an overdrive gear for the front axle – when the wheels are turned more than 35deg, it moves up a notch and spins them 60% faster than the rears, pulling the nose of the tractor around.

Bevel gearing rather than UJs allows the front wheels to turn up to 50deg for ultra-tight cornering – the turning circle is just 8.2m. 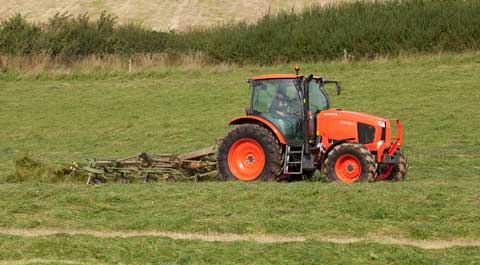