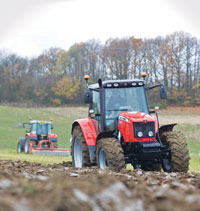 Four or six cylinders? It’s a debate that has raged for decades and is not one that will be settled easily. To make some sense of it, Nick Fone got hold of two seemingly similar 135hp Masseys to try to fathom out which is best

We may all have our gripes about various makes and models, but one thing we can’t complain about in the modern era of tractors is lack of choice.

Take MF. It offers 26 different models, all with a choice of transmissions, engines and spec levels. Narrow your search to the firm’s mainstream ag tractors and you’ll still find a total of 35 tractor models between 74hp and 370hp.

Or you can opt for the more sophisticated 6475. Or, if you want the full bells-and-whistles treatment, there’s the 7475 with its stepless DynaVT gearbox. 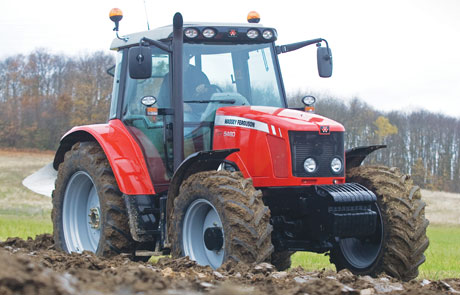 MF’s four-cylinder 5480 is a punchy performer

For this article we thought it would be interesting to compare the two tractors at the bottom end of this line-up – the six-cylinder 5475 and the four-cylinder 5480, both putting out a bang-in-the-middle-of-the-market 135hp.

Stand them side by side and the first thing you spot is the difference in their lengths. The 5475 runs to 4.8m, 45cm (18in) more than its four-pot counterpart.

Confusingly, the bigger six-cylinder tractor has the smaller number designation, 5475, while the beefier-sounding 5480 hides a four-cylinder power-plant under its more slender nose.

But there is method in Massey’s madness the smaller tractor is actually the more punchy performer. Its Sisu engine may pump out the same hp, but when it comes to raw muscle it’s torque that counts, and the 5480 has 18Nm more than its more sizeable sibling. In reality this means it is 3% better able to maintain a set speed when it comes under load.

Perhaps more importantly, the smaller tractor is marginally more fuel efficient. MF’s figures show that for every kW produced in an hour, the larger Perkins-powered tractor consumes 208g of diesel while the more petite 5480 burns 3g less, which equates to a saving of about 1%.

To test this out (in a very unscientific way) we put the two machines head to head for two very different tasks. First up, both tractors’ tanks were filled to the brim.

After a 10-minute trip up the road they were then required to mow and mulch barley stubble with a 3m flail-topper. Then, after an hour of that they moved on to ploughing.

Back at the yard, we measured the amount of fuel it took to re-brim the tanks. We had hoped to see some difference between the two, but in the spirit of all great unscientific endeavours there wasn’t a gnat’s whisker in it. So we’ll have to take Massey’s word for it.

But the head-to-head did highlight some other key differences. For one, the longer wheelbase of the 5475 meant it needed a noticeably bigger headland to accommodate its 9.6m turning circle.

But that extra length also meant that turnarounds were a marginally more comfortable experience the 5475 lifts the plough with less of a jolt at the end of a run. Neither rears like a testosterone-charged stallion, but what the chunkier tractor lacks in nimbleness it makes up for in balance.

That difference becomes much more blurred when it comes to road travel. Front-axle suspension and electronic linkage damping make for ultra-smooth manoeuvres even with mounted kit on the tail. In fact you can barely tell which tractor you’re driving until you look down over the bonnet.

The 5475 definitely has a touch of the Gerard Depardieus about it – its nose will not go unnoticed. But that shouldn’t be surprising given that the tractor shares the same dimensions as Massey’s more powerful and more sophisticated 6400-series machines. 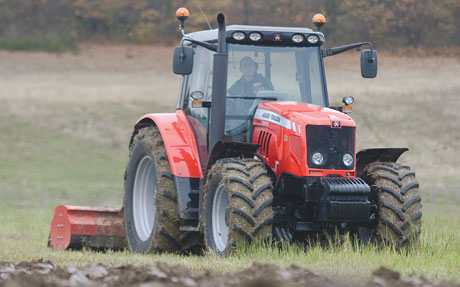 Well, aside from price – the equivalent 135hp 6475 costs over £5000 more than the 5475 – you get a whole lot more gadgetry with the pricier machine. Most noticeably it has a six-speed fully-automated powershift gearbox plus snazzy computer controls and electronic spools.

But that isn’t necessarily going to always count in its favour. While much of it might help to ease the operator’s workload, some of those fancy toys will inevitably remain unused on a day-to-day basis.

That’s a quick whiz through the differences between the two tractors, what about the features that they have in common.

• Hydraulics – three proper arm-draulic spool-valve levers that flick out of their detents when the circuit pressurises, one of which will run in float.

• Linkage – electronic controls that work at the flick of a switch. A simple, but clever feature (that appears on other MFs) is a pair of LEDs that indicate whether the arms are rising or falling. Get them flashing alternately with the plough in the ground and you know you’ve got the draft control set perfectly.

The only downside here comes when adjusting maximum lift height. You twiddle the dial to increase it, but when you want it lower you have to drop the arms right down, wind the dial right round to minimum, set it to lift again and carefully adjust it once more.

• Diff-lock and 4wd – when selected, diff-lock automatically kicks in and out when the linkage is lowered and raised. Four-wheel drive is either on or off and also activates when braking.

Gearbox – the Dyna4 transmission is the whizziest bit of kit on the 5400s. It has four powershift steps within four ranges that are changed using electro-hydraulics. A single silver-topped T-bar handles everything – knock it forward to change up, backwards to shift down. When you reach the top or bottom of a range squeeze the orange thumb button at the same time as nudging the lever and the range change happens almost instantaneously. Dyna4 range changes don’t seem to have the agonising delay that other similar gearboxes suffer.

If you’ve got better things to be doing with your right hand than changing gear you can always use the shuttle-lever to shift up and down. Again, nudging it forwards prompts an upshift and, you’ve guessed it, backwards a down-change. De-clutching allows operator-initiated range changes.

A simple dial controls the aggressiveness of direction changes and gives smooth, seamless shuttling for headland turns and sharper shifts for loader-work.

If it sounds complex, it isn’t. This has to be one of the simplest and most versatile semi-powershift gearbox on the market.

• Maintenance – The two tractors differ when it comes to engine bay access. There probably aren’t gas-struts built that are man enough to lift the six-cylinder 5475’s huge hood in one, so it leaves two side panels in place – shame, but they’re easily whipped off.

In contrast the slender nose of the four-pot 5480 lifts as one to reveal all. It has simple slide-out rads while the bigger tractor’s more complex cooling package swings up and out, making for really easy blow-outs.

When it comes down to simplicity, the 5480 holds the trump card again. Its four-cylinder Sisu motor has the advantage of only having 16 valves and four injectors compared with the Perkins’s 24 valves and six injectors. That means there are a third fewer moving parts, which presumably means it’s less likely to go wrong.

To counter that, Perkins’s men would say each of the four-cylinder’s pistons, rings, bearings, etc, come under more strain than the six-pot’s if they are producing the same power at even greater torque levels.

So four or six cylinders? On paper it’s pretty clear cut – the four-pot 5480 pumps out more torque, uses less fuel, is more manoeuvrable and costs almost a grand less than its six-cylinder sibling.

But the 5475 is marginally better balanced and sounds just fantastic. The Perkins power-plant burbles away smoothly at idle and has that wonderful six-cylinder boom-boom in work.

That said, the Sisu sound-track isn’t too bad either. A mild clatter at idle, but a lovely gravelly grumble and whistle under load.

Having always held the view that six is better than four, these two Masseys have made me change my way of thinking – the four-pot wins it for me.