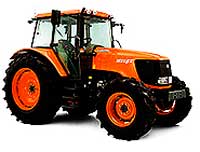 Kubota has a new 132hp flagship to replace its previous range-topper – the M128X.

Aside from an extra 4hp, the M130X offers greater levels of torque back-up. Engine characteristics have been tweaked to boost reserves to 540Nm at 1100rpm.

Where things have changed is with the engine/transmission management system. The set-up now provides the facility for preset engine speeds, a variable rev-limiter and a function to maintain a set working rpm with the transmission shifting automatically according to load.

With analogue dials and digital displays, a revamped dash is claimed to be more clear and easily readable.

The 16F x 16R gearbox itself is pretty much unchanged – a two range, eight-step powershift with clutchless shuttle. “Field” and “Transport” modes provide automatic up- and down-shifts.

It is hoped that the first M130X will land on UK shores in time for the ScotGrass event to be held at Dumfries on Tuesday 11th May.