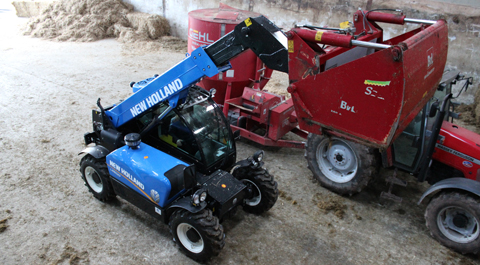 The LM5020 is a neat machine with impressive lift and reach, but low transport speeds mean it’s best suited to yard-based duties. For those wanting to travel further or tow, the slightly-larger LM5030 offers greater lift capacity, longer reach and a faster top speed.

Compact telehandlers are going through a bit of a purple patch at the moment and New Holland has just joined the party by introducing two pint-sized models.

Previously, the smallest machine in the New Holland stable was the 3.5t lift LM5040, but at just over 6m long and roughly 2.5m tall it wasn’t really a compact machine.

The LM5020 and LM5030, however, are significantly smaller and are likely to appeal to livestock or mixed farms that want to upgrade from a loader tractor. Both machines are built by Italian maker Dieci and include decent equipment levels, even in the basic Delta spec.

The LM5020 is the smaller of the two and at a shade under 2m tall and at just 1.8m wide, it is ideal for ducking in and out of pokey buildings or spinning around in a tight yard.

Boasting a 2.5t lift capacity with an impressive 5.78m reach, it promises to pack a pretty mean punch for its dainty proportions.

Powered by a side-mounted, four-cylinder Yanmar diesel, the LM5020 has ample power for most yard duties. The 85hp block sounds sweet and servicing should be pretty straightforward thanks to a large one-piece engine cover that gives generous spannering access.

For those operating in dusty environments, the top-spec Plus model comes with a reversible fan as standard. But those opting for the more basic Delta model we tested will have to pay extra for this.

Drive is delivered via a single speed hydrostatic unit, which propels it to a top speed of just 27kph. This is fine for nipping around the yard, but it’s a bit too pedestrian for long road hauls and not really suitable for towing.

If you need a bit more poke, its bigger sibling, the LM5030, has a more impressive top speed and boosts lift capacity and reach to 2.8t and 6.35m respectively. It also has a larger 4.4 litre, 101hp Stage 3a Perkins powerplant and two-stage hydro unit.

A large door gives easy access to the cabin, which has such a low floor you hardly need to step up into it. This does limit ground clearance a tad, but this machine isn’t designed for serious off-roading anyway. The door has a fold-back glass panel that’s big enough to let the fresh air in and small enough to stop you leaning out too far.

Controls are straightforward and it’s easy to hop on and drive. The forward-reverse shuttle is mounted on the left of the steering column and all boom functions are operated via the console-mounted joystick.

Recent legislation changes have forced New Holland to fit a kill switch, which means you have to wrap your hand around the grip before it will work. This takes a bit of getting used to, particularly if you’re hopping on and off the seat a lot. Operators could well be hunting for a pack of cable ties after a few hours in the seat.

Another safety measure means you can no longer ignore the flashing light and beeping coming from the load sensor. If the operator attempts to push a heavy load out too far it will lock the hydraulics solid and they can only be released by turning a key on the control panel.

The basic Delta spec machine has mechanical seat and no air conditioning, but these are both standard on the Plus model.