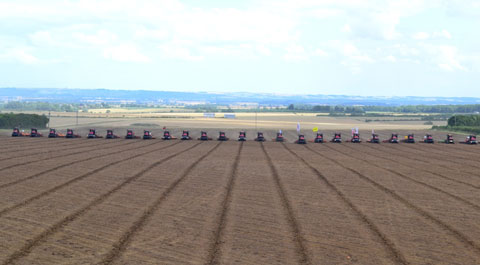 A Lincolnshire farm was the venue for a new world record last weekend, as 50 Case IH Quadtracs went to work in the same place at the same time.

The event at Hemswell Cliff, involving more than a third of all the UK’s working Quadtracs, saw the giant machines work continuously for seven minutes and 47 seconds, securing a place in the history books.

This successfully surpassed the ’30 machines cultivating in one field for five minutes’ which was the minimum needed to get them recognised by Guinness World Records.

It was organised by Helen Rainthorpe to raise money for Cancer Research and in memory of her father, John Rainthorpe, who died of bile duct cancer in 2010.

The event has already raised more than £20,000 for Cancer Research UK’s Relay For Life – a figure that’s still rising. Donate

Specs and prices for the latest Case IH Quadtrac models.