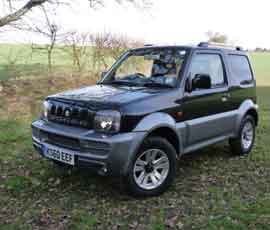 A banging headache, sore back, achy legs, ringing ears. No, it wasn’t the by-product of my annual stint cleaning the farm grainstore – it was the result of a nine-hour return trip to Devon in a Suzuki Jimny.

Now, of course, that’s a long time to spend in any car, let alone something as titchy as a Jimny. But that was the car that was available so, very much in the manner of Captain Scott, I had to do my best for queen and country. We’ll return to the cause of my symptoms in a minute.

The market for small-but-tough 4x4s is surprisingly small. The Daihatsu Terious has gone, leaving just the Jimny and Fiat Panda 4×4 to fight their own corner against the big beasts.

And bigger beasts they certainly are. Swing in to an Marks & Spencer car park – the habitual stomping ground for Discoverys and Range Rovers – and you’ll realise that this rough’n’tough 4×4 looks more like a 2:1 scale model in comparison.

Looks-wise the Jimny hasn’t changed much over the years. It’s boxy and inoffensive, but by no means groundbreaking; even the flagship SZ4 model is on the basic side.

See the Suzuki Jimny in action and read the full report below.

However, those miniature proportions make parking a doddle and the driver gets a great view of the road from his perch up high. But space in the back is at a premium and the boot is almost non-existent.

So what’s the problem? Well, jump in and head for the open road and the 1.3-litre petrol is crucially lacking in poke. The engine needs a thrashing every time you want to get to a reasonably decent cruising speed and hills have you willing the poor thing on like the chubby kid in the school running race.

Because of that it’s loud, too. Your ears are bombarded as if by an increasingly irate hive of bees under the bonnet as you accelerate. The tyres drone and the wind crashes against the uncompromisingly square body. You can cruise at 75mph, but that’s only just short of the 87mph top speed, so the car is working very hard.

As with many small vehicles on fast roads, the ride is no great shakes either and the suspension is pretty hard for an off-roader. You need to keep a fairly tight grip on the wheel on a motorway and it tends to get bullied by overtaking lorries, buses and other bigger vehicles.

Back on smaller roads, things are altogether calmer. The Jimny is perfectly happy tootling about on B-roads and is decidedly capable off-road. Despite being kitted out with some pretty narrow road-spec tyres, it was actually quite accomplished here, even on greasy surfaces.

Weighing about 1,400kg, there’s little chance it’ll get bogged down in the mud, either. If you do, there’s a low-range 4wd box to assist.

If you need a vehicle for relatively short trips, like fetching and carrying spares from the local dealer, the Jimny is absolutely fine. Likewise, if you need to take to the farm tracks to hand over an emergency Thermos of tea to the tractor driver (and don’t want to get the Discovery dirty) then this simple, basic car could well fit the bill.

However if you’re heading further afield and want to roar up and down wet, windy, unpleasant motorways, then leave the little Jimny at home and choose something bigger. Simples, as that darned meerkat would say.