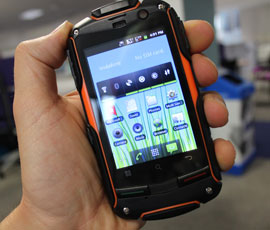 About to make the jump from standard mobile phone to smartphone? Worried about how this expensive, technology-packed wonder will cope with farming conditions?

You have good reason to be anxious. While ordinary mobile phones are surprisingly durable, their sophisticated smartphone cousins are pretty fussy about the way they are used.

Let one drop off the workshop bench on to the concrete floor and there’s a high chance the screen will smash. Get it even slightly damp and it will reward you by going haywire and demanding to be put in a warm, dry room for several hours.

But now a German company called Utano has produced what is reckoned to be the first proper consumer-oriented rugged phone on the market. It’s called the Utano Barrier T180 and is aimed at farmers and builders as well as the extreme sports brigade.

Farmers Weekly’s David Cousins demonstrates the key aspects of the phone and tests out how tough it really is.

Farming in the age of the smartphone

There’s no danger of confusing the Utano T180 with any other smartphone on the market (apart from the JCB Pro-Smart, which has many of the same innards). It’s slightly wider and taller than a standard iPhone or Samsung/LG/HTC/Nokia equivalent, but about twice as thick.

The orange-and-black colour scheme, grippy sides and big screw heads mean you won’t confuse it with anything else. It all looks well screwed together, with rubber bungs to keep water and duct out.

How tough is it?

The phone is rated to be dropped 1m on to concrete, which may sound a little underwhelming. The likelihood is that it would probably stand up to more extreme drops, but no maker is going to give an open-ended guarantee on this sort of kit.

The screen is said to be thicker than those used on regular smartphones and there’s also a film over the screen to give extra protection. This didn’t seem to reduce the sensitivity of the touchscreen.

The Utano is also dustproof and waterproof to the industry-standard IP67, which means it’s happy to sit in 1m of water for 30 minutes.

Unusually, this is a dual-SIM phone. So instead of having one SIM card giving you access to one phone provider’s network, you can have a SIM card from, say, Vodafone and one from O2.

There is a downside to dual SIM, however, which is that standby time drops from 420 hours to 160 hours. However the battery is rated at 2,000mAh, somewhat pokier than the 1,450mAh batteries fitted to many smartphones. The ringer is loud, though not deafening.

What can it do?

The Utano has a standard Android operating system that will be instantly recognisable to anyone who has had that in any other smartphone. It’s not absolutely the latest software, but only geeks will notice the difference.

Screen size is the same width as an iPhone or HTC but about 10mm shorter. Screen sharpness and brightness aren’t quite as good as on either of the phones mentioned, but they’re not far off.

The touchscreen keys are pretty small but are very reactive, so you shouldn’t have too many texting problems. The 5MP camera and video recorder are both good quality and browsing the internet/listening to music/using Google maps etc all works fine.