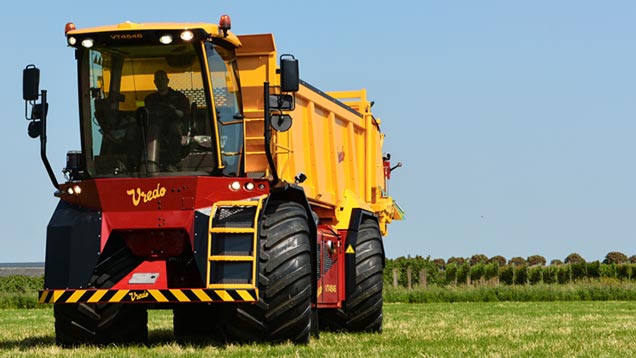 If you have a lot of muck to get rid of, this new self-propelled Vredo VT4546 and Tebbe muckspreader combo could be just the ticket.

Developed as a successor to the Vredo VT3936, it will also no doubt benefit from Agco’s decision last year to stop making its balloon-tyred TerraGator.

Despite its size and weight, the machine can apparently travel at 30-35kph and with crab-steer engaged ground compaction is minimised.

The maker says it can apply materials at low rates of 1-5t/ha with a very even spread pattern.

The VT4546/Tebbe has the same basic specification as the slurry machines already made by Dutch firm Vredo.

An RDS weight and control system is fitted and application is independent of forward speed.

The company says it is also working on adapting other machines to go on its chassis, including fertiliser spreaders, lime spreaders and sugar beet chaser bins in wet conditions.

The standard machine has an auto-greasing system, engine brakes to control the machine when going downhill, work lights and front axle suspension.

The engine is centrally positioned in the machine to give an ideal weight distribution, it says, and to keep noise away from the driver.

A new Tier4i engine with AdBlue is fitted and fuel consumption of this engine is said to be 10% more frugal than its predecessor.

Price has yet to be announced.