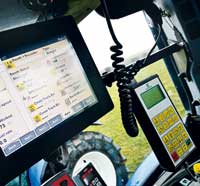 But it does have one key limitation – range. Even if for many farms a range of 10 line-of-sight miles from the transmitter is more than enough.

For a contract farming operation with distant locations and for contractors working over a large geographical area, lugging a portable radio transmitter about and setting it up on a tripod for each job is not the most convenient mobile solution.

“VRS RTK uses much the same on-board equipment as a radio-based RTK GPS system but instead of a radio module there is a modem and SIM card inside,” explains Dan Stuart, precision farming technologies guru for New Holland. “In addition to an antenna that receives the regular GPS signal, there is a small whip antenna to pick up the GPRS transmission that provides the correction data.”

While those who happen to live or work in a mobile phone reception weakspot may question the value of such technology, coverage is now pretty much universal, which makes a mobile phone GPRS signal a useful carrier of GPS correction data.

“In the UK, our precision farming equipment partner favours the Vodafone network for its Trimble VRS Now package as giving the best reception package overall,” says Mr Stuart. “Don’t be put off by a weak mobile phone signal; while it is a general indicator of the strength of the local signal, the more powerful modem and roof-mounted antenna used on a tractor will pick up the signal more easily.”

The system uses raw data from permanent reference stations – operated in Britain by Ordnance Survey and in Ireland by Trimble – which is analysed around the clock at a network operation centre.

The vehicle’s VRS RTK unit connects to the operation centre to provide its rough position and a dedicated data correction stream for the vehicle’s more precise position is sent back to the on-board equipment. As with radio RTK, the VRS RTK system provides plus or minus 2.5cm precision.

Given that it provides the same accuracy as radio RTK, comparisons largely boil down – range apart – to capital cost and subscription fees.

“The cost of equipping the tractor or combine is broadly the same so it’s a matter of weighing up the cost of a portable radio RTK system at up to £13,000 and capable of working with several units and subscription rates for individual VRS RTK services,” says Mr Stuart.

“If the phone network we offer is a limitation, you could always subscribe but use a pay-as-you-go SIM card and alter the modem settings slightly to use a different GPRS network,” Mr Stuart adds.

For Grant Watt, having access to a universally-available GPS correction signal has brought the benefits of RTK accuracy to contract operators working up to 50 miles from his base at Udny, 20 miles north of Aberdeen – often among trees and hills.

“We used a regular GPS system before and saw the benefits of steering guidance in terms of accuracy, work rate and driver fatigue,” he says. “But to remain competitive and meet customer expectations we needed to step up to RTK.” 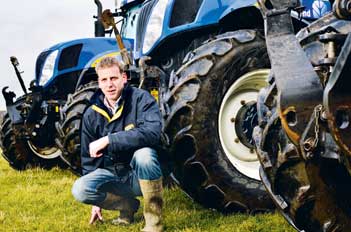 “We also use it for fertiliser and lime spreading on grassland, where there are no tramlines, of course,” he adds. “We’ve hired out a tractor and deep ridger for setting out potato land.”

Since last spring, Mr Watt has run VRS RTK to operate the IntelliSteer auto steering systems on a trio of New Holland tractors from the Dyce branch of Ravenhill – two 166/178hp 6080s and a 180/215hp 7030.

“There’s real benefits to be had from auto steering; apart from the increased accuracy in putting down tramlines, which are the foundation for all following operations, you can work just as accurately in the dark or in foggy conditions,” he points out.

“The drivers are all very upbeat about it – they can give more attention to what the machine’s doing and push the tractor on to its potential, yet come home less tired,” Mr Watt adds. “We’ve seen a definite improvement in productivity.”

“It’s frustrating that customers are unwilling to pay extra for investing in this technology,” he comments. “But it has got us some more work and it keeps us competitive in area where there are a lot of contractors operating.”

As for the VRS RTK system itself, picking up a signal has not been a problem wherever the tractors have worked. And if it is lost, as happens occasionally, the signal is soon recovered.

“With the standard Omnistar GPS, guidance would be very slow to get going in the morning and if we lost the signal it could be 20-30 minutes before it was regained,” Mr Watt points out. “With the VRS set-up, it’s lost for only a second or two.”

As evidence of the system’s time-lapse accuracy, Mr Watts cites a November sowing job that had to be abandoned in a particularly wet area.

“The operator returned five days later to finish it off and the drills matched perfectly,” he says.