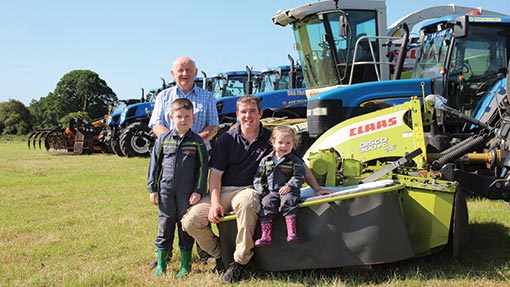 The latest in our series snooping around readers’ farm machinery sheds takes us to Northumberland. Oliver Mark visits Paul Frater (pictured front, centre), who farms with his father Stoker (back, left) and uncle William.

We’ve run New Holland tractors for a few years now and, because not many people around here run blue tractors, people recognise us when we’re driving about. Sometimes I think we’re too loyal, but it’s better the devil you know.

Lloyd and Rickerby get most of our custom, partly because they’re quite nearby in Alnwick. All of the tractors are bought through Lloyd, and we appreciate the backup from Steve and his workshop team. Rickerby sorts our grassland machinery – Claas has the job sewn up and we’re looked after well.

What farming/contracting do you do?

Stoker: It is the John Deere 2258 combine for me because it has been very reliable. If we do have any trouble, we have got John Manners combine breakers just down the road.

Our remote-control Parmiter TR34 bale wrapper. It is pretty temperamental – just like the chap who operates it.

A 50th anniversary New Holland T7.200, which looks a nice tractor. We have also just bought a Claas Liner 2900 rake, which has been busy on the grass this summer.

We’ve got a few old International tractors. The 275 is about 50 years old and works on yard-scraping in the winter and making small square hay bales in the summer.

The main tractors stay for about five years. We usually keep them for one year after the warranty finishes and do all of the servicing ourselves. Other machines are shifted if they become unreliable or expensive to keep going.

What is next on your wishlist?

A new combine – either another Deere or a New Holland. But we’d also like to add some more cows to the suckler herd, so a few extra sheds would be nice, too.

Paul: Tipping a load of straw on to a parked car in Alnwick. Regrettably the owner of the car also worked with my wife, so it was fairly embarrassing.

Stoker: I managed to hit our parked combine while mowing grass in a 20ha field, which Paul still reminds me about.

All grease nipples are a pain because the gun is always empty and you can’t avoid getting dirty when loading a new cartridge.

Last year we built a calf catcher that attaches to our Honda ATV. I do all the cows myself, so with this I can catch the calf, tag it and spray it without getting attacked by the cow. We’re going to try to make a few more this winter and see if we can sell a couple.

Paul: It is the compressor for me – you can’t go far on a flat tyre.

Stoker: The pressure washer is important for anyone running a contracting outfit. We like to keep the machinery as clean as possible – it gives the right impression to the customer and hopefully means the machinery will last longer, too.

We usually buy new tractors and telehandlers but if there’s a bargain to be had then we’ll take it. Dad (Stoker) loves searching farmyards for a bargain, particularly when it comes to bale trailers and power harrows.

Stoker: Favourites are combining and ploughing, but I will avoid round baling if I can.

Paul: I have a 56-plate Nissan Navara and it has been brilliant, but I fancy a seven-seat Land Rover Discovery to make life easier hauling the gang about.

Stoker: I have a Jaguar XF, but it’s no good off-road.

Paul: We had an R-reg New Holland 8260 that practically ran on fresh air.

A Keenan feeder wagon we bought nine years ago for £1,000 and ran for three years. We then sold it for £3,000, although the replacement wasn’t cheap. We now run a Mech Fiber 320.

Biggest myth to do with farm machinery?

Paul: Keeping machinery inside is a false economy. We try to get as much under cover as we can because it doesn’t last long if it’s battered by the weather.

Stoker: It doesn’t matter how things look. Cleanliness is very important in my opinion.

Paul: I’d go shopping for 1,000ha of arable land in the Borders with a big house.

Stoker: More land and a big villa in Spain for me.

We’ve got a handful of International 275s and a 441 in the barn. They get used fairly often doing yard scraping, but it’s not the best advert if they’re seen on the road.