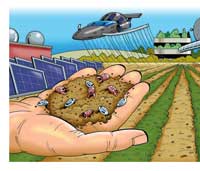 American futurist Jack Uldrich has an extraordinary vision of the future of farm technology. He explained the gist of it to Emily Padfield

There’s nothing new about predicting the future of technology. Eighty years ago, D H Lawrence warned about the dangers of our increasing reliance on machines in a poem that began with the stirring words: “They talk of the triumph of the machine, but the machine will never triumph.”

It’s looking increasingly like he was wrong, though. But it’s not just machines that are triumphing, it’s also technology that you often can’t see or even quantify. Natural organisms took millenia to evolve into what they are today but human-driven technological advances operate on a truly fast-track timescale.

According to US futurist Jack Uldrich, who outlined his vision of the future at an annual convention by precision farming Trimble, we are currently less than 0.1% through this process of change. “Ten years ago there were 25m Google searches a day. Today, there’s in the region of 25bn. That’s a 1000-fold increase.

“We are going to continue living through 1000-fold situations. Robots are doubling each year, and if this trend continues then there will soon be millions of robots in everyday situations.”

And don’t think that artificial intelligence has gone as far as it can go. The IBM-created Watson supercomputer not only beats human contestants at chess, it also learns in real time from its human competitors’ mistakes.

What does this all have to do with agriculture? Simply that machines running complex calculations such as data analysis and gene sequencing are getting faster and faster. And that means amazing technological advances will arrive that much more quickly.

Robotics isn’t new in agriculture – the Lely Astronaut milking robot has been around for several years. But if you assume the number of robots generally is increasing 1000-fold, it’s not going to take long before there are a lot more on farms. As more units are made, prices will fall, making a versatile robot a financially attractive option (no house, no pension, no benefits).

It’s already happening in the fruit and vegetable sector, with robots being used for picking and processing crops. But robots are starting to be used in many more sectors – there are also robotic slope mowers, automatic weeders and even a slugbot – a robot that powers itself by digesting slugs. No need for frowned-upon metaldehyde chemicals if this takes off.

Totally unmanned tractors are technologically possible but it will be a while until legislation actually permits this, admits Uldrich. “Google have already developed a self-driving car that has travelled more than 140,000 miles without mishap, albeit with a passenger in the back to ensure nothing goes wrong. There will no doubt come a point where totally robotic vehicles will become more viable.”

Radio-frequency identification tags (or RFIDs), which can hold and automatically download a mass of data, are becoming part of agriculture, too. Bale tagging systems that hold data on the bale’s moisture content, weight and GPS position of where they came from in the field already exist.

But in the future, micro-tags the size of soil particles will be deployed extensively in fields measuring things such as moisture, disease burden and even whether the crop is ready to harvest or not.

And it doesn’t stop there – with customers becoming more aware of sustainability, they will want to know information such as water use, inputs and proof of sustainable practices. In the USA, it’s already possible to scan one of these tags in the supermarket aisle and obtain all this information.

Companies are falling over themselves to develop systems enabling farmers to use information to become more efficient. A lot of this will centre on designing new methods of analysing this data.

Mountains of GPS-sourced 3D data is now being gathered on farm, but instead of experts analysing this data, the job will be done by automated computer systems. That will allow farmers to benefit from new techniques almost immediately.

And all that information coming from farm mapping, machines working in the field and remote sensors won’t be kept on chips, cards or memory sticks. Instead it will all be transferred to so-called data clouds – remote servers that farmers will be able to access wherever they are.

“Data will change how we do business. Cloud technology will enable farmers to access data from wherever they are,” Mr Uldrich explains.

When the first human genome was sequenced (or mapped), it cost billions of dollars and required an army of men in white coats. But, as with any technology, the more the systems developed, the quicker and cheaper they have become.

According to Mr Uldrich, genomics is going to be a huge driver for change in agriculture. Developing crops that will be tolerant to drought and resistant to disease will be a real possibility.

As for those who are against genetic modification, Mr Uldrich believes there will come a tipping point. “Those who support organic or sustainable agriculture will get to the point when the arguments will no longer stack up. They want to use less water, less pesticides and less inputs – adapting the crop is surely the way to go about this.”

Our unquenching thirst for water has rendered vast swathes of semi-productive land useless over the past century. But the big drawback of wide-scale use of desalination technology is its prodigious cost.

However, a lot of research is now going into using solar and geothermal energy sources to do the job.

“If we can power these with solar, it will open up vast areas of cropping both in the USA and in Russia and the East,” explains Mr Uldrich.

Synthetic biology combines both science and engineering and allows scientists to generate organisms artificially using genetic material. Sounds scary? Potentially, yes, but synthetic biology does not use naturally occurring genes, instead making use of custom-designed sets of DNA. As gene synthesis gets cheaper, it has become more viable to carry out such work.

One company, Synthetic Genomics, is already working towards using synthetically produced micro-organisms to produce alternative fuels. Algae could potentially turn carbon dioxide from the atmosphere (or from power-station emissions) into petrol or diesel by photosynthesis.

Not just for teenagers, social media is already playing a big part in agriculture. It’s a method of communicating with the consumer that, in the past, has been difficult to do. Now, farmers can tell the story of their farm, their products and how those products reach the shelves in a way that’s never been so easy.

“Here comes the customer,” says Mr Uldrich. “The rules are changing – social media represents the future of advertising. It’s all about trust – customers trust conversations with their friends, be this on Twitter or Facebook.”

So, will the machine triumph? The connected farm concept is not just a concept, it’s a reality on some farms already, according to Trimble. Farmers simply drive back into the yard and upload data wirelessly back to the farm office, where it’s possible to analyse this information and establish application rates, which are then bounced back out to the tractor.

It won’t be long until data tags, robots and autonomous vehicles will all be able to be controlled through the farm office, from the pick-up or even from the comfort of your home via a portable device.

And with crops becoming more sustainable thanks to genetic manipulation, energy coming from designer bugs, and customers knowing exactly what’s been used to produce their food, farming is set to go through a green revolution all over again.