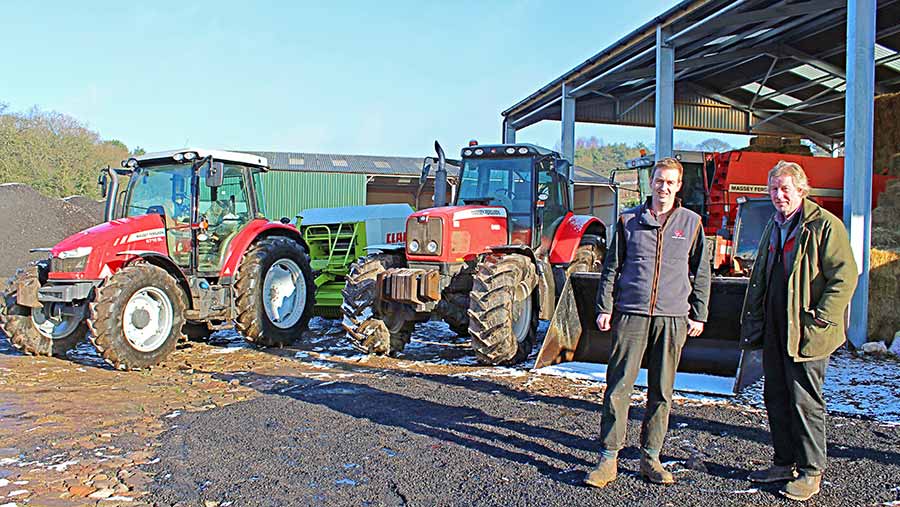 Our long-running What’s in Your Shed series heads to South Staffordshire to visit mixed farmers Ian and Luke Sadler, who run a 130ha outfit in Kinver.

Massey Ferguson dominates the tractor fleet, but read on to find out their favourite tractor, biggest repair bill and what’s next on their wish list.

Ian’s father was manager of the 325ha Webbs estate, which our farm was part of, although over the past 30 years it has been slowly split up. Ian managed to buy the farmhouse and a block of land to set up a new farm. He then moved from the council smallholding he was farming.

See also: The rest of our What’s in Your Shed? series

Most of the land was, and still is, rented, but we’ve gradually grown the business and diversified into pick-your-own fruit and running a farm shop. We also carry out various bits of contracting work and deliver our own hay and straw. One of our biggest customers is Dudley Zoo.

We’ve only ever had Massey Ferguson tractors. That’s partly because we’ve had good experiences with them, but having a single-brand fleet also makes servicing and maintenance a lot more straightforward.

As for our other machines, we tend to buy stuff that has a good reputation. As we rarely buy new we have the benefit of finding out which makes and models stand the test of time.

We buy machinery from a wide range of places, but if we’re looking to buy something fairly new we go to Keith Davies Agricultural at Shifnal.

That’s mainly due to the sales rep Trevor Davies, who’s always straightforward to work with and comes up with some good deals.

For Massey parts we also use KO Machines at Wolverhampton. The chap on the desk, Dave, knows his stuff and we can usually get what we’re after.

Our Claas Rollant 255 round baler is easily our favourite. We had it in 2015 and since then it has produced thousands of bales without giving us any problems – it’s an absolute pleasure to use.

It couldn’t be more different to the New Holland 644 belt baler we had before, which is easily our least favourite. It was a well-looked-after machine, but we couldn’t get on with it at all. Net would wrap around the rollers, bale shapes were all over the place and it would frequently jam up too.

Apparently it’s not just us though – a local contractor told us he needed to take Valium before attempting to use one.

We have made a couple of recent purchases, including a Massey Ferguson 5712 SL, which is the first tractor we have bought new.

We knew we would need to borrow money to buy a decent second-hand machine, so thought we would go the whole hog and get a new one. The deal was pretty good too – it had a list price of £72,000 and we ended up paying £48,500.

It gets used for most of our lighter work, with the 6485 doing the heavier stuff. It has plenty of power, is nice to drive and has the benefit of a warranty.

We’ve also just bought a 1998 Massey Ferguson 38 combine with 20ft header. It’s a tidy model that came from Bowland tractors at Wrexham and set us back £13,500. It hasn’t done a day’s work yet for us, so we can’t comment on how good it is. 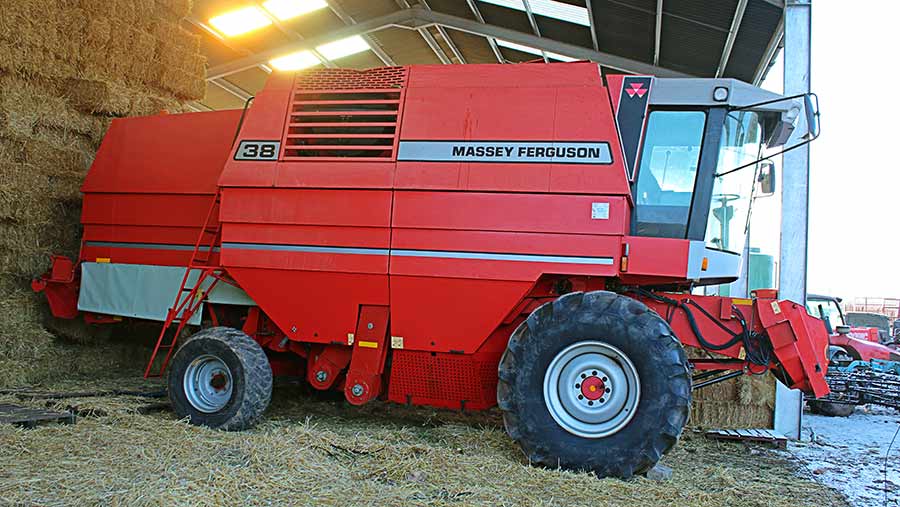 Our oldest machine is a three-cylinder Massey Ferguson 35 that mainly gets used on our pick-your-own fruit site, as well as doing the odd ploughing match. 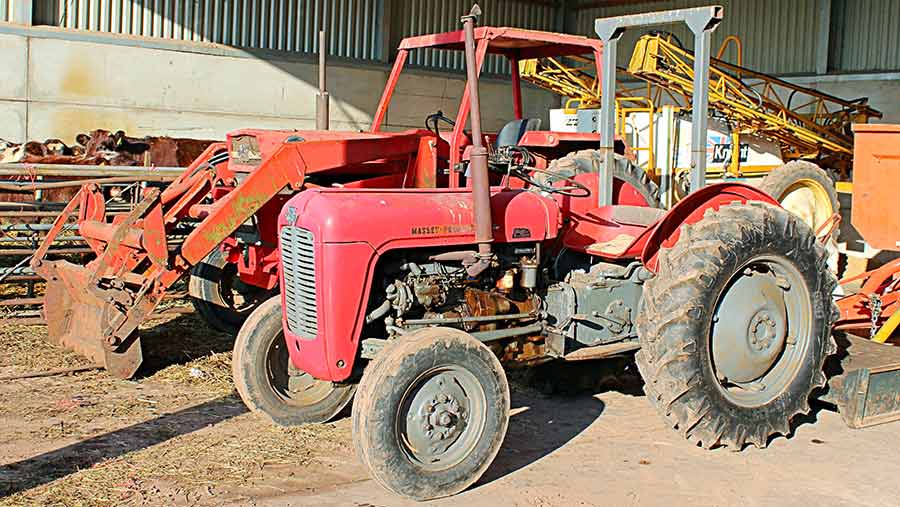 We have had it since 1991 and in 2002 we gave it a complete overhaul, including rebuilding the engine. It goes well and it’s a brilliant starter.

We don’t have a set policy, but we try to upgrade a main piece of machinery every year.

We would like to get a grain pusher for the Manitou and a set of hydraulic-folding Cambridge rolls. At the moment we’re using an old triple trailed set, which is a complete pain – particularly as we roll all our ground to push the stones in.

A combination disc drill is also on the list if we can find a decent one at a fair price. But in the meantime our old 4m Bamlett wheel-end drill is doing a perfectly good job.

What’s in the shed

We have had a couple of near misses, but thankfully nothing horrendous.

On one occasion we were towing an old trailer for someone and it popped off the hitch, overtaking the tractor on the wrong side of the road. No one was around and it came to rest safely in the hedge.

The Manitou’s brake seals also went when we were going down the road one day. The engine stalled and it started to run away, but luckily there was a long enough straight for it to come to a stop.

The Manitou is generally very good, but occasionally it has a little meltdown and costs us quite a bit to put right.

At about the time the brake seals went, we also had to fork out for a new pump driveshaft, ignition switch, shuttle lever and turbo. Including a set of new tyres. The total bill came to about £6,000.

It sounds a lot, but it gets used every day and has clocked up about 9,000 hours, so we can forgive it the odd repair bill.

We don’t come up with that many inventions, but we spend a lot of time in the workshop carrying out repairs and modifications.

These include extending the chassis on our Volvo lorry and adding a new flatbed. We also saved £1,000 by doing our own gearbox repair on a MF 3075 we used to have.

As we carry out most of our own maintenance and repairs, the whole workshop is really important to us.

One handy new addition is a pneumatic bead breaker that means we can fit our own tyres.

Baling is probably the best job as it’s so satisfying and hedgecutting is the worst – it just seems to go on forever.

We have a 2004 Ford Ranger and a 2007 3-litre Hilux. The Ford is a bit cruder and doesn’t get taken that far from the farm, while the Hilux can easily double up as a car. Both have been reliable.

The 6480 has probably been the best and we haven’t spent a penny on repairs in six years. It’s done 5,500 hours now and the only significant expense has been a full set of tyres.

We haven’t had any really bad ones, but that’s largely because we buy second-hand and avoid the ones that have a bad reputation. For that reason, we skipped the 6100-series altogether.

Probably a 4.5m Lemken Kornund tine cultivator we picked up at a farm sale for £800. We had to spend a couple of hundred pounds on it, but you see them advertised for thousands. 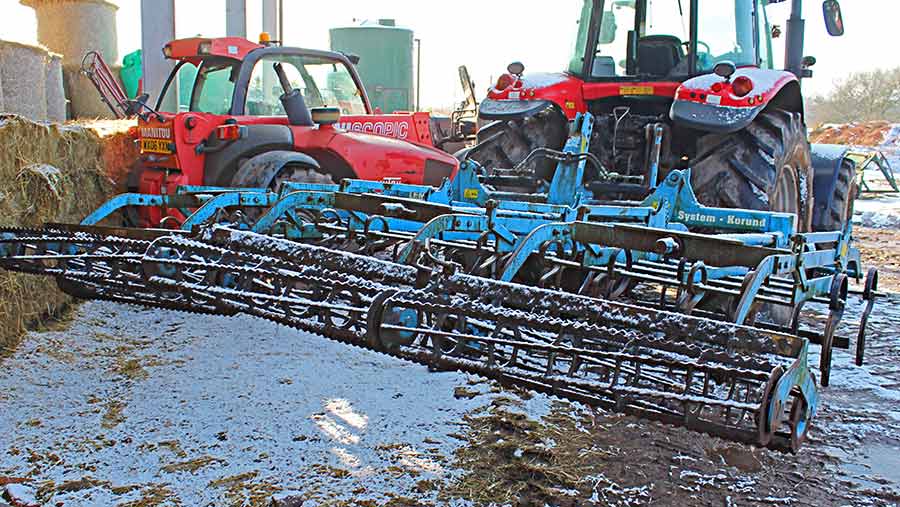 We also got our Knight 2,000-litre trailed sprayer for £1,000 and there was nothing wrong with it. The 20m boom is an unpopular size, which is one of the reasons we got it so cheap.