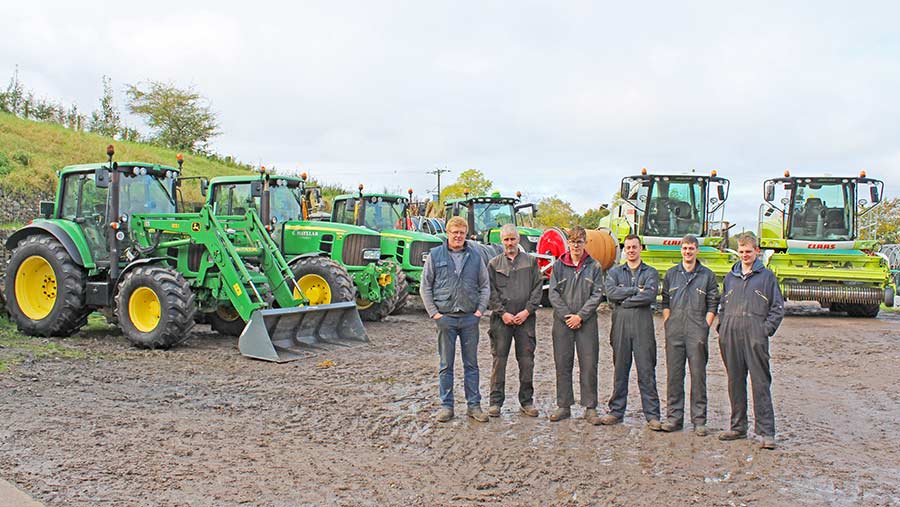 In this What’s In Your Shed?, we suss out a fleet of high-hour workhorses belonging to Cumbrian contractor Graham Hayllar.

When I left school, I started working at home on the family stock farm where we also did some contracting work on the side.

It turned out that working with livestock wasn’t for me, so, in 2002, I started my own business with my wife, Joan.

We bought two tractors from the farm, along with a few other pieces of machinery, and started doing general contracting work, as well as workshop and fabrication jobs through the winter.

More services have been added over the years and we now have a busy contracting fleet, as well as a thriving workshop side to the business. We also sell oils, filters and parts, as well as Cri-man slurry pumps and spares.

Are you brand loyal?

When we started, we had two Fendt tractors and I was Fendt through and through.

We ran them for a couple of years, adding a 716 Vario to the fleet, and they were all nice tractors. However, they didn’t make us any more money per day than other cheaper brands, and the 716 started to give us trouble – particularly the Deutz engine.

A New Holland came next, followed by a Valtra, and we had a very brief encounter with a JCB Fastrac.

We then changed to Massey Ferguson for a few years and were happy with them until the Dyna 6 transmission was launched. We didn’t take to that gearbox, so switched to John Deere and have stuck with the brand ever since.

As we buy most tractors and machinery second-hand and carry out all our own repairs, we don’t use dealers much for servicing.

However, we do buy new rakes, mowers and fertiliser spreaders from Rickerby in Penrith.

The Case trailed sprayer is my favourite and the large 3,600-litre tank allows us to cover a good area per load.

The 24m booms also follow the ground really well, which makes a huge difference on some of the fell land and allotments we spray. Both are very rough, but the booms handle the terrain easily and it’s the driver that tends to give up first.

The Shelbourne Reynolds side-discharge muck spreader is my least favourite as it’s such a nightmare to remove foreign objects that get wedged in the outlet.

That said, when it’s going well, it does a really good job of spreading sloppy muck that the rear-discharge machine can’t deal with.

We’ve recently bought a 6190R, which is our first R-series John Deere – it’s impressed us so far and the fact it’s got auto-steer is a real bonus.

I’m now hankering after a Greenstar unit for my 6430 sprayer tractor, as it is auto-steer ready and won’t be difficult to set up. Most of our spraying is on grass, so it would be a huge step up from my Centreline lightbar.

We’ve also purchased a 3m Vaderstad Rapid for direct-sowing grass seeds and stubble turnips, which has brought in a lot of work. 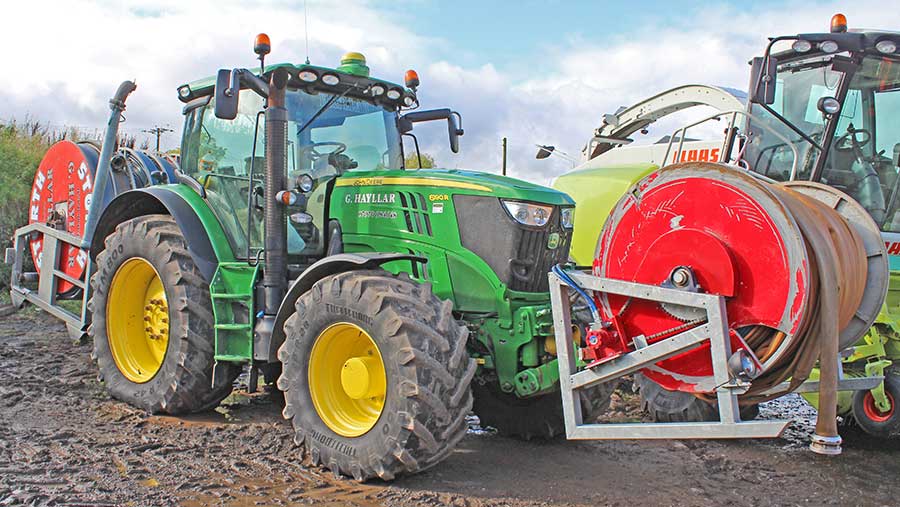 Our longest-serving machine is a home-made slurry tower stirrer, which is more than 20 years old. We built the framework and it has a Mixit stirrer at the business end. It’s provided us with work all over the country, even as far away as Norfolk.

The oldest tractor is our John Deere 6830, which we bought ex-hire with 300 hours on the clock. It arrived in November 2008 and has spent its time on slurry work, a front-mounted buck rake, ploughing, drilling and everything between.

It has now clocked 20,500 hours and, other than the usual injectors and head gasket, it’s been very reliable. 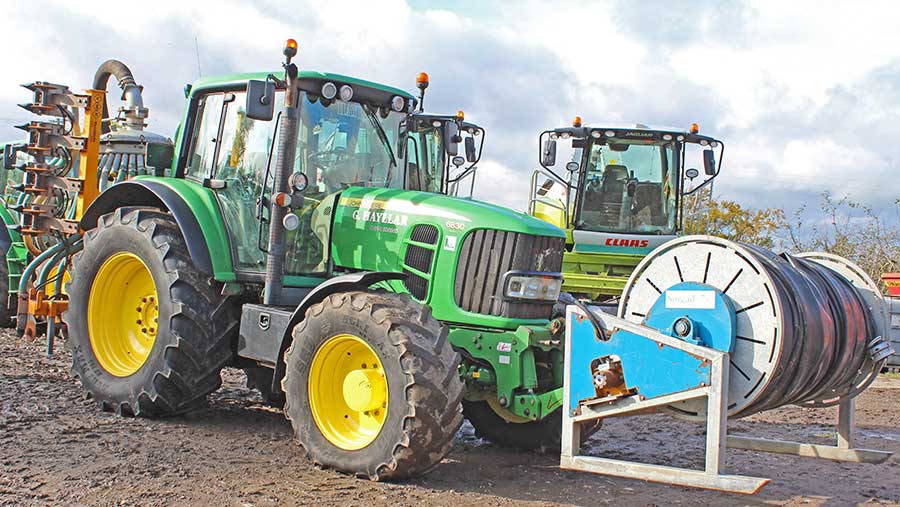 How long do you keep machines?

The rising costs of tractors and machinery means buying new just isn’t an option. At the end of the day, they all have to be paid for with the proceeds of selling milk, beef or wheat, and these aren’t worth enough to make it sustainable.

Depreciation is scary too – I looked at a second-hand tractor recently and worked out that the original owner would have lost £21/hr in depreciation alone.

Because we can repair our own stuff, it makes it a lot less risky to run older tractors, and our total running costs are much lower than the depreciation on a new one.

There’s also the option of short-term hire if we get a breakdown. I once hired a tractor for a week at £400 when an injector failed on one of ours. This meant I could get the injectors reconditioned, which saved £850 over buying John Deere remanufactured ones.

However, I do like to buy mowers and rakes new, as after three years old, they just seem to be trouble and we can’t afford downtime with the amount of work we’ve got to get through.

It’s a similar story with the KRM fertiliser spreader, which has a lot of complex electrics that could give us bother when they get older.

Having hired foragers for years, we decided it made economic sense to buy a pair of second-hand machines this season. We now have a Claas Jaguar 950 and 850, both of which have gone well. 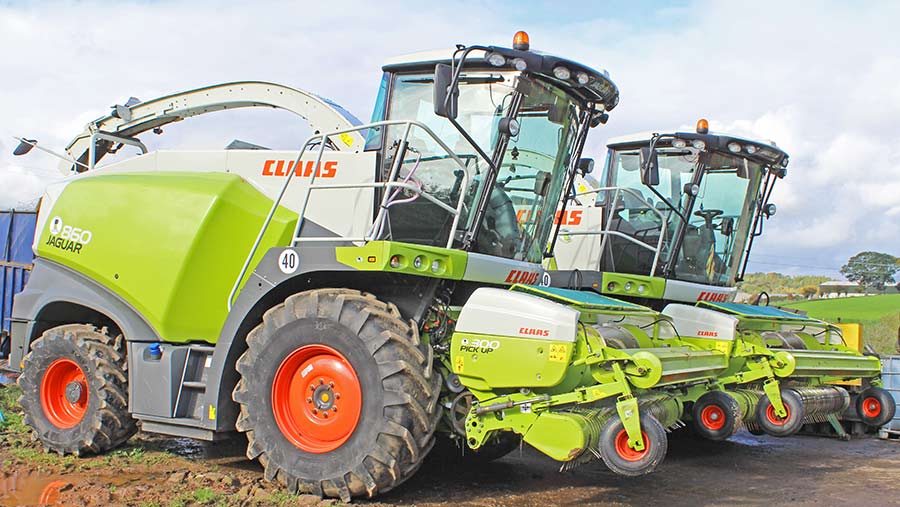 We’re always short of tractors so we’re on the look out for another R-series for spring. A second engine-driven umbilical pump and a dribble bar are also on the workshop’s to-do list.

One night, we were silaging into the early hours when I turned my tractor and trailer into what I thought was a bunch of nettles.

Unfortunately, there was a deep ditch hiding in there, and once my front axle had dropped in, I wasn’t coming out.

After a lot of laughing from the other lads and a tow from the chopper, we were off again, no damage done. The video still turns up on Facebook every now and again.

We had a 6930 and one of the brake discs failed, causing fillings to go through the transmission.

We did all the repair work in house, which involved pulling out the Auto Quad gearbox box, cleaning it out and replacing various damaged components.

It was soon back in action, but the parts bill ran to about £4,000 – I dread to think what it would have cost in a dealer’s workshop.

We make all sorts here, including bedding machines, silage pushers, slurry reelers, spread bars, and pumping trailers featuring both an umbilical pump and a compressor.

But our slurry tower stirrer is still one of the best – made over 20 years ago and still doing a great job.

Marcus, Owen and Chris – there isn’t much that Owen and Chris can’t repair (including engines and gearboxes) and Marcus can make just about anything that involves welding bits of metal together. I just put the ideas together and he makes it. 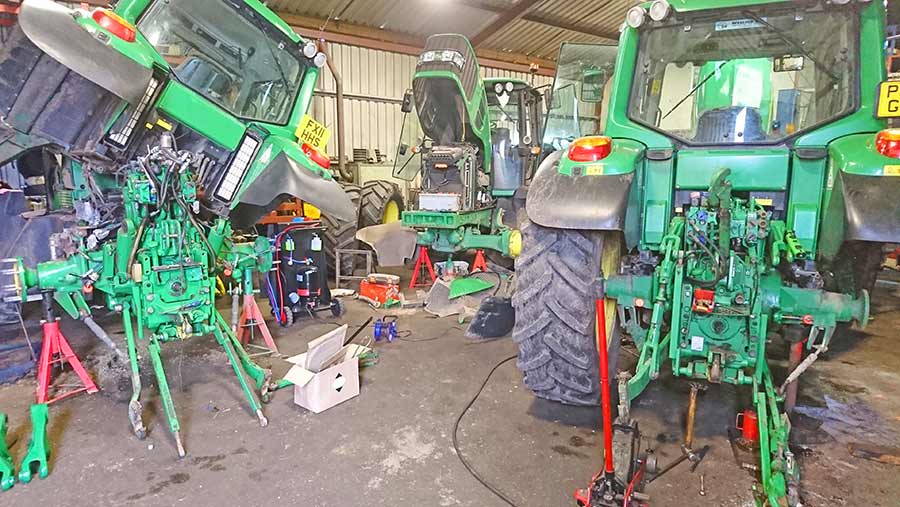 Spraying – it gets me away from the madness of silaging and I get to see crops develop through the season.

Leading silage is my least favourite, as I’m getting too old for bouncing up and down farm tracks – it’s a young man’s game.

I’ve got a 2007 Ford Ranger XLT that’s done about 150,000 miles. It pulls well, is nice to drive and has been reliable. However, the chassis did need a bit of welding to get it through its last MOT. We’ve also got a Vauxhall Vivaro van, which is kitted out with tools for call-out repairs.

Of the current crop, I really like the 6430 – it’s a small handy tractor, but is capable of keeping up with the bigger tractors when required.

It does all the spraying work, pulls the grass seeder and the fact it’s fitted with a loader means it’s constantly in use. 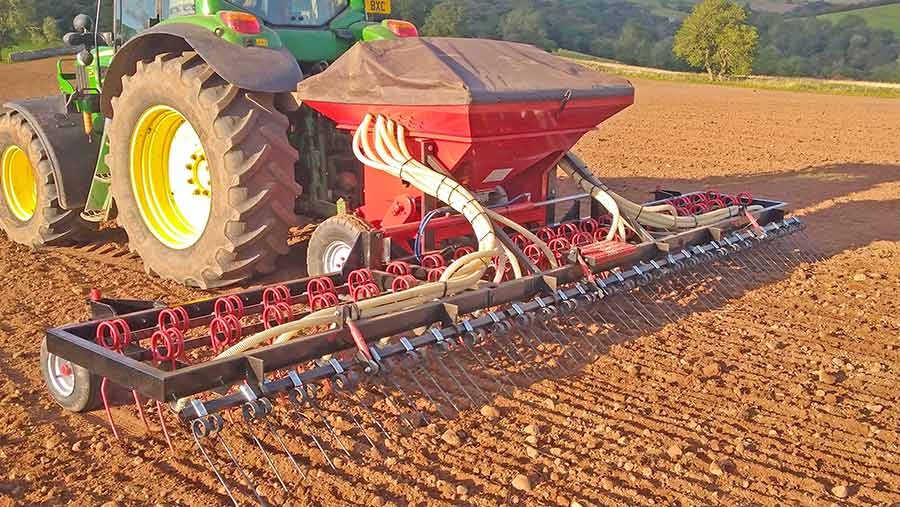 However, my all-time favourite is the Fendt 614 LSA we had many years ago.  It was a big tractor for its day (hence it being christened Big Bertha) and it was lovely to drive, apart from the lack of air conditioning.

We were brief owners of a JCB 2140 Fastrac, which, in theory, ticked a lot of boxes  – it had a demount sprayer, a front-end loader, standard, row-crop and floatation tyres, and I thought it would be great on the umbilical job through winter.

It was driven home from Northumberland one Saturday in November, we dropped the sprayer and loader off, and by the Monday morning it was out with the umbilical spread bar.

By dinnertime it was stuck; by the evening, it had broken down, and by Christmas, we’d sold it.

Probably our tandem-axle 2,500gal tanker, which we bought purely as a way of trading in a grain crusher that we couldn’t seem to sell privately.

It turned out to be a great asset and it’s out every week, emptying local auction market wash tanks and septic tanks.