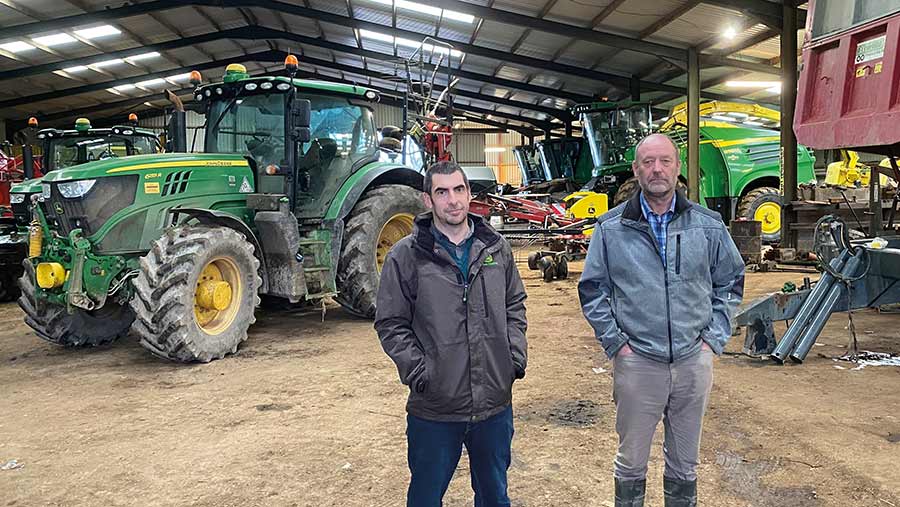 Richard Barrow and Andrew Patt of A&B Contractors reveal the good, bad and ugly of their machinery fleet, which includes 19 tractors, two foragers, a pair of Deere combines and a vast list of implements.

Richard: I started out working for my godfather, who was a contractor in the mid-1980s. Sadly, he died in a tractor accident in 1988, so I eventually decided to set up on my own.

I borrowed money from my gran to buy a tractor and hedgetrimmer and, before long, I’d assembled a small fleet of John Deeres that allowed me to expand into grassland services – an 1130 on a wrapper, 2850 for baling and a 1640 with a loader on the front.

My timing was fortunate, as I hit the round baling/wrapping market just as it was kicking off. We’d work night and day during harvest and often managed to produce 27,000 bales a year.

Since then, we’ve slowly added tractors and drivers to the point where we now have enough work for 60 people at peak times.

We also run eight lorries through our A&B Transport division, shifting everything from straw and bracken to sand and stone, as well as machinery from the port at Hull to John Deere and New Holland dealers.

We have a groundworks service for houses, silage clamps, slurry pits and milking parlours, too, and our Robocut mower does a fair bit of work for the National Trust and other conservation groups. 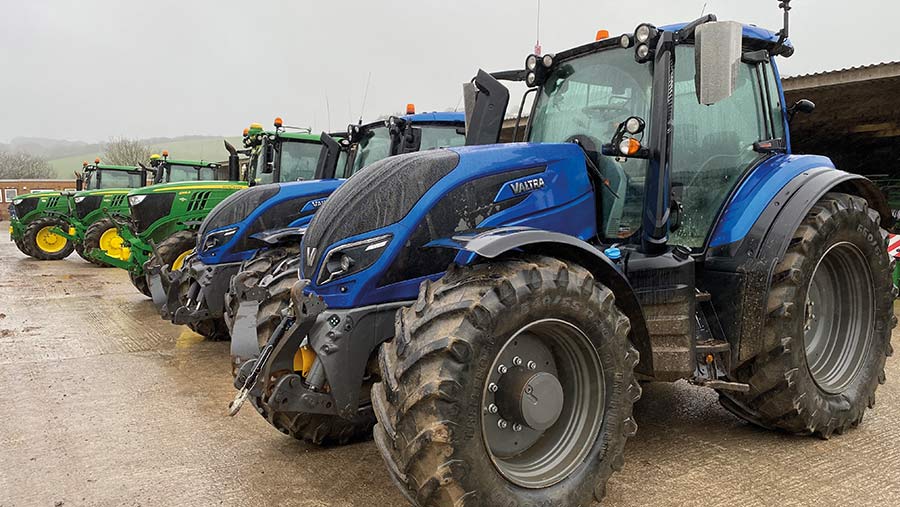 We’ve traditionally stuck with John Deere for the tractors – we once bought 15 of them in a single deal back in 2005 – but not to the point of being blindly loyal.

In 2017, we made the decision to switch to Case, which turned out to be a bit of an error. We wanted the tractors to have an exhaust brake to reduce tyre wear on the road, air for the trailers and a 50kph transmission, and John Deere couldn’t match the spec on a 6140M at anything close to a competitive price.

However, the Puma 150 caught fire and the Maxxums suffered from constant brake problems.

We’ve kept one of them as it’s on low hours and only has a 40kph gearbox, so the brakes aren’t such an issue. It ran the hedgetrimmer last year and is handy for getting into some of the smaller fields.

The rest were replaced by Valtras – we now have seven in total – mainly because of their price, spec and the fact that the local dealer is opening a depot in our yard. Our first reverse-drive Valtra, an N154, didn’t see a spanner in its first year and still runs the timber crane.

The combines and foragers have been supplied by John Deere since 1999. We previously ran Claas machines but, after making three long trips for spares in one day, I decided that the dealer was just too far away.

Smallridge Bros at Barnstaple for John Deere, Alan Snow for the Valtras, and Andrew Symons supplies and services our New Holland and McHale balers.

We’ve certainly found that it’s worth spreading our business among several dealers, not least because there’s a chance of getting a more competitive deal. 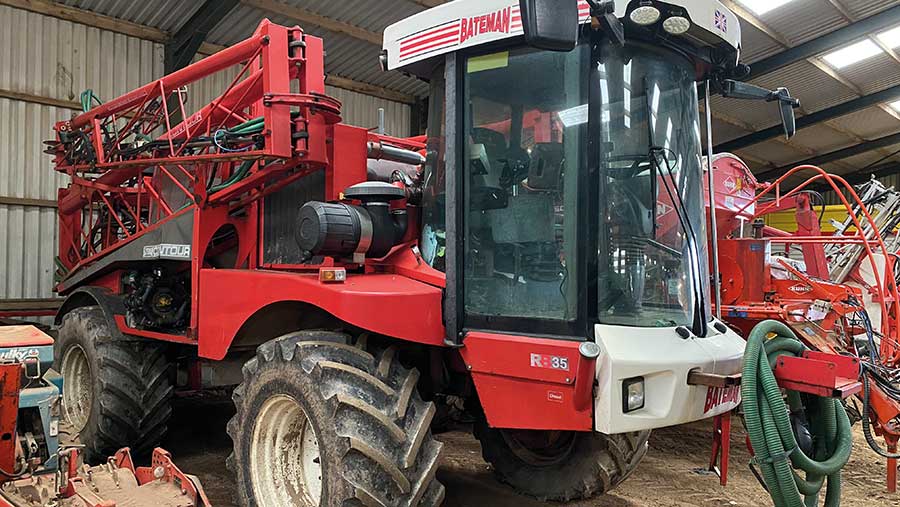 The Bateman RB35 self-propelled sprayer (above). It’s streets ahead of the RB25 it replaced, and the 4,000-litre tank means I can now do a 20ha block without stopping.

Bateman sprayers are built for contractors and are so simple to operate and fix. I like the John Deere engine and this model has a brake pedal, which is useful on some of the hilly land we work.

We also have the security of Bateman being right on our doorstep, so any problems are sorted quickly.

Ironically, my least favourite is also a sprayer – a Frazier Agribuggy Phantom. It came in 2008 and, although the spray pack was fine, the tractor unit suffered with endless problems.

The Ford engine played up, the ZF gearbox was troublesome and we went through loads of half-shafts, which I think were built by Land Rover. Basically, it just wasn’t man enough for the job.

Kellands then released a new Agribuggy with the promise that it had fixed the axle issues. That turned out to be true, but the engine and auto transmission were still not up to it.

In the end, it stayed for 18 months before we bought the RB25, which subsequently went on to provide seven years of reliable service. 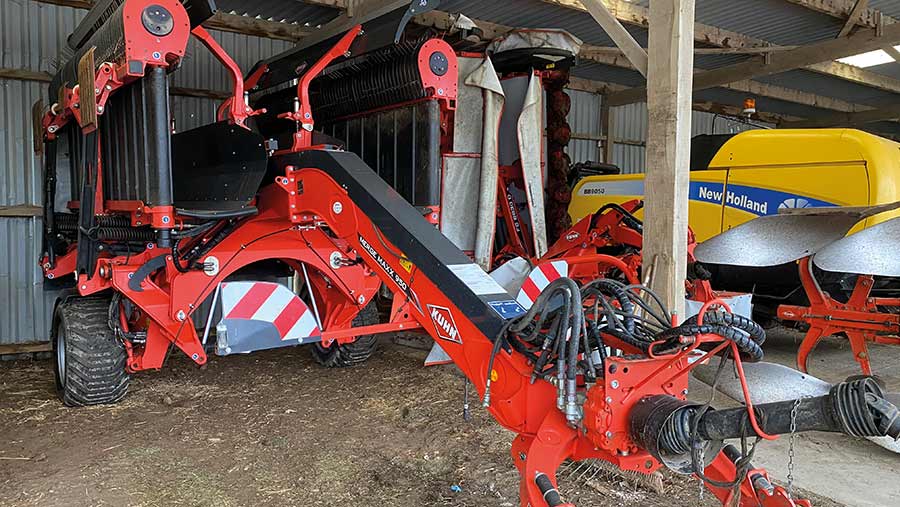 A 2008 4m Kuhn Speedliner drill, which is largely the same as the Vaderstad Rapid it has replaced, albeit with slightly wider coulter spacings. It wasn’t a planned purchase, but the dealer put together a pretty keen package.

The Speedliner is built like a tank and, while we were always replacing the disc bearings on the Rapid, it has greaseable versions that look like they’ll last much longer. The spare parts should also be a good bit cheaper than Vaderstad’s.

We invested in a brand-new 9.5m Kuhn Mergemaxx this year, too. It means we can make huge swaths from 90ft of grass, which is enough to put the John Deere 8500i forager on its knees.

The plus side is that there’s far less soil compaction because the trailers and harvesters don’t have to run all over the field. Grass contamination has also been slashed from 8% with the rake to just 2% and we go through far fewer forager knives.

However, it’s a bit of a Marmite machine and needs a good operator to avoid annoying the forager driver. 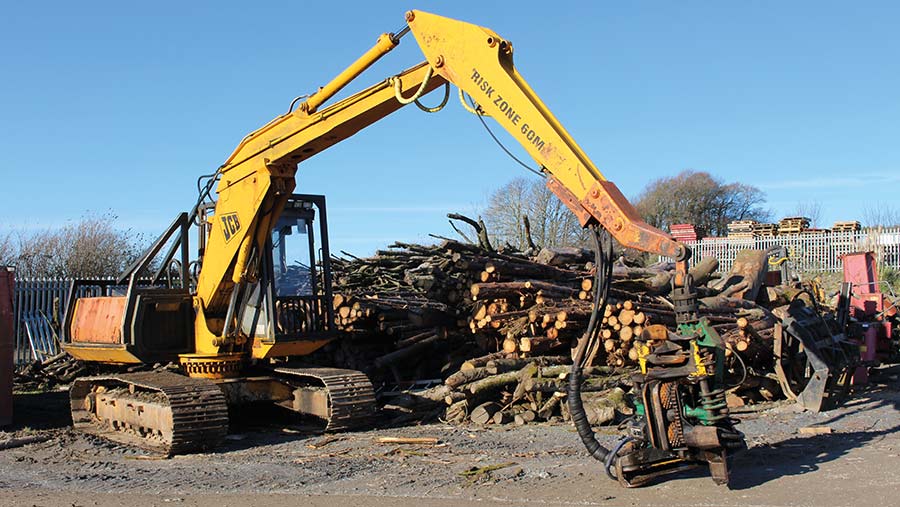 We’ve got a 1990 JCB 814 Super excavator fitted with a timber head (above), which predominantly harvests wood to be chipped for biomass boilers. The 14-tonner arrived five years ago and works alongside a Valtra tractor with Ryetec timber trailer and crane.

We have no set policy – it depends on workload and reliability, no matter whether it’s a tractor or a tedder.

The Case tractors, for instance, all went at 2,500 hours because of their constant braking problems. By comparison, we had a John Deere 6830 that stayed for 14,000 hours. In fact, we’d probably have been better keeping it longer, as the 6170R that replaced it has been nowhere near as good.

Having said that, this is the first time that we’ve had a vast majority of the tractor fleet within the protection of a three-year warranty.

On the plus side, it’s one less thing to worry about and we may well end up moving the Valtras on with a bit of the warranty intact, but we’ll see how it goes.

We’ve taken on more arable ground, so it would be nice to upgrade the combine – though it probably won’t happen in the present economic climate.

It delivers a cleaner sample because it has a bigger sieve area in relation to its header size, but will only manage 15ha/day, versus 20ha with the 550.

However, we’ll always be limited by the size of gateways, which can cause us real headaches.

One of our drivers forgot to fold the booms up on our little 12m mounted sprayer after doing the game plots in the dark. It wasn’t the end of the world and we managed to get them welded back together – but then he proceeded to do exactly the same thing a couple of days later. Fixing it wasn’t such a laugh the second time around.

We’ve had a few fires over the years – the most recent was a McHale Fusion that ended up being a complete write-off.

One of the bearings on the side of the rotor got hot and sent the lot up in flames. Fortunately, the driver managed to get the tractor off, but the fire brigade couldn’t get to it as access wasn’t great.

We’ve also had an ongoing problem with the T550 combine’s engine. It was popping and banging during the summer, and the diagnosis was a dropped piston ring.

So far, the cost of a full engine rebuild has come to £10,000. That included a new turbo mid-season and an EGR valve after harvest, but it’s still not right – so the bill will probably get bigger… 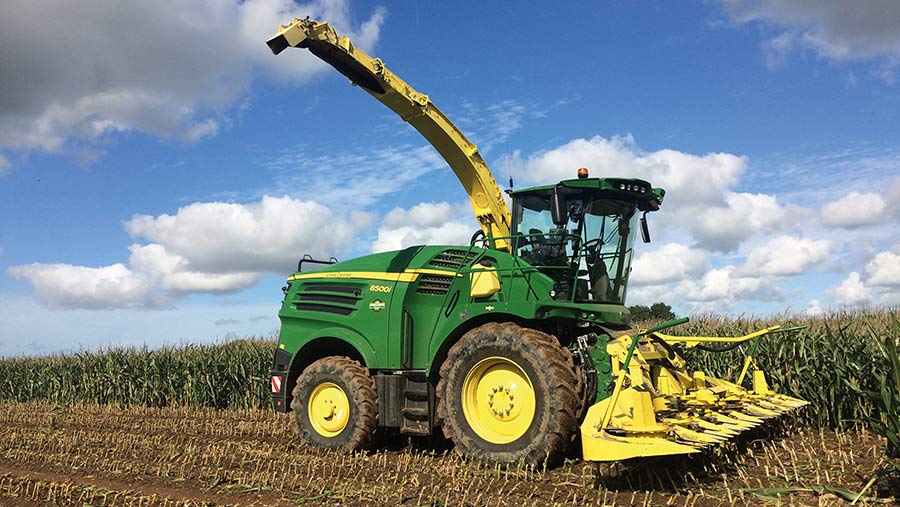 One of our workshop fitters, Leroy, converted a John Deere combine header to fit on a 6750 forager when we first started harvesting wholecrop. We used it for a decade and only got rid of it a couple of years ago when we invested in a purpose-built Dominoni header.

For transporting it about, we shifted the wheels to the back of the header trailer and used to drop them in a hole to make it easier to lift the table off. I towed it with my Isuzu pickup – until the weight of the rig caused the chassis to snap in half.

The welder gets us out of trouble time and again, even if it’s for short-term patch-ups.

Spraying is always enjoyable. My least favourite is umbilical application. We sometimes have to pump slurry 2km and a lot of our dairy customers bed on sand, which is like running grinding paste through the pumps.

The pipes cost a fortune, too, and the job rarely makes much money. 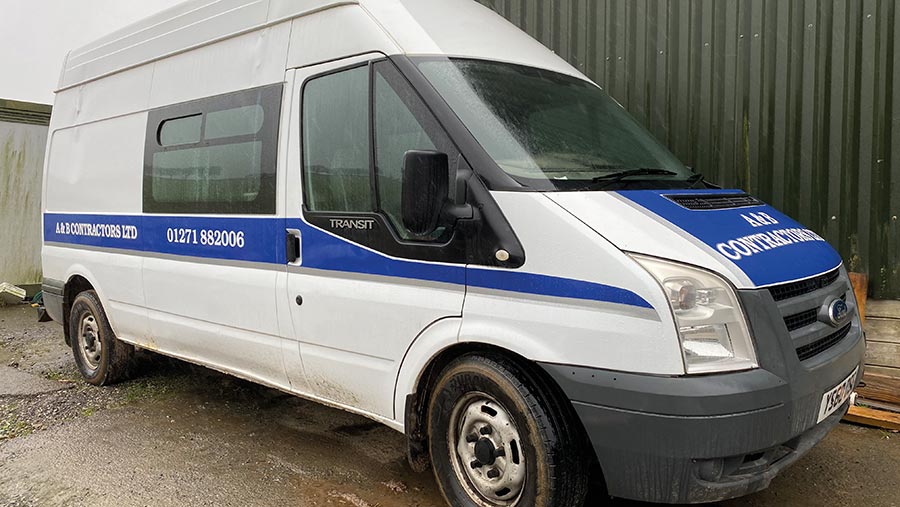 It’s now an ex-Network Rail long-wheelbase Ford Transit service van, which only cost £2,000 and has paid for itself 10 times over. I actually bought it to carry everything I need for rallying my Subaru Imprezas.

It’s got a kettle, microwave, generator and most of the tools necessary for any in-field emergencies.

I recently got it sign written, so customers don’t panic when they see an old Transit trundling into the yard.

We’ve also got a Ford Courier van and a 3.2-litre Ford Ranger Wildtrak, but I haven’t been that impressed with it – it’ll only do 15mpg.

Without doubt it was our E-reg John Deere 2850. It was a year old when I bought it for £18,000 and had a decent spec including a 40kph transmission and air-conditioning. It was bulletproof and did everything.

We paid the price for not spending extra on a Powr Quad gearbox – instead it had the Syncro Plus, or “synchroshit”, as we called it – four ranges with three gears on a lever.

The cables seemed to constantly stretch, so changing gear was a nightmare, particularly on buckraking jobs. It didn’t have a splitter on the transmission, either – so was a bit of a step backwards at the time.

The Transit van mentioned earlier. It cost peanuts, has only done 99,000 miles and, now it’s had a respray, is in good nick. I didn’t realise quite how handy it would be.