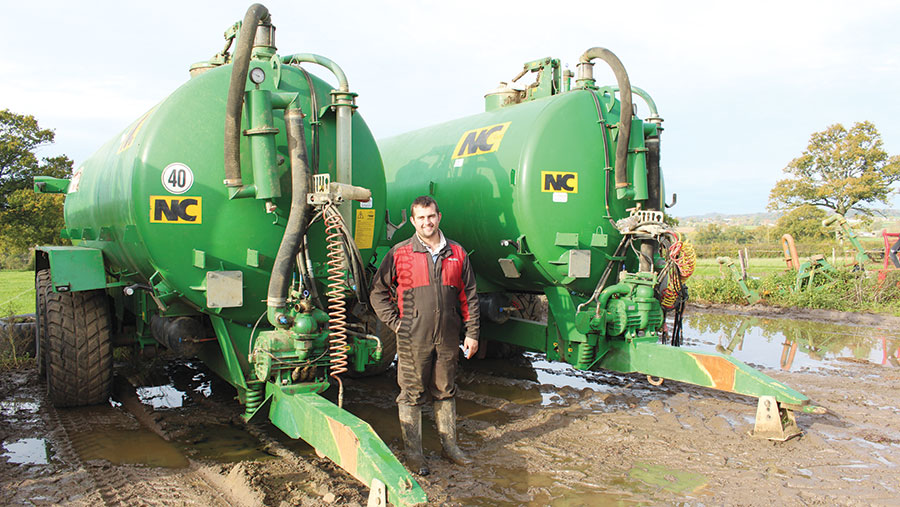 Owner Tim Hiscock has amassed a fleet of six Valtra tractors all working for more than 2,000 hours a year, mainly on slurry spreading and baling tasks.

The firm operates in a 20-mile radius of the base near Sherbourne and, due to low NVZ restrictions in the area, slurry spreading is a year-round job.

We have stayed pretty loyal to Valtra over the past few years, but my first tractor was a New Holland, and we ran a fleet of them before gradually switching to Valtra.

When I first started, I bought a slurry tanker and hired in a tractor to run it.

The Valtra machines aren’t any cheaper than the New Hollands, but they are turning out to be very reliable and dealer backup is a big factor, given the hours we put on them.

I buy nearly all my kit through CJ Cox in Sturminster Newton. They are dealers for Valtra tractors, as well as NC Engineering tankers and Krone balers.

I also hire an older tractor from them when we get a bit short.

We try to do as much servicing as possible, but if we need an engineer, they are usually out the same day.

The GEA Houle super pump has massively sped up our tanker spreading operation. We topload all the tankers via the pump, which stirs the slurry at the same time as sucking it out.

It makes the tankers a bit dirtier than loading via a hose, but we can do in excess of 150 loads or 3,000cu m in one day.

Most of the guys moan about using the rear-discharge muckspreaders, as they get the tractors filthy.

Recent additions to the fleet include a radio-controlled engine pump for the umbilical work, which ties in with the 12m Mastek dribble bar to make the whole process a bit more accurate.

I’ve also invested in a Tanlake slurry flow meter to help us invoice for the work we’ve carried out and show the customer exactly what has been spread.

It allows us to input a target rate and the system advises the driver on forward speed to maintain accuracy. 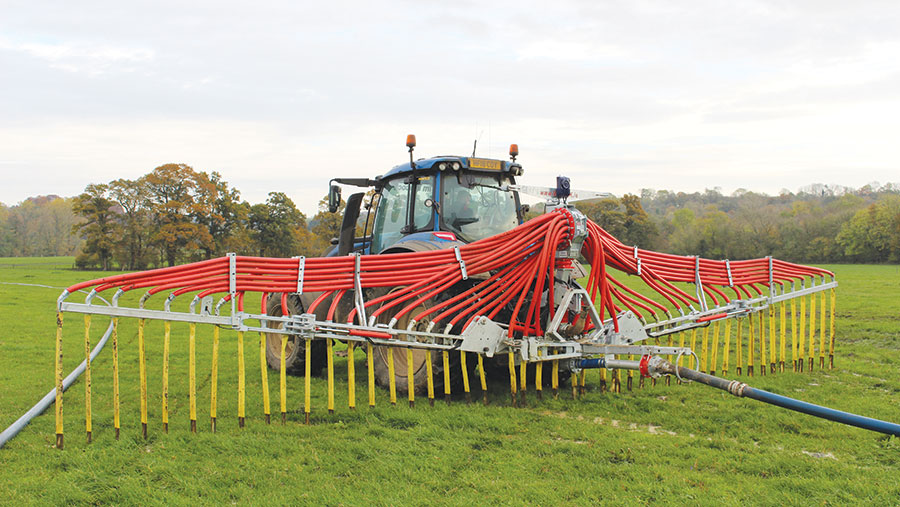 Our tractor fleet is fairly up to date, so it would have to be the 1998 Kverneland five-furrow plough. It does about 80ha/year mainly on a small piece of contract farmed land I have just taken on.

How long do you keep machines for?

Usually we will chop them in before 6,000 hours. It comes down to cost of change, more than anything else. We need reliability, so if it makes sense to upgrade, we’ll usually do it.

We tend to spread slurry most of the year, and are as busy in the winter as the summer. This means every tractor will do a minimum of 2,000 hours/year, with one of the T234s doing 4,500 hours in just over 18 months. 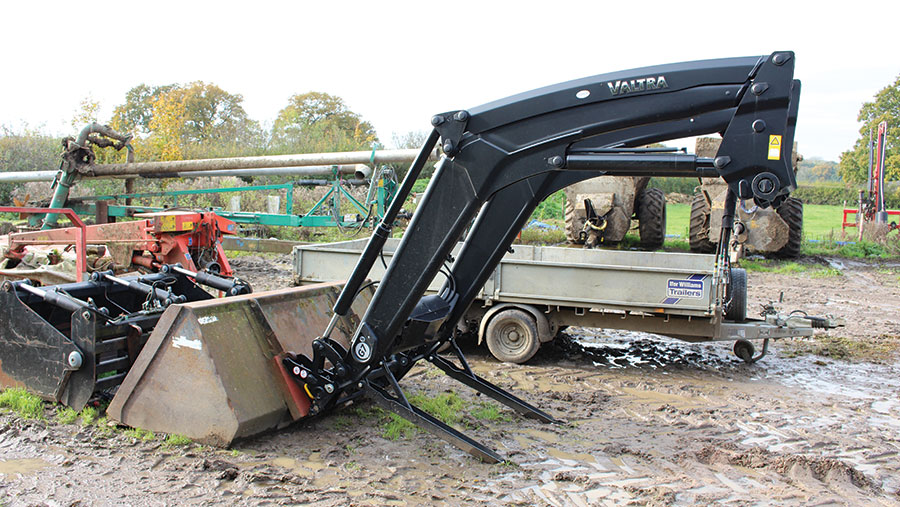 Five years ago, I was hauling straw in the Marshwood Vale. It’s an area I’m not overly familiar with, so I was using a satnav to get me from the field to the farm.

I was fully loaded and the satnav took me down a small single-track road, with no chance of reversing out. Overhanging trees ended up swiping off the top layer of bales.

It was when we still ran New Hollands – one of our T7.210s came into the yard, but the operator hadn’t clicked the handbrake on properly before he had jumped out.

The tractor started to slowly roll down the yard and came to a stop after hitting a tree.

The angle it hit the tree at did some pretty hefty damage and managed to completely pull the front axle off the tractor.

I still think back to it now and wonder how the damage was so significant, as it was rolling pretty slowly. The eventual bill was more than £20,000.

Our workshop is fairly small, but we have a decent selection of tools to get us out of trouble. As with most farmers, the basics such as oxy-acetylene and the MIG welder are well used.

We try to do most of the servicing ourselves, including stripping down and reassembling the tankers.

If the deal is right, then yes. Quite a few of our tractors are either used or ex-demo. We also bought both our balers second-hand.

It probably seems a strange one to most contractors, but I really enjoy hauling bales.

None. If I don’t enjoy it, we don’t offer it as a service.

A 2014 Nissan Navara that has covered about 35,000 miles. It is just starting to show signs of breaking in half, and I’ve had the letter from Nissan asking me to bring it in for an assessment.

The dealer offered a straight swap for my 10-year-old Land Rover Defender and, given the Navara only had a few thousand on the clock, it was a real steal. 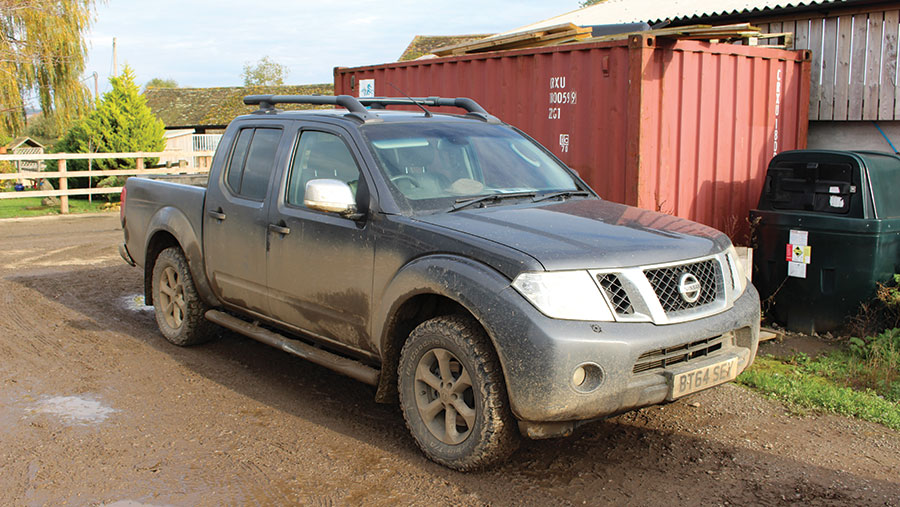 The New Holland TMs were real hard workers. I owned a 140 and 155 and the simplicity of them meant between us we could fix almost anything. They sounded great and the engines were strong.

Not sure this answer is allowed, but the New Holland TMs were also the worst. They spent a lot of time in the workshop with clutches, brakes, spool blocks and synchros all causing huge issues.

We’d put two or three sets of brakes in each one, as they just ate them for fun. In comparison, one of our old Valtras did more than 9,000 hours and never needed a single set. The TMs really were a Marmite tractor for us.

Probably the Navara – it’s nicer to drive than the Defender and I didn’t pay a penny to get it.

I should also mention our 2007 Case LBX 332 baler, which was new to us last season. I bought it from a local contractor and it pumped out 12,000 bales in the summer without having a spanner laid on it.

We’ll get it in the workshop this winter for a good going over.

I don’t have any, but my dad, James, has a Massey Ferguson 135 in original condition with matching MF trailer, as well as a fully restored Fordson Major.