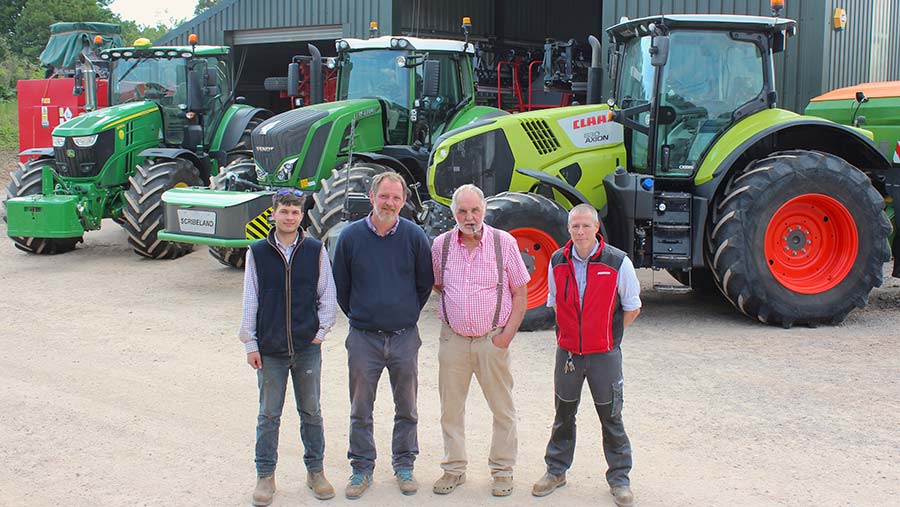 The latest in our long-running series features the winner of FW’s Contractor of the Year gong way back in 1992.

We find out the machinery highs and lows from Tony and Bruce Goodsell’s Scribeland Ltd outfit.

Tony: I was a farm manager but realised I’d need to win on the football pools to have my own farm.

Instead, a small contracting business with a Unimog and a couple of tractors went up for sale just a quarter of a mile from our site now, so I saved a month’s salary and borrowed £5,000 from the president of the rugby club I was playing for to buy it.

Our base has moved several times as we’ve taken on different farms with better premises. After 32 years in the game, a 10ha site came up for sale and I bought it, so I finally have my own farm – albeit a small one.

We built the yard and have been lucky to find great staff, most of whom have eventually gone on to management positions elsewhere (or retired).

At our peak we covered over 2,000ha, but rent changes and farm sales mean we have settled at around 1,100ha.

Once we find something that we like, we stick with it. Early on, it was Mercedes Unimogs and MB Tracs – the latter’s big cab and storage space on the back made it the perfect contracting machine.

When they were discontinued, we moved to Valmet and then Claas, from whom we’ve always had unbeatable service.

However, we didn’t think Claas was pricing its tractors competitively, so we bought a John Deere to give them a bit of a kick up the backside.

They were also left behind on the technology front, which is why we bought a Fendt and ended up with three different tractor brands.

Olivers at Micheldever and Hunts near Odiham are always there when we need them, as is Lister Wilder. 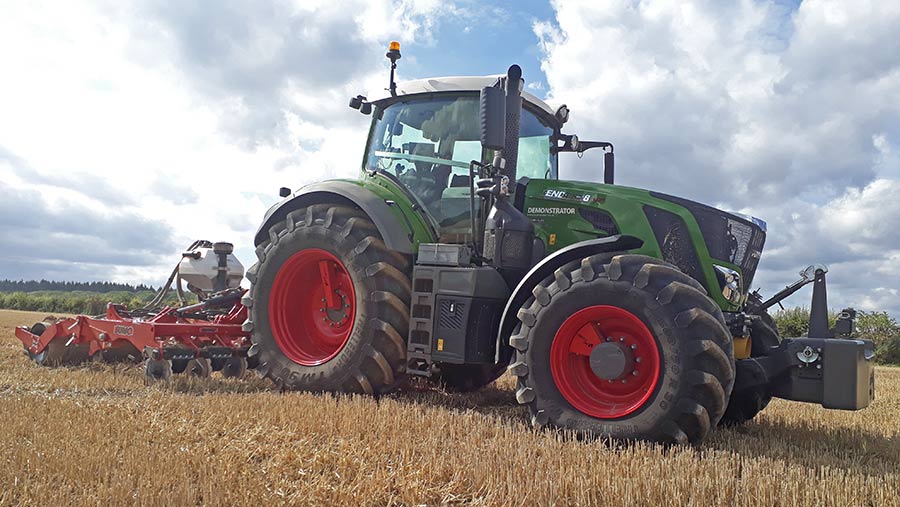 Our second Fendt – the 828 – arrived last August and is a dream of a machine. It beats everything else hands-down.

As for least favourite, the Claas Challenger 75E flat-track crawler was comfortable for its time, particularly when driving over cultivated ground, but was outpulled by tractors packing 100hp less.

We’ve also had a string of Land Rover Discoverys that can be a nightmare to work on. Tony currently runs a Td5 Disco 3 and gives it a fair bit of abuse, so it often ends up on the workshop ramps.

We’ve just ordered a mounted Kverneland EO85 seven-furrow plough. It’s an on-land/in-furrow version that’s equipped with a hydraulic depth wheel so it will work like a semi-mounted and is specced with hydraulic vari-width and auto reset.

We demoed Maschio, Lemken and Kuhn ploughs, but we’ve been KV for years and didn’t see anything that would convince us to switch.

The Kramer telehandler is also a fairly recent arrival. We bought it as part of a package with the Deere 6250R so got a pretty good deal.

Our old Claas Scorpions were very reliable and cost us very little over 10 years, so it made sense to stick with the Kramer-built machines. 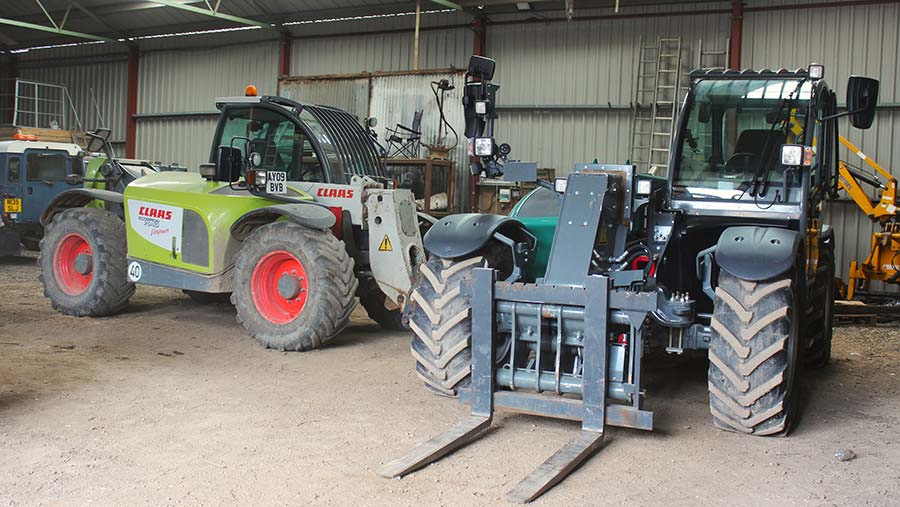 When we first bought the Unimogs (at one point we had three, plus four MBs) we saw it as an investment – they were sought after and held their money, which provided a decent safety blanket in the topsy-turvy world of farm contracting.

It’s been through a couple of clocks so we have no idea how many hours it has done, but we must be near the 20,000-mark.

Frontline tractors stay for five years to match the warranty. Breakdowns have the potential to be very expensive, so extending warranties to five years keeps us safe from any nasty surprises.

The Lexion combine has been due for replacement for a few years – it’s usually on a five-year cycle, too – but keeps being pushed down the priority list. It is now eight years old and does the job fine, though eventually we’d like a bit more power and a better straw chopper.

Maybe a combine, but a new cultivator is also high on the list. We’ve got our eyes on a 4m Kuhn Performer, as it’s one of the few that allows the discs, tines and packer to be controlled individually. Kockerling’s 6m Allrounder could also be a candidate.

Tony: We bought an early-generation Simba Solo in the mid-1990s, but it regularly sheared the bolts on the drawbar and once broke free on a country road. After making a nuisance of myself at a Tillage event, we found that other customers were having the same problem.

Simba never really sorted it, so we ended up welding shackles to join the tractor to the implement to make sure it stayed attached during transport.

It happened to be our first ever John Deere tractor, which was unfortunate, and it was five years old and just out of warranty.

But to be fair to Deere, they acknowledged that there was a problem and helped us with half of the cost – it’s this kind of support that encourages us to pay a premium for both it and Fendt machines.

DJ designed and built a loader attachment to lift and fit the Fendt’s wheel weights that makes it a one-man job, rather than having two or three people manoeuvring them precariously with a set of pallet tines.

It’s made from an old cultivator stub axle with three locking arms to stop the weight sliding off.

The weight can then be turned to line up with the bolt holes, which helps negotiate the fragile check vales for the Variogrip tyre inflation system that sit in an awkward recess. 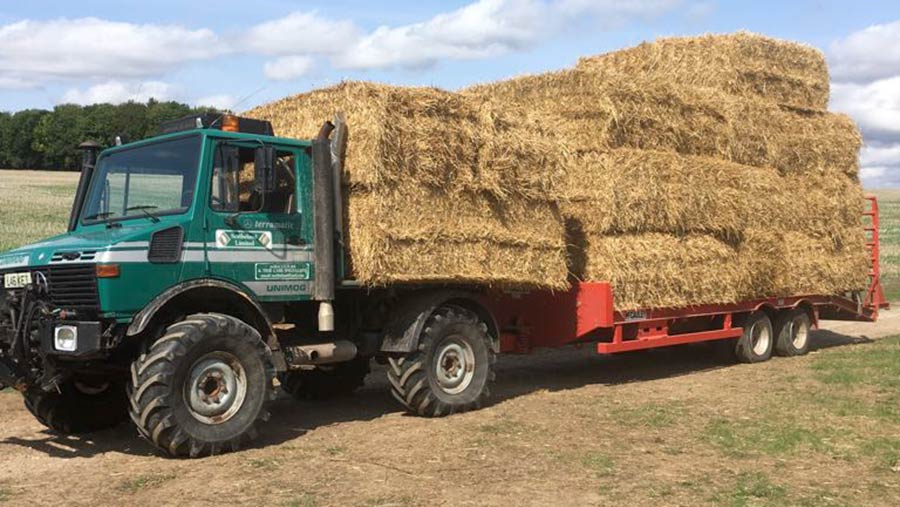 Like most arable farms, the MIG welder and oxy-acetylene torch are invaluable. We picked up some of our other useful items – a lathe, pillar drill and band saw – from a local engineering firm for just £1,000.

That price also included a stack of stock steel that we’re still working our way through.

The car lift is also handy for working on the farm’s vehicles, particularly Tony’s Discovery.

Tony: Combining – for the hour I get when Bruce has his lunch – is great, but I’ve always hated cleaning the grain store.

DJ: It’s great to see how the crop is doing while spraying. Conversely, grain carting isn’t very mentally challenging, so I like to avoid it when possible.

We’ve got a 2-litre VW Amarok (14-plate) with an eight-speed auto gearbox, which is slick and plenty fast enough.

There’s also an N-reg Land Rover Defender that we’ve had from new and has now done 189,000 miles, and Tony’s Discovery, which was immaculate when it arrived but has since been heavily abused.

Tony: County’s 1184 was brilliant in its day. It was the first tractor with a proper flat floor and was a real step up in comfort. It also pulled like a train and sounded superb.

However, they did have a habit of breaking in half. After I slammed on the anchors to avoid a flock of sheep in the road it started leaking oil heavily.

This happened just before I sold it, so I bunged the lorry driver an extra few quid to make sure he was very gentle when unloading it at the other end.

DJ: There’s no beating the Fendt, which is miles ahead of the competition in terms of comfort and technology, such as the Vario Grip system.

A 2006 Renault Atles that pulled really well but was seriously uncomfortable.

It provided cheap horsepower and if you could just turn up to a farm with the tractor ready to go it was fine. Getting it from A to B was a different story – it was like spending an hour in a tumble drier.

We’ve had a few steals over the years. The 14t Richard Western trailers with commercial-spec axles have proved a particularly shrewd investment – we bought them in 2009 for £9,000 and could probably sell them for a lot more. And in that time, they’ve only had one set of new tyres.