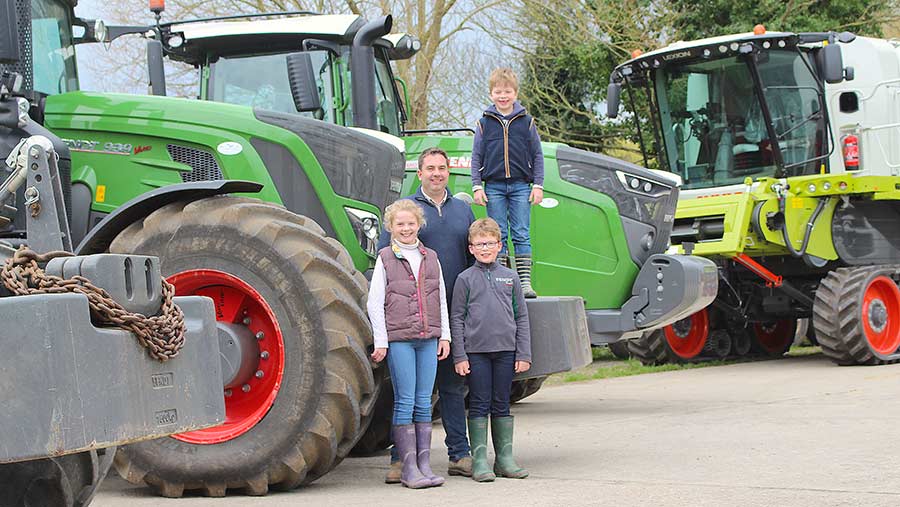 This edition of our shed-peeking series sees us head to a 2,000ha farming enterprise just north of Dover to speak to Matt Solley, winner of FW’s Farm Manager of the Year award back in 2008.

Since winning, Mr Solley has returned home to run the family farm.

In the subsequent 10 years he has doubled his acreage and taken on extra contracting work to build a profitable business based on attention to detail and hard work, with a machinery shed to match.

See also: See all of our What’s in Your Shed? series 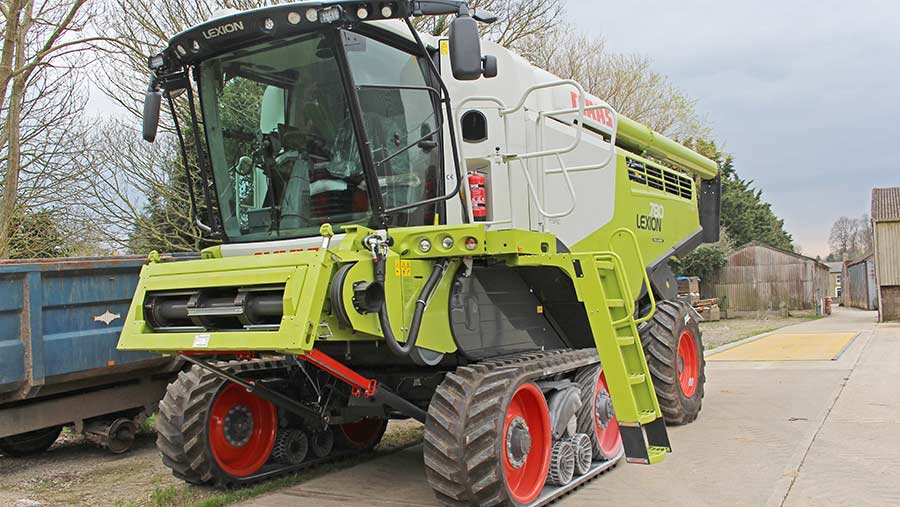 We are very loyal to Fendt tractors, but the farm ran Case machines before I came home.

We’ve had Fendts for nearly a decade and I’m convinced they are the best machines on the market. We also like JCB loaders and Claas combines.

Do you have a favourite dealer?

Crawfords looks after us very well. I knew Wes Crawford from my time working in Essex and that relationship was strengthened when he opened a depot in Kent.

The support and service we get from them is brilliant and they will come out straight away to fix breakdowns.

A mention also goes to Agwoods, our JCB dealer, and Manns for the combines. We use RTK Farming for all our GPS needs – these guys are so valuable nowadays. 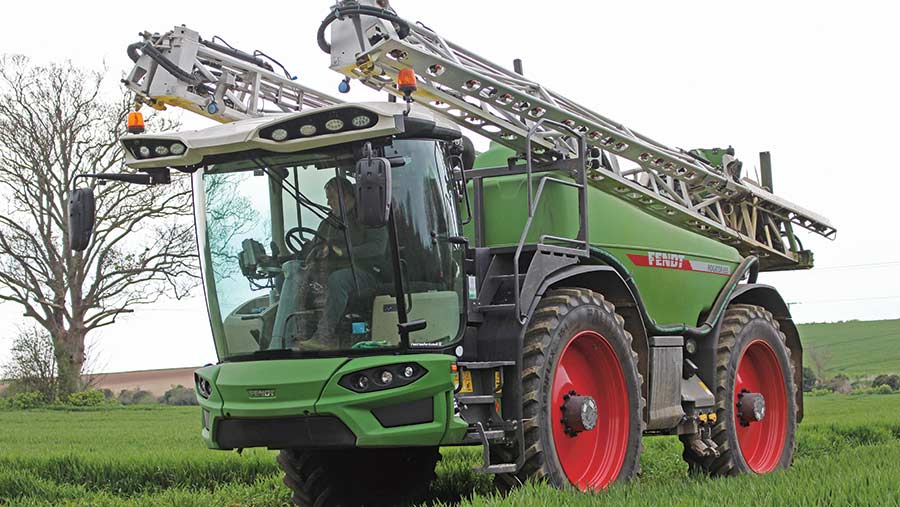 Our Fendt Rogator 655 self-propelled sprayer is a pleasure to use and a huge leap forward from the older Challenger model it replaced.

We put about 1,000 hours on it every year as it does some liquid fertilising.

It is packed full of technology, including single-nozzle shut-off and excellent boom levelling, and the Katana forager cab is equivalent to any combine on the market.

However, the guys that work for me are more invaluable than any piece of kit – the farm runs itself some days and it’s the dedicated employees here that make it happen.

It has to be the continuous flow grain dryer that always goes wrong minutes after we walk away from it.

It’s a Law Dennis and keeping it running is tedious – I’m much more at home in the seat of a machine. 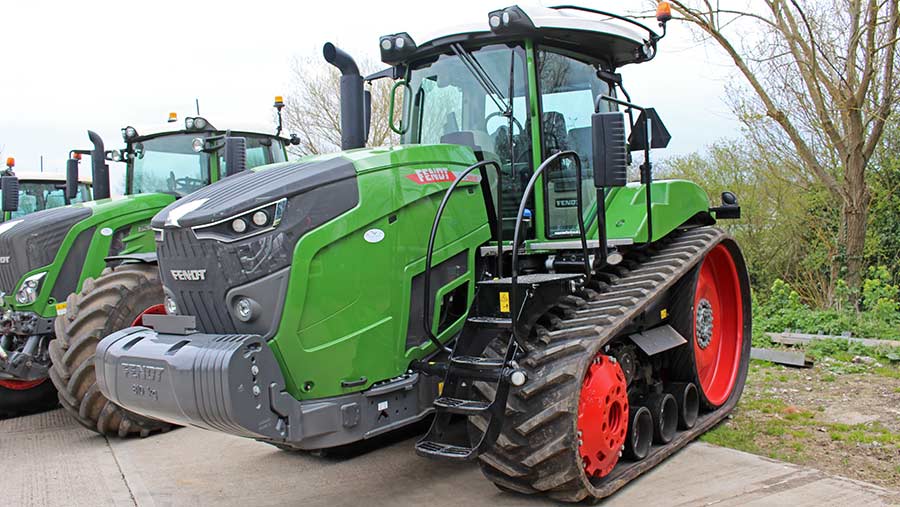 A Fendt 943MT tracked machine that has replaced a troublesome Challenger 775E that we had for three years.

We demoed the MT last summer and it was noticeable how smooth and quiet it was compared with the Challenger.

It’s also nice to have the Vario box, which makes all our tractors familiar to everyone and should save fuel in comparison to the powershift.

Oldest machine in the fleet?

Our 2013 Massey Ferguson 7616 that I bought from a farm sale in Chelmsford. It’s perfect for around the yard, goes on the hedgecutter at harvest and also pulls a grain trailer when we are short.

We used to hire an extra tractor in but when I did the sums, we were better off buying a cheaper second-hand one that still had a warranty.

We take a measured approach that is all dependent on circumstances. It’s usually around four or five years but in the past 18 months we have changed a few more front-line pieces kit.

I’ve been holding off buying some new trailers as I want to make sure we are operating inside the weight limits.

We have two Stewart 16-tonners at the moment, but I would ideally like to go bigger and cut a tractor out at harvest to help with the longer hauls.

A few years ago, I’d folded up the sprayer and left the field en route back to the yard when I pulled over to let a car under a bridge that I swore we’d been under numerous times with the sprayer.

As I eased the stick forward to pull away again the booms hit the bridge and bought me to a stop.

I was so thankful for having to pull over for a car, otherwise I would have been trundling along at 40kph and it would have written the machine off.

Luckily, damage was minimal, and I was back spraying the next day after a visit from the service chaps.

We had a 2013 Challenger M765C that was parked up in a shed over the Christmas break and when we came back to work in the new year, we found it wouldn’t steer in either direction.

Crawford took it back to the dealership to strip it down and ended up taking both tracks off and the engine out to find the problem, which was a family of rats that had moved in over Christmas and chewed through the main wiring loom.

Every farm has rats, but we didn’t realise the amount of damage they could cause to machinery.

They were so at home that not even the lorry journey dislodged them and one scampered out on arrival at Crawford’s workshop.

We bought an old lorry chassis and stripped it back to the bones and mounted a 10,000-litre stainless tank to be a mixer bowser for the sprayer.

We even welded the baffle up in the middle so we could carry two different liquids that are ejected via two pumps. These days it mainly helps out on liquid fertiliser jobs.

One of the most dangerous jobs on the farm is changing the wheels on the sprayer, but having our Spaldings wheel changer has made it so much safer. I wouldn’t dream of doing the job without it now.

Occasionally, like the MF 7616, but it’s mainly new or ex-demo as we like to be covered by warranty on our front-line kit.

Office work, although my sister, Emma Baker, deals with most of the admin and allows me to spend more time outside. 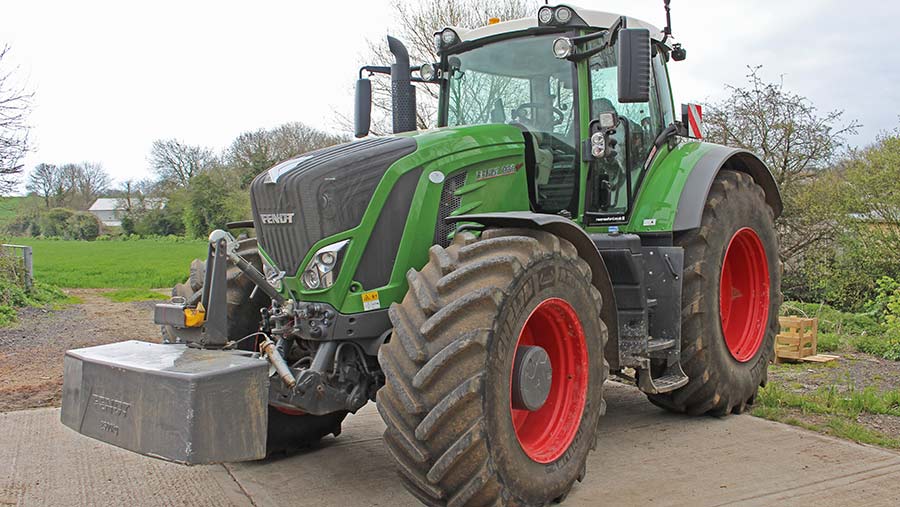 Our current Fendt 939 has been a revelation – particularly the VarioGrip option that changes tyre pressures from the cab.

We previously ran two Challenger crawlers but these were pretty inflexible with anything other than cultivations or drilling.

Sitting in the 939 is the same as any other Fendt, and it can run the Krone baler in the summer and also do a bit of fertiliser spreading, too.

It does all the drilling and we like it so much that I even toyed with buying another wheeled Fendt before opting for the MT this year.

I inherited a Case MXM140 from the mid 2000s when I started and it was one of those Friday afternoon tractors.

Everything that could go wrong went wrong, with the gearbox being the worst culprit. I wasn’t sad to see it leave.

A 2.4-litre Toyota Hilux Invincible, which replaced a 3-litre Hilux.

I helped set up and run a joint venture operation in Essex before I came back home, and in the early stages I was trusted to go and buy a combine at an auction in Lincolnshire.

I was only 18 at the time and took our combine fitter, Peter Bassett, along to see a Claas Lexion Evolution 480 that had only done one season’s work.

I ended up winning the machine for £97,000, with a round of applause as the hammer fell.

Apart from being a moment I’ll remember forever, we ran the combine for three years and never laid a spanner on it – it was a great machine.