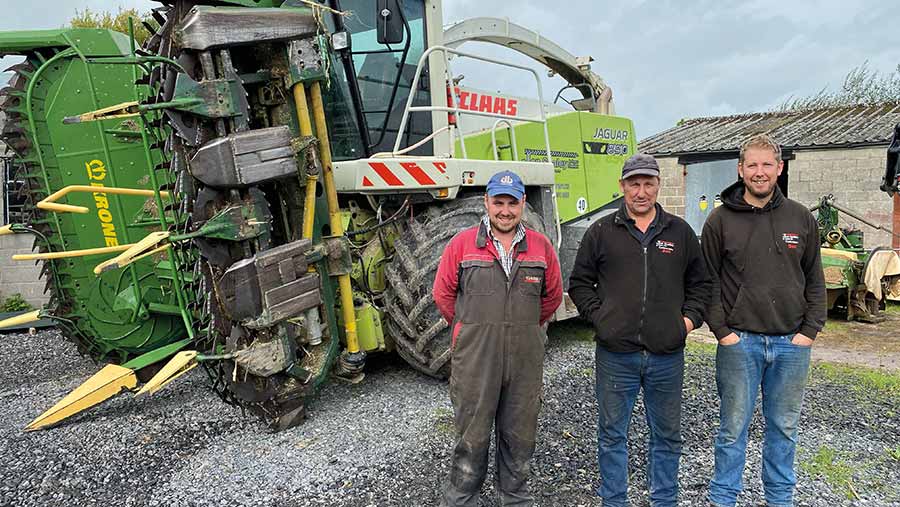 They take us through favourite kit, worst kit, biggest bargains and more.

Jon: My brother took on the family dairy farm, so I ended up starting my own contracting business with a David Brown 1690 and a hedgecutter.

For 23 years I trimmed the verges across north Somerset, but towards the end I found the roads were too busy, the public was too impatient, and I’d had enough of the job.

Instead, I bought a Strautmann forage wagon, and it coincided with my sons Ben and Michael getting involved with the business.

We picked up the best part of 2,000 acres of silage contracting almost immediately, but customers started asking about having a self-propelled in for first cut, so we bought the Claas Jaguar 880 and, after that, the 890 Jag.

The forage wagon still covers about 400 acres a year and comes in handy for awkward little corners of fields. We also use it as a silage trailer.

We know what we like – Fendt tractors, Claas foragers, Krone grass kit and McConnel hedgecutters.

We got into Fendts in the early 2000s with a Tool Carrier, and then a brand-new 415, 515 and 716. However, tractors were sensibly priced in those days – we’re still charging the same sort of money, but new machinery values have doubled, which is why we’ve no choice but to go down the second-hand route.

We’ve also tried a few other brands over the years, including a couple of cheap and cheerful Valtra N101s for hedgecutting, which cost less than £30k a piece, and more recently a Claas Arion 650. 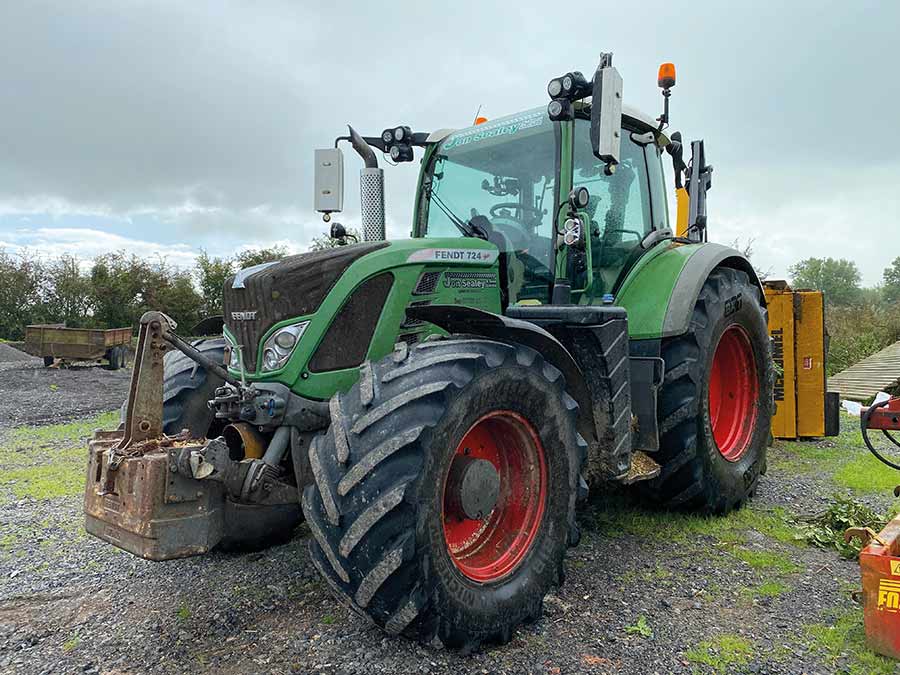 We don’t have a favourite dealer and will go anywhere in the country to find what we’re looking for.

That said, we get great service from Redlynch when it comes to Fendt tractor repairs, and we rely on a few local firms for parts, hydraulic pipes and fabrication jobs.

Will and Jamie from WM Bright are excellent at sorting any parts or problems with the Jags, and Halse South West is our first port of call for new McConnel or Krone machinery.

I wouldn’t say we have a single favourite machine or job, but it’s nice to have everyone out working together when we’re silaging.

We’ve managed to get rid of the worst machines. Top of the list was the Kemper Champion 4500 six-row maize header.

We didn’t know much about them when we bought it from a farm sale for £2,000, but it caused us no end of headaches – it didn’t feed the forager smoothly, kept blocking up and shook most of the cobs off the plants before they went through the forager.

It stayed for one season before we bought the Krone Easy Collect 6000. It looked seriously rough when it arrived – rusty and full of sand – but we gave it a complete overhaul and it has been brilliant since.

Washing machinery at the end of the season – it’s always a chore.

A black Fendt Vario 724, which arrived a couple of months ago to replace a pre-TMS 716.

Almost every one of its 4,500 hours has been clocked hedgetrimming on highways, so the front loader and rear pick-up hitch have only been used a couple of times and it has never seen any muck.

Though we had a look at John Deeres, it would’ve meant having a much physically bigger tractor to match the 724 on horsepower, plus every contractor round here has a Deere and we like to be a bit different.

Six years ago we had a Claas Arion 650, which had a catalogue of problems and turned out to be a nightmare from start to finish.

It was a shame, really, as the independent front suspension, cab suspension and Hexashift transmission made it nice to drive when it was running.

But we had trouble with the steering, brakes and hydraulics, and we didn’t get the dealer support that the problems warranted. 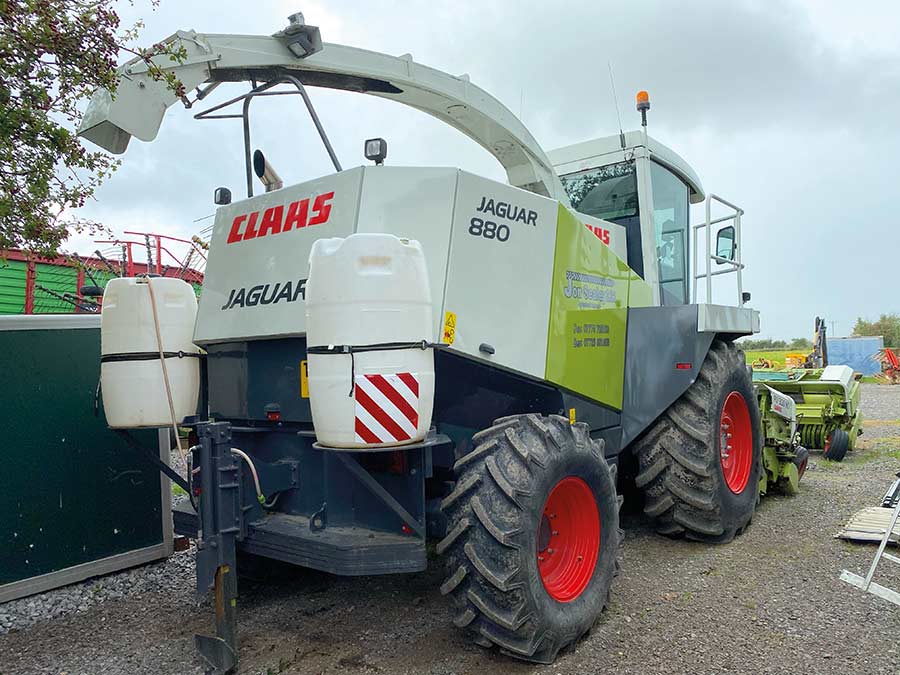 Our T-reg (1999) Claas Jaguar 880. It’s now the pride of our fleet, though that definitely wasn’t the case when it first arrived from south-west Scotland four years ago.

It cost us £18,000 initially, but it was in a sorry state, and we ended up spending another £10,000 on parts and repairs in the first year alone. Will and Jamie from WM Bright rebuilt the transfer box, replaced the liners from the accelerator to the end of the chute and fitted new blades, paddles, bearings and a shear-bar. We’ve also since had it resprayed.

These days it plays back-up to the Jag 890 and only chopped a couple of acres this year – the flap stopped working on the spout and we couldn’t find a fuse, so it was parked up and the 890 finished the job.

The only machines in our yard that we bought new are the two K-Two muckspreaders and four McConnel hedgetrimmers.

We do a lot of hedge and verge cutting – the four machines each clock 1,000 hours annually and run all winter – so we need them to be reliable. The second-hand market is full of bashed-up examples.

The same goes for the muckspreaders. That said, we actually started with a completely rotten 12t K-Two muckspreader, which we picked up from Halse South West for £500.

We ended up replacing the floor, shoulders and door, rebuilt the gearboxes, sandblasted and painted it, then fitted new tips and a set of tyres.

The beauty of operating in the second-hand market is that there are always bargains to be had if you choose wisely.

Generally speaking, we buy them as cheap as possible and work them as long as possible.

In that time, it’s had a recall on the radiator, some new alternator brushes and a few other bits, but the engine, transmission and hydraulics have been pretty much trouble-free.

Ironically, both tractors came from the same contractor in Hereford. 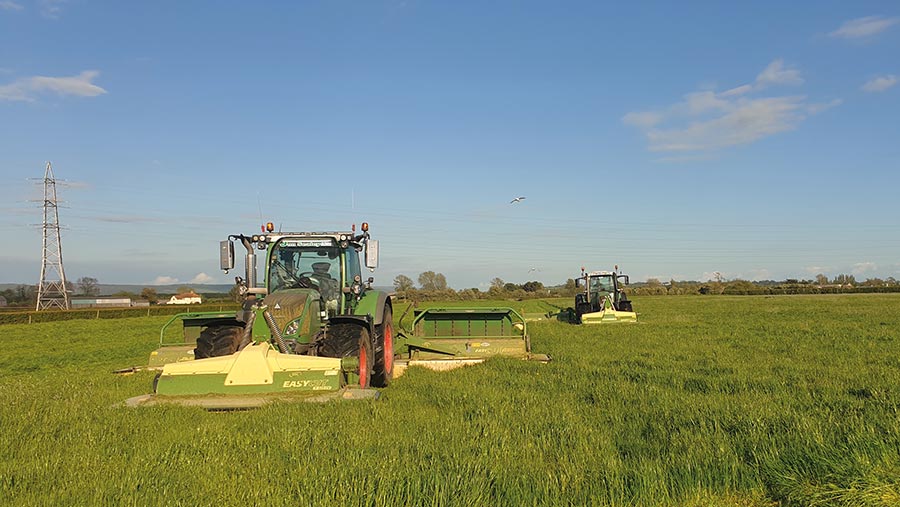 Jon: The one that made the biggest difference was when I put my McConnel hedgecutter on a Fendt Tool Carrier, with the arm mounted on a slew ring at the front.

It meant I could cut to both sides of the tractor and it gave my neck a break, as I was starting to struggle doing 4,500 hours of hedgetrimming every year.

More recently, we made a wire unroller from scaffolding tube for our fencing jobs and mounted an IBC on a trailer to tow a bigger supply of additive behind the forager.

To do this, we moved the additive pump under the hitch, which means we can use the 300-litre on-board tank to chop the headlands of maize fields, then hook on the trailer and switch the pipes to use the 1,000-litre IBC supply on the long runs.

A radio and a smooth concrete floor. We’ve just extended our workshop so that we’ve got a bit more space, as we do all the servicing and most of the repairs ourselves – basically anything that doesn’t require a laptop.

Ben: A new set of 30ft-cut Krone butterfly mowers would be good, as ours are getting a bit ripe.

Though we only bought them a couple of years ago, we’re doing more mowing and we want to do it fast – especially now that we’ve got GPS to keep the tractor running in a straight line. 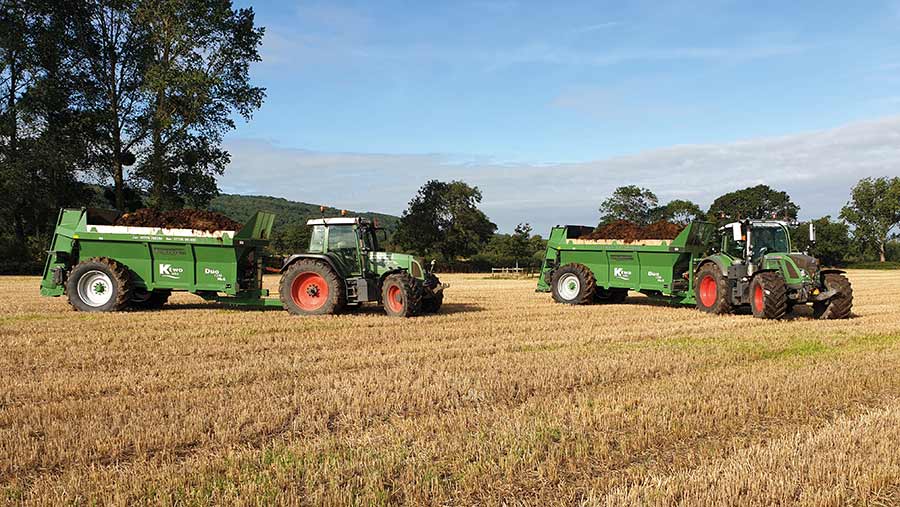 Ben: About 10 years ago, Dad reversed down off the pit and straight into my forage wagon as I was parked waiting to unload.

There was no damage to the trailer, but it smashed the back light and wing of the 716. The local dealer tried to tell us we’d need a new cab but, in the end, we sent it off to the panel beaters and had it resprayed.

Our runaround is a 2014 Isuzu D-Max in Huntsman spec with pull-out drawers in the back. We’ve had it from new and it has now done 76,000 miles.

But last year we had a couple of digger jobs running at the same time, so we had to sort extra transport in a bit of a hurry.

It was cheap – it cost a grand and had a year’s MoT and four new tyres – but is far from perfect.