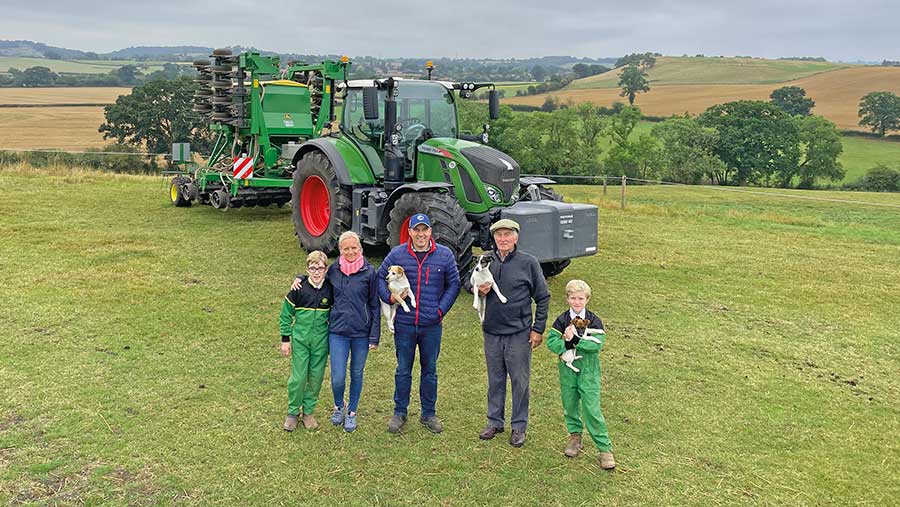 In the next instalment of our popular series, Worcestershire farmer Tom Chugg gives us the lowdown on his multi-brand tractor fleet and selection of arable and grassland machinery.

Not at all. All brands have good and bad machines, and we try to pick the ones that have a solid reputation. At the moment we have Case-IH, John Deere, Fendt and New Holland/Ford tractors, a New Holland combine and a Househam sprayer. The implements are from all sorts of manufacturers, including Kuhn, Sumo, Claydon, Claas, Kockerling and Malone.

Almost all of our machinery is purchased second-hand, so we don’t use main dealers that much. Instead, we have a good local mechanic who helps us with servicing and repairs.

The problem with many tractors of this power is that they’re too unwieldy to use on smaller jobs, but we’ll happily stick the 724 on a fertiliser spreader or tedder and it doesn’t feel like overkill.

It replaced a 2015 720 and the difference in pulling power is huge. The 720 would struggle with some of our bigger kit, but the 724 manages it all easily.

We have been lucky so far and haven’t had a particularly bad tractor. We try our best to buy decent examples, look after them and hope the person that had them before us has done the same.

Often, we’ll be on the hunt for a good second-hand tractor for a few years before a suitable one comes up for sale.

The 1999 Case-IH Quadtrac 9370 is the most powerful, at about 360hp, and it gets used to pull a mole plough and the Sumo LDS subsoiler.

Originally, we bought it to replace a twin-track John Deere 8210T, as we wanted more power in front of our 6m Vaderstad Rapid drill. 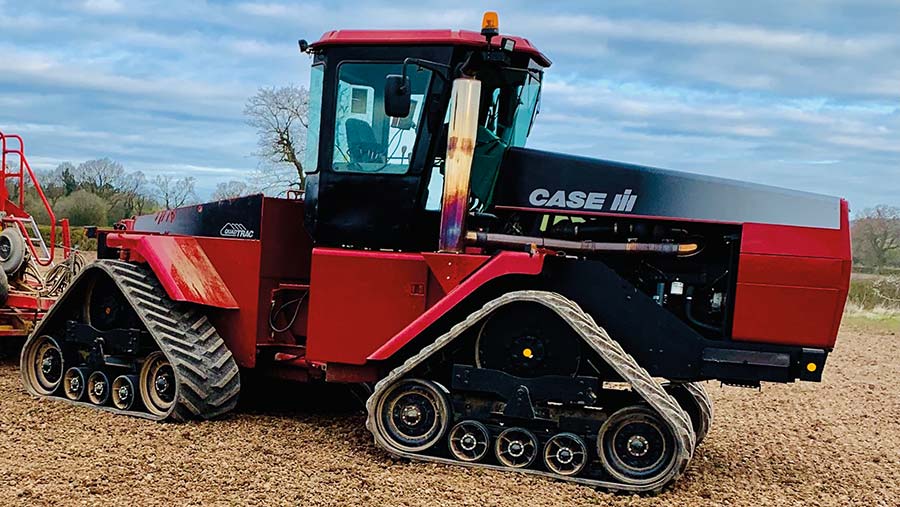 At £22,000 it was cheap horsepower and, so far, we’ve been lucky with breakdowns. The previous owner replaced the gearbox and we take care not to shift it under load.

It now clocks up a maximum of 120 hours a year and there shouldn’t be much depreciation when we come to sell it.

What other tractors do you have? 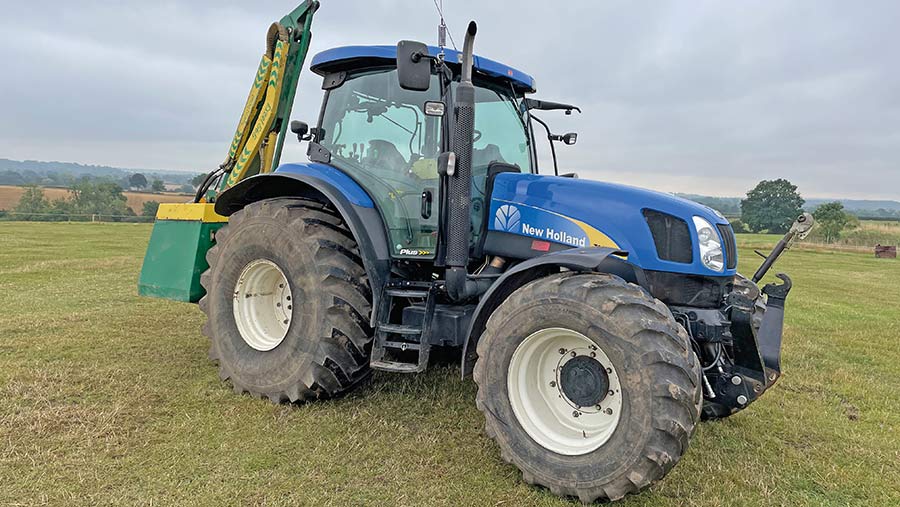 The TSA sits on wide tyres and does all sorts of jobs, from hedgecutting and rolling to running our 6m front and rear mower conditioners, as it is the only tractor we have with a front pto.

It’s quite a big ask for 135hp, though it can boost to 178hp for pto work which helps pull them at 11kph on the flat.

It has been a great tractor and we haven’t had to touch it in the 3,000-plus hours it’s clocked with us.

The 6400 is a relatively recent purchase – we had been looking for a good one for a few years. It was in great mechanical condition, but it had spent much of its life with a hedgecutter and looked a bit rough. 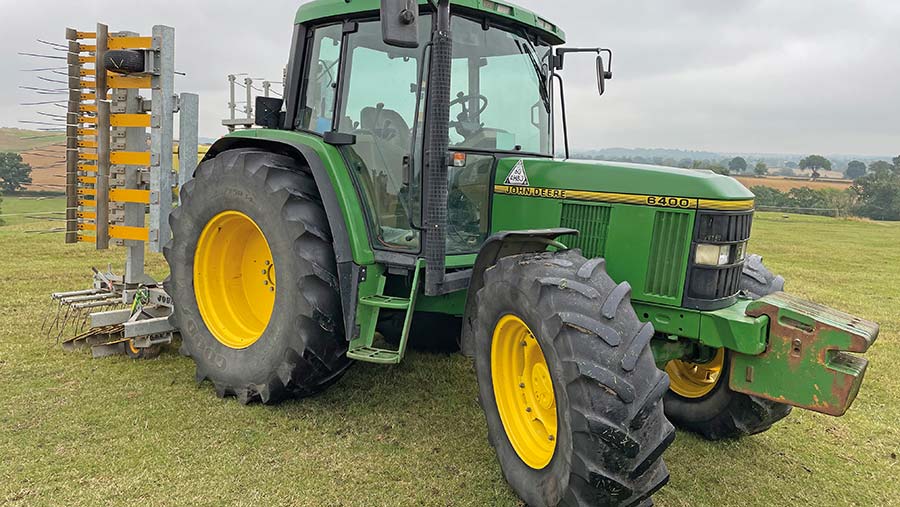 We’re gradually tidying it up and it’s quite smart now. It mainly gets used as a yard tractor, but it also applies most of the Avadex and, when required, will pull one of our 16t Bailey grain trailers.

The first time we used it we only put a single combine tank in the trailer, but it’s so gutsy that we were soon using it to pull full loads.

The John Deere 6m 750A drill. We’re gradually reducing the amount of tillage we carry out, and this machine is versatile enough to operate in a range of situations as we work out how best to do it.

We bought it last year to replace a Vaderstad Rapid and at the same time we swapped our Sumo Trio for an LDS subsoiler and our Carrier for a Kockerling Vario tine cultivator. 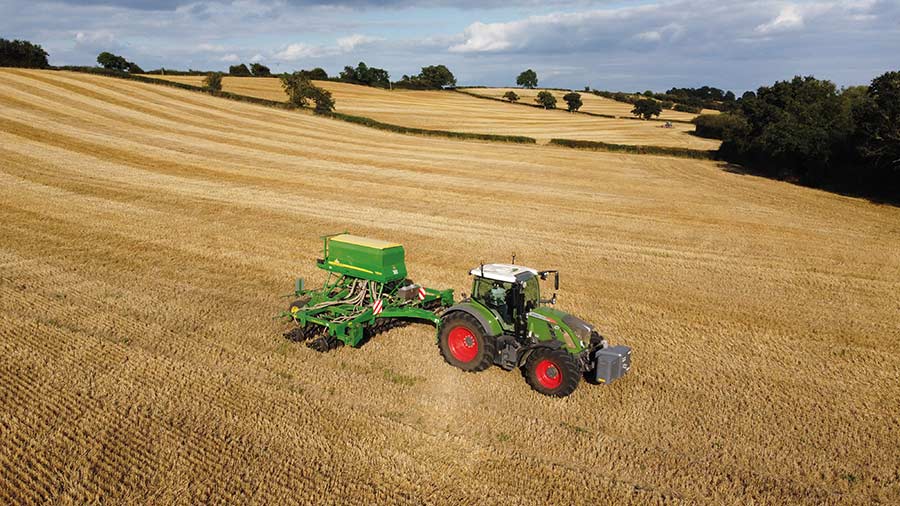 A few brands sent demonstrator drills for us to try, but we settled on the 750A as the seed placement is so accurate.

This is largely down to the fact that the press wheel is on the side of the coulter, rather than being several centimetres behind.

We’ve used in it cultivated ground, cover crops and as a direct drill and it’s worked well in all those circumstances.

The only downsides are that it’s a bit of a fiddle to set up and, because it was a demonstrator model, it didn’t come with markers.

We made our own pre-em markers using a pair of rams and some old Cultipress tines, and we’re looking into making some bout markers as the genuine ones are so expensive.

We do use GPS for drilling, but it would be handy to have them for the headlands and when we need to skirt around obstacles.

I’m not a fan of power-harrows as they’re slow and take lots of fuel to run. However, they do a good job and we’ll probably always have one as a backup.

A 1976 Ford 3000 that was bought new and still gets used for running a drum mower in the summer.

The Sumo LDS low-disturbance subsoiler is one of the most recent, which came in to replace the Trio we had before.

We’re using it ahead of the 750A drill to lift the ground without generating too much tilth, and we plan to pull it through some of the grassland too. 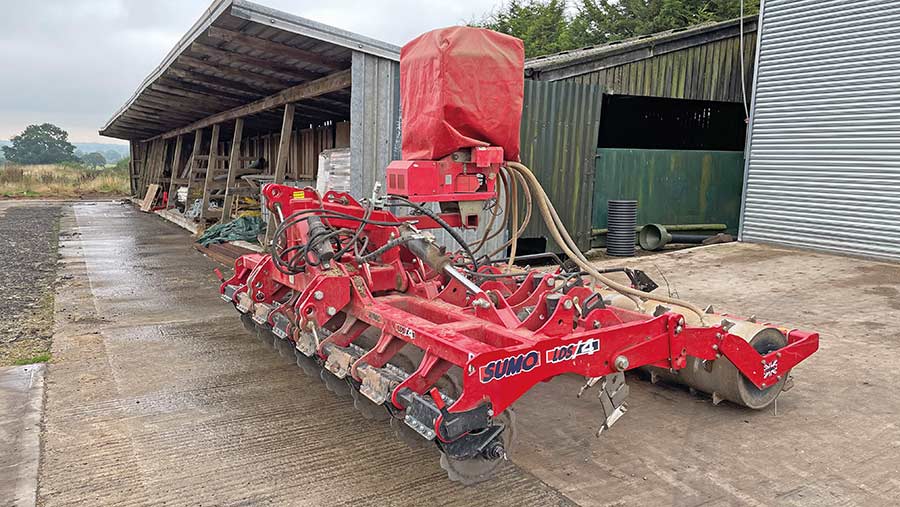 We’ve also used it to establish a portion of the oilseed rape this season with a Stocks seeder unit mounted on the top.

We’re actually doing a bit of a trial, splitting the rape area between the 750A, our 4.8m Claydon V Drill and the LDS – it’ll be interesting to see which turns out best.

It varies depending on how well they perform and whether we find a better example that we want to upgrade to.

Recently, we sold a John Deere 3200 telehander we’d had for 15 years and replaced it with an immaculate 3220. We knew the history of this machine and when it came up for sale, we had to have it.

The only exception is our frontline tractor, which we try to change every five or six years. Because we don’t do that many hours, it doesn’t usually cost us silly money to change.

However, the amount that Fendts have gone up in price means it might, sadly, be too expensive for us to justify another 724 next time. 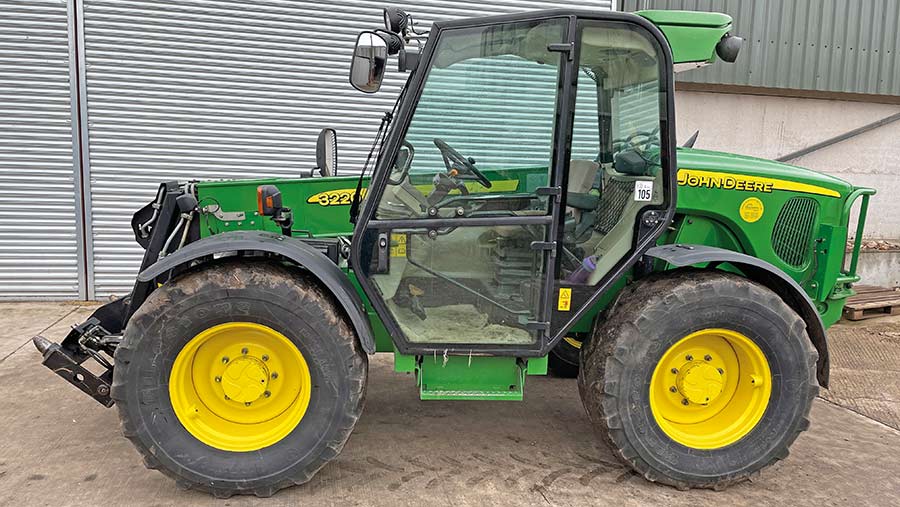 Last year we bought a Mecmar DT20 automatic mobile grain dryer, but we haven’t had the chance to set it up properly yet – we’re still using it with trailers.

The plan is to put it at the end of one of the sheds and have a tipping bay with a trench auger for automatic filling. Once the load is dried, we’ll have the option of discharging straight into the shed or tipping into a trailer.

A few years ago, I managed to tip a 40ft trailer full of straw over at a roundabout on the A46.

It was a load of 80×90 bales, which are notoriously bad for this, and as I was exiting the roundabout I saw the back starting to go in my mirrors.

It made a horrendous mess, but the saving grace was that it happened at about 6am and there wasn’t too much traffic about.

We got it cleared up fairly swiftly and the police were very understanding.

I like drilling, as it gives a sense of hope for next year’s harvest. Drying grain is my least favourite, as it’s unpleasant and needs to be done when everyone is flat out on other jobs.

Hopefully, it will be more pleasant when the dryer is set up to run automatically.

Do you ever buy new machinery?

It’s rare that we can justify buying new machinery, so 90% is second-hand.

I enjoy the process of finding good used equipment and when it works out well, it’s a lot more satisfying than a new purchase from a dealer.

The Kockerling Vario, which we bought from a dealer in Germany for £11,000, including haulage.

We’d been looking for one over here, but there weren’t many to choose from and prices were almost double. It was a bit of a gamble, as we couldn’t go and see it, but it turned out to be a sound choice.

Insulation – we put it in two years ago and it’s transformed the place. We now stay nice and warm in the winter and, as a bonus, cool in the summer.

The roof was backed with Ecotherm foam panels and the sides were clad externally with composite foam-backed tin sheets that came from an old chicken house in Herefordshire.

We had a wet autumn that meant we couldn’t use the Vaderstad Rapid, so we made a power-harrow tine drill.

This involved taking a 4m Accord/Kuhn combi with front hopper, removing the old Suffolk coulters, and grafting in a set of tines from a Concept game cover drill in their place.

We planted most of the farm with it and, although the seed-beds didn’t look that pretty, we had some decent crops. It is a great backup machine to have.

I have a Land Rover Discovery 3 which is a fantastic vehicle… when it’s working. It is lovely to drive and tows trailers brilliantly, but it is forever having niggly electrical problems. I’m not a big pickup fan, so the only vehicle I think I’d swap it for is a VW Touareg.

Any classic tractors or machines?