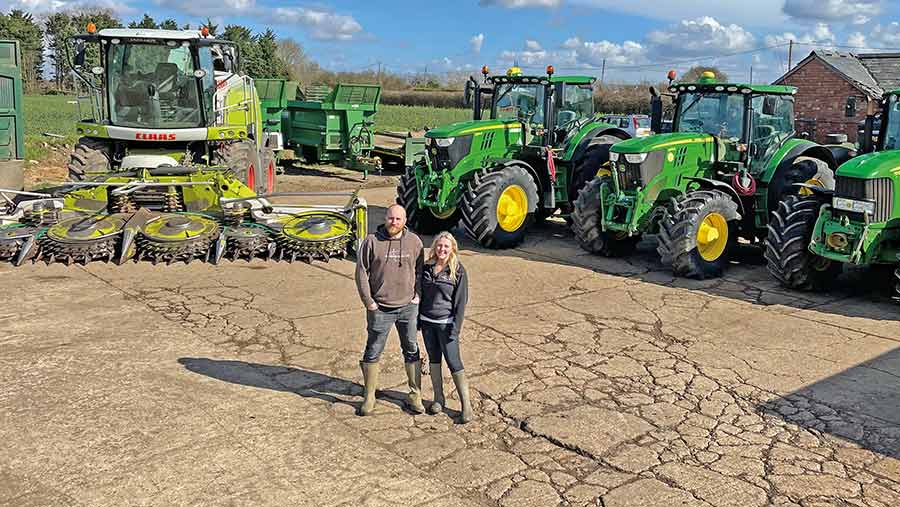 The latest to open their machinery shed doors are Cambridgeshire farmers and contractors Scott and Sarah Haywood.

Up until 2011 we both had separate jobs (Scott was working on a local farm and Sarah was working in the crop protection industry).

Our first move into contracting came when we bought a 16t Agrihire muckspreader to hire out to local farmers.

Demand for this grew steadily and by 2016 we had enough money together to buy a second-hand John Deere 7530, allowing us to start contract spreading.

It was a challenge working this around busy full-time jobs, but we didn’t have enough work or equipment to focus solely on contracting.

Everything changed in 2017, when we were lucky enough to get a tenancy on a 50ha council farm.

This allowed us to give up our jobs, start farming properly and have a good base for growing our contracting business.

Since then, we’ve added to our muckspreading fleet and, in 2020, we took the big leap of buying a second-hand forage harvester to branch out into maize and grass silage.

We’ve also managed to increase the area we farm to 180ha with a couple of farm business tenancies.

The farm and contracting elements complement each other well, and neither would work without the other.

Looking around the yard, you’d think we were loyal John Deere tractor buyers, but that’s not really the case.

The reason we have three of them is that, right now, they seem to offer the best balance of power, reliability, driver comfort and resale value.

The GPS system is also easy to use and simple to move between tractors.

We get these from Tractor Hire UK and specify a 6155R or bigger.

We’ve got on well with all of them, which is why we decided to buy another 6195R this year.

If a brand came along that we liked more, or seemed better value for money, we would consider switching our allegiance. 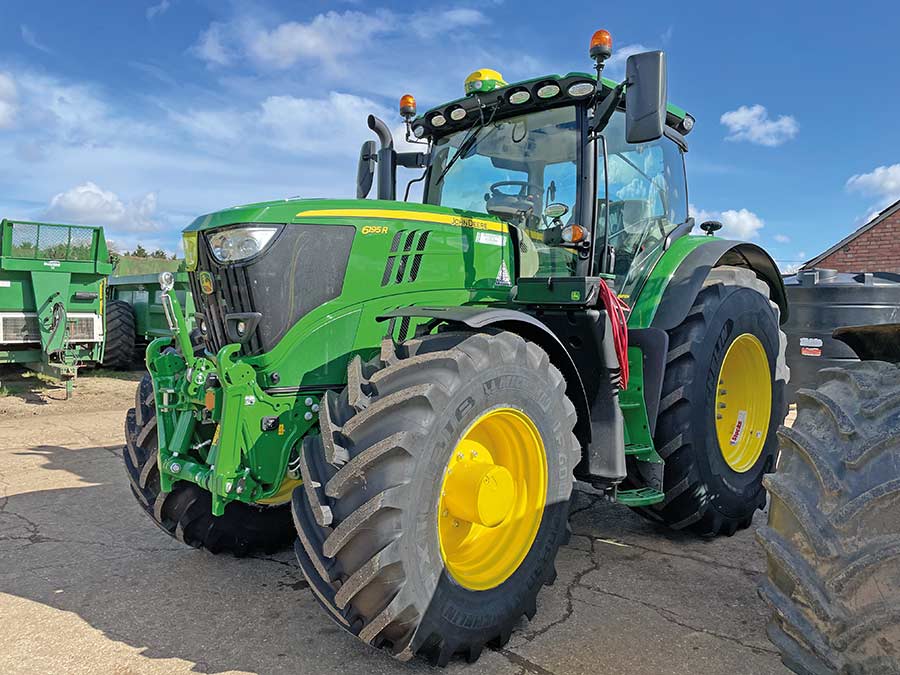 SJB Tractors/Sharmans is great to deal with and we got two of our John Deeres from there before it moved to Case IH.

We did try out a Puma before buying our latest 6195R, but we didn’t like it quite as much and didn’t think it would be any cheaper to own.

Other equipment such as our Bailey trailers and Bunning muckspreaders came from them and we like dealing with the new depot at Eltisley.

For repairs and maintenance, we have three brilliant independent mechanics.

Ben Painter of BP Combines looks after our New Holland TX68, Adam Borrett keeps the Claas Jaguar running, and Adam Burdett sorts out all the other equipment. We do routine servicing ourselves, though.

That’s got to be the second-hand 5m Horsch Joker that we bought to replace a 3m Simba Xpress with ST bar.

We never got on well with the Simba, struggling to get it in the ground when it was dry and finding it blocked up when conditions got wetter.

The sprung discs also tended to ride over clods rather than breaking them up properly.

There isn’t any need to subsoil our ground every year, so we thought the Joker’s twin row of discs and D-packer would do the perfect job.

Plus, with 5m, we can cover the ground so much quicker.

Second-hand models were hard to come by, but we eventually found one with worn-out discs for £28,000. We replaced these, which only cost us about £1,300.

It does a fantastic job, working up a decent 5-10cm-deep seed-bed in a single or twin pass, ready for our 6m Weaving Tine drill.

Our ground varies considerably, from heavy clay loam to sand, and it works well across all of it.

We only subsoil when we feel the ground needs it, which is typically every couple of years.

It was the Simba, but now it’s our Dowdeswell five-furrow plough. It was probably OK once, but it’s a very worn, full vari-width model that makes it impossible to do a tidy job.

As hard as we try, we can’t get it to match up. Now that we’ve got the Joker it doesn’t get used that much, but it is a handy tool to have in reserve.

Most of our arable implements are second-hand, but the ones used for contracting are usually bought new.

Scott has been lucky enough to work on a range of farms and see different ways of managing machinery, from running old, high-hour kit to brand-new equipment that is changed every year or two.

When you’re contracting, the gear needs to be smart and reliable, so it’s not ideal having older machines that run the risk of breaking down. 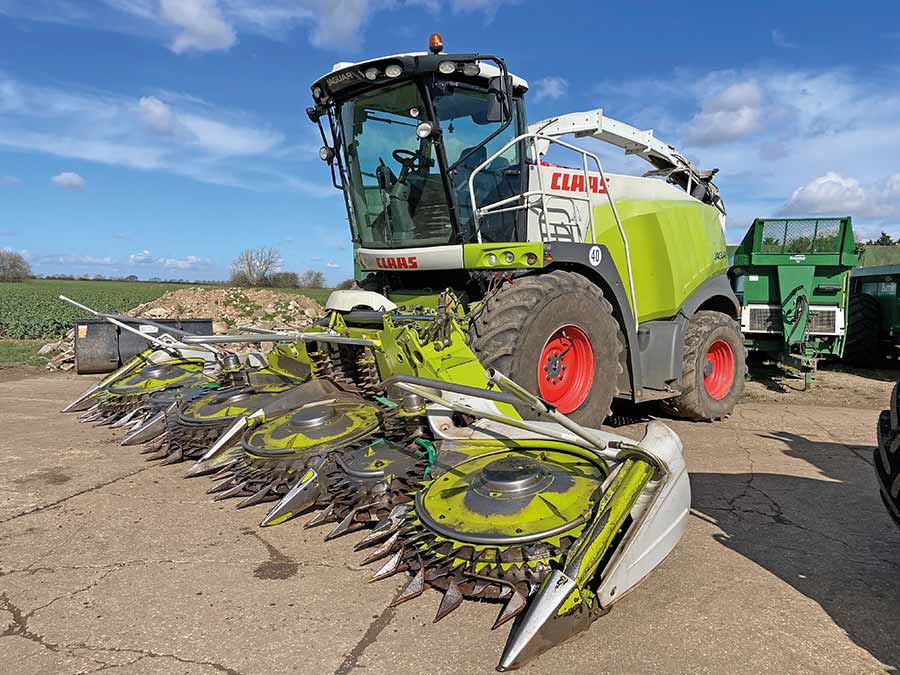 Our 7530 has been a great tractor and is hard to fault. People often ask if we’ve had all the usual 30-series problems, but it’s had nothing serious go wrong.

This could be because it’s one of the later models, on a 2011 plate, which gave them time to sort some of the teething problems.

It’s also autosteer ready, so we were able to buy a second-hand dome and screen to get up and running with guidance relatively cheaply.

We’ve only owned two tractors for any length of time and both have been good.

The 6195R did have a new fuel pump, which landed us with a £3,300 bill, but you’ve got to expect something when you are running second-hand tractors and working them hard.

The most recent is our new Directdrive 6195R, which has only just arrived.

This has the same transmission as our other 6195R and we prefer it to the Autopowr CVT as it puts the power down much more efficiently.

We particularly notice this when we have hire tractors with Autopowr alongside ours when working in tough conditions during maize harvest.

The Directdrive has a more positive feel, grips well and is better suited to the ground conditions. It’s our first new tractor and it cost us £130,000.

Other recent purchases are a pair of 16t Bailey silage trailers and a newer JCB JS130 digger. 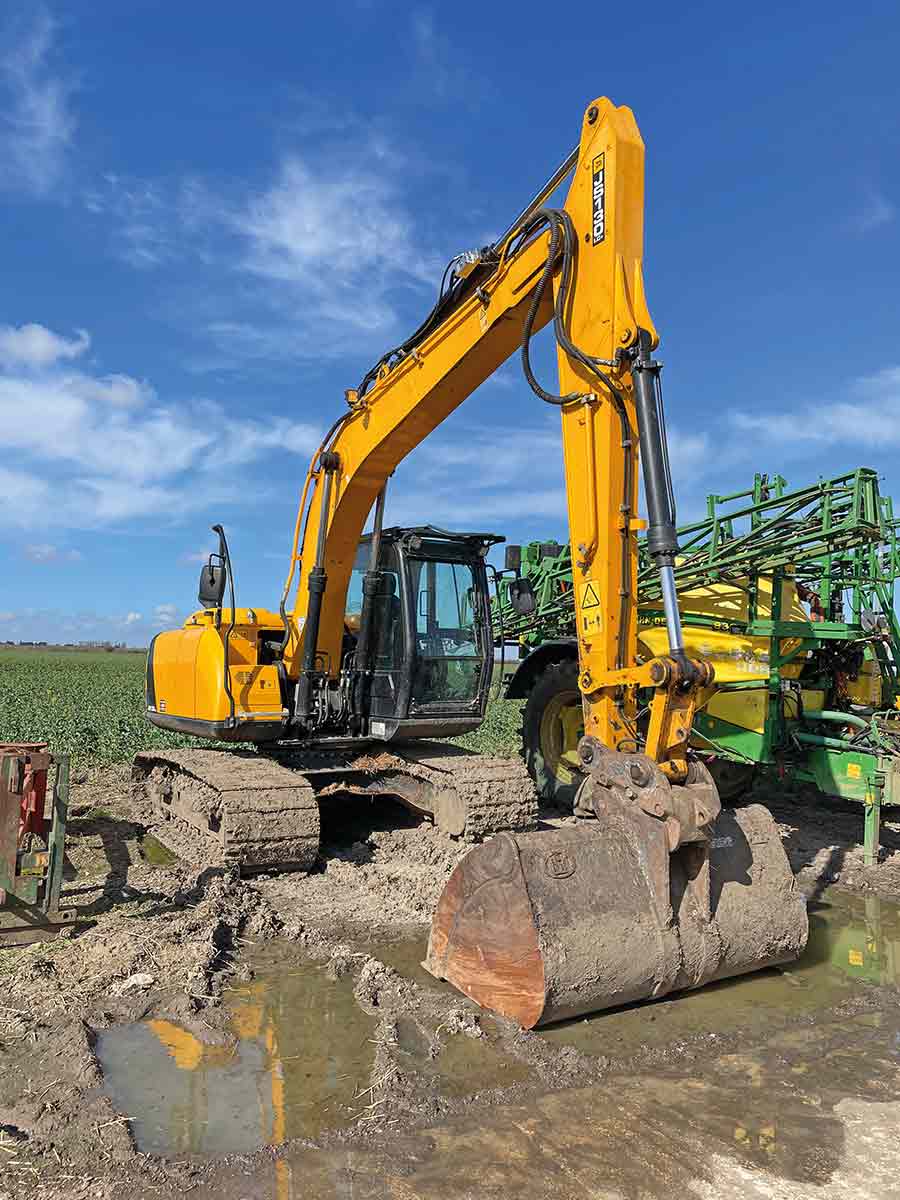 That would be our 1998 New Holland TX68 combine. It might be the oldest machine we’ve got, but it’s also one of the most reliable. We bought it when we moved to the farm and it cost £28,000.

Our mechanic gives it a service before each season and, so far, it’s cut our 180ha of arable ground without any breakdowns.

The air conditioning is the only weak point, but it works just well enough when there’s only one person in the cab.

Ideally, we’ll get to a point where we have a replacement cycle of every three to four years for the major machines.

However, until we get more established, we’re keeping them longer, running them to higher hours and hoping we don’t get too many big repair bills.

They still need to look smart and do a good job, though. 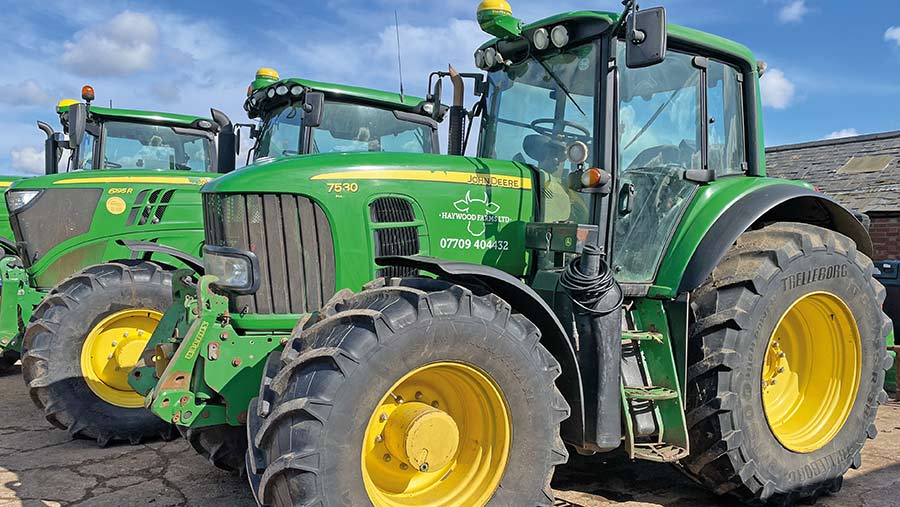 It’s a big list. A bale chaser would be great, so that we can turn bale carting into a quick one-man job, and we’d like to have a newer forager.

The current one isn’t really in keeping with the rest of our contracting kit and we will be looking to replace it after this maize season.

Scott: When I was working in New Zealand, I drove the farm’s Cat loading shovel down the drive a bit too fast, got a wobble on, and jabbed the outer bale spike through a tree.

It went all the way through and wouldn’t come out, so I had to unbolt it and leave it behind.

It’s still there to this day and, for some reason, it’s become a minor tourist attraction. Only recently, we were speaking to someone who had been out there and had gone out of their way to see it.

Anything to do with the forager – that thing is a money pit. Our mechanic, Adam, does help us keep it running as cost-effectively as possible, making sure we do all the important stuff and leaving things that aren’t essential.

The biggest bill was one we thankfully didn’t have to pay. When we bought it, we got Claas to change the chopping cylinder, at great expense, from a 20- to 28-knife unit so that we could chop for both anaerobic digestion and livestock.

Shortly after, the bolts came loose, allowing it to move around and cause all sorts of damage.

The bill would have run to £10,000 or more, but Claas covered it and lent us a demo machine while it was being repaired.

We haven’t got much of a workshop yet, so there is a limit to what you can invent with a sledgehammer and a couple of spanners.

Scott: My favourite is fertiliser spreading, as you’re getting on the crop for the first time after winter and you really feel like spring is on the way.

I’m not a fan of spraying as you’re always waiting around for the right conditions, which seem to come less and less frequently.

Sarah: I like cultivating as I can sit back on the autosteer and relax. It’s a bit of escapism for me.

I hate anything to do with ratchet straps as I just can’t get on with them.

We both love working with livestock, even though we can’t always agree on the best way of doing it. 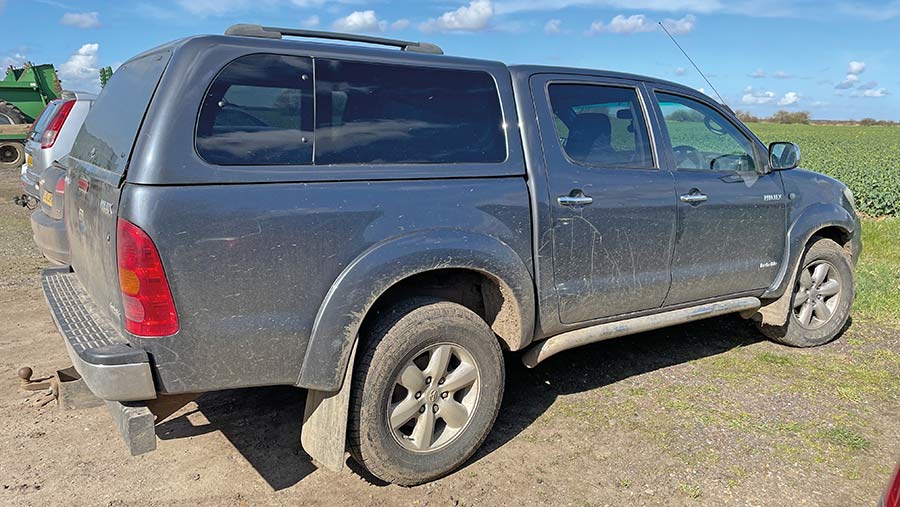 We’re not sure we’ve ever had one. However, our 7530 has cost us very little to run considering how many hours it has done.