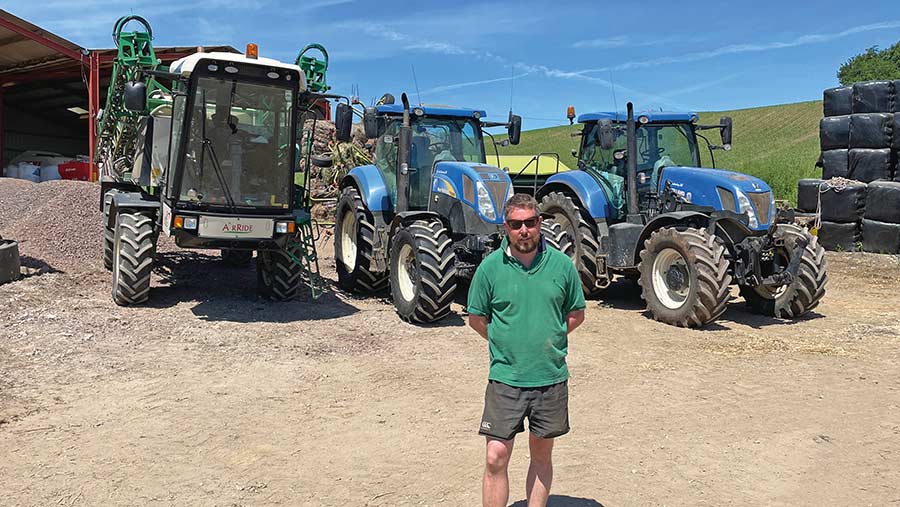 This week, our What’s in Your Shed? series heads to Frome, Somerset to suss out the machinery highs and lows of farmer and contractor Ashley Luke.

I came back to our 30ha family farm in 2005, after working and travelling in New Zealand, and decided to diversify into contracting.

I started out with a Valtra 8150 that I bought new, a hedgecutter and a Tebbe tandem-axle muckspreader. It was a 14-tonner with discs that could spread 24m wide, which was far too big for the work I was doing and the tractor I had to pull it.

I soon traded it in for a smaller 10t ECE that I had until fairly recently. That machine set me up in the muck and slurry game and paved the way for the tankers and umbilical setups. 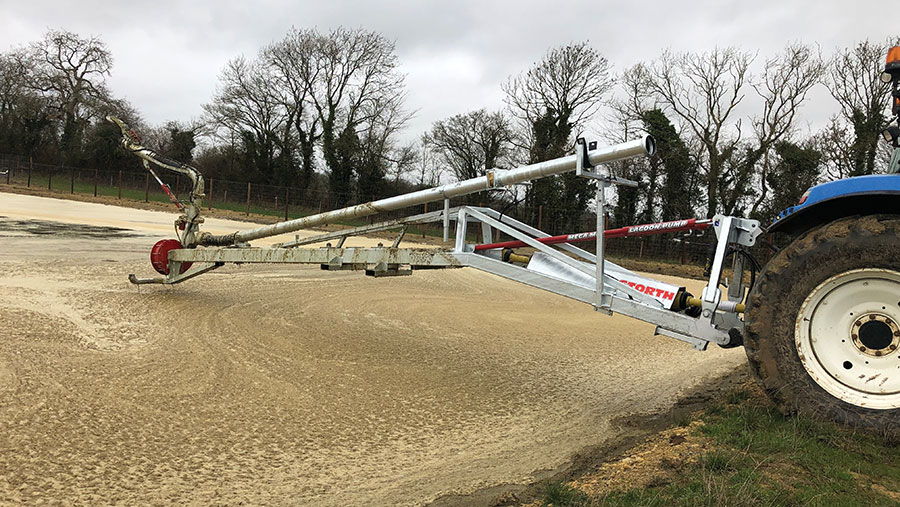 My partner, Chelsea, now helps run the business and we’ve grown it steadily, to the point that we now have a broad fleet of machinery and three permanent staff members. Fast growth is expensive, so we’ve tried to do it more sustainably and only spend where we need to.

Are you brand loyal?

We’re more loyal to dealers than a particular brand, and if they look after us, we’ll look after them. The machines have to be up to the job, though, and the prices have to be right to ensure we can make some money.

Over the years, we’ve had tractors from Valtra, Massey Ferguson, Claas, Fastrac and Case, before settling on the current line-up of four New Hollands. At the moment, Case IH and New Holland seem to make the most financial sense – they’re a reasonable price, fairly reliable and have a good resale value.

We’re lucky to be well served by dealers in this area and there are several we do business with. The tractors come from TH White in Frome, and we like the fact that they offer both Case and New Holland from the same depot. They also look after us well. 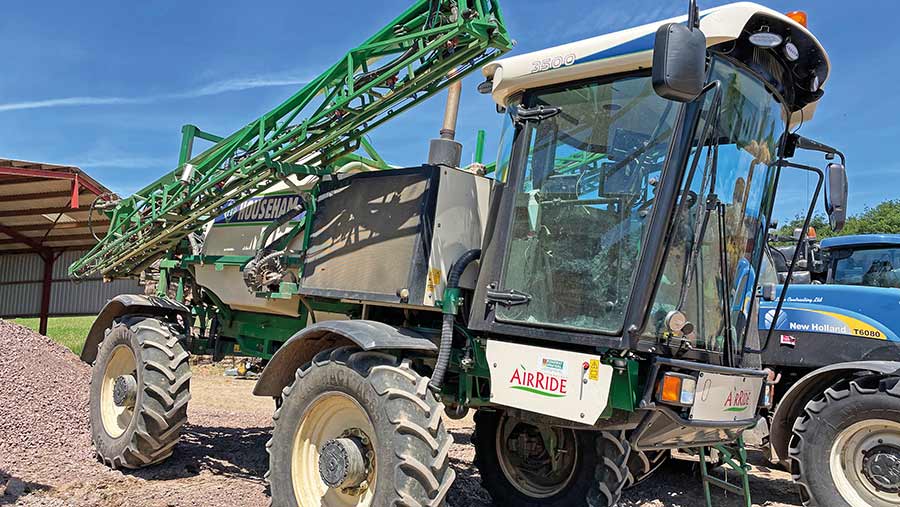 Our New Holland BB9060 four-string baler is my favourite, as it’s so consistent and rarely gives us any trouble.

It’s not the quickest baler in the world, but it makes up for that with the quality of the bales, which are the same every time, regardless of what the swath is like.

We also like that it has an adjustable pre-compression chamber, which allows us to change the size of the wads going into each bale to suit the job in hand. For example, horse customers like small wads that are easy to separate.

The Claas Quadrant 3300 baler. It’s a lovely machine to use, but it can’t match the New Holland for bale quality, and it’s in my bad books as the gearbox blew up last year when it was only on 50,000 bales.

The saving grace was that Claas stepped up to help with the cost of replacement parts, even though I had bought the machine privately.

Spraying is my favourite, as you can cover the ground, see different farms and get to watch the crops going through their growth stages.

I don’t really have a least favourite – I will do all of the jobs we offer during the course of a year and if I didn’t enjoy one, I’d probably stop offering it. I wouldn’t expect the guys who work for me to do a job I wouldn’t be willing to do myself.

In fact, we’ve just bought a new set of tyres for it. Our dealer believes it’s going to become a modern classic.

We never change tractors at set hours, but we try to work out when is the most economical time to move them on.

I made a slight error with some of the Valtras I had in the early days and I was tempted into changing them too soon, which meant I hadn’t built up enough equity – I might as well have leased them. Other machinery is changed when it’s worn out, no longer up to the job or there is another, more economical, option.

We buy a mix of new and used machinery, depending on the deals that are around and how much money there is in the job they’re going to do.

Two of our tractors were purchased new, one was an ex-demonstrator and the other was the T6080 that had done quite a bit of work.

We’ll also modify and make pieces of machinery if there is nothing suitable on the market, or if the machine we want is too expensive to justify.

We had a Case Puma 155 that came from TH White in Frome in 2012, which is the best tractor we’ve ever owned.

It was an ex-hire model with 250 hours on the clock that cost us about £56,000, including front links and a set of loader brackets.

We fitted a Quicke Q75 loader that we already had and it got used for all sorts of jobs, racking up a total of 10,300 hours in five years.

We had very few problems with it, apart from a crank seal that was replaced under warranty, an internal rocker cover filter and a few front hubs that broke up due to the amount of loader work it was doing.

Most of those were replaced under warranty. It was sold for £25,000, making it one of our cheaper tractors to own.

A 2009 Claas Arion 640 that had a catalogue of problems, including failed injectors, turbos, both rear trumpets and multiple sets of brakes.

It was a 50kph model, but only had braking on the rear axle, so they used to wear prematurely. The plus side was that it was really nice to drive.

I’m a big fan of gunmetal grey, so when we bought the 210 I enquired about having it wrapped or painted. We couldn’t find anyone that was willing to wrap it, but there were a couple of spray painters that were happy to do it – it cost about £1,500.

It’s a good talking point, but I’m not sure if I’d do it again as the paint chips off the plastic panels a bit too easily.

I was muckspreading at night and had a small amount left at the end of a load. I decided to use it up by reversing back up the run, but I hit a pole holding a three-phase power line, causing the wires to arc out, snap and hit the ground.

Thankfully, the power company came out and fixed it and I didn’t get a bill – there’s a bit of a lean on the pole to this day.

We’re looking at getting a fifth tractor, as we find ourselves a bit short at busy times of year.

The fact that we’ve had to invest in a few other pieces of machinery this year means it may need to be a second-hand model. However, if there is a good deal to be had and we can justify it, we might buy new.

The gearbox for the Quadrant 3300 baler. Even though Claas helped out with the cost, the bill still ran to five figures.

A few new machines have arrived in quick succession, including a Storth Megamix for stirring lagoons and top-filling the tankers, a Kuhn twin-rotor rake and a remote slurry-pumping trailer.

This has a Tramspread engine-and-pump skid unit and a compressor mounted on a Merrick Loggin plant trailer.

Apart from jobs where we need to double-pump, it’s made umbilical spreading a one-man and one-tractor job. 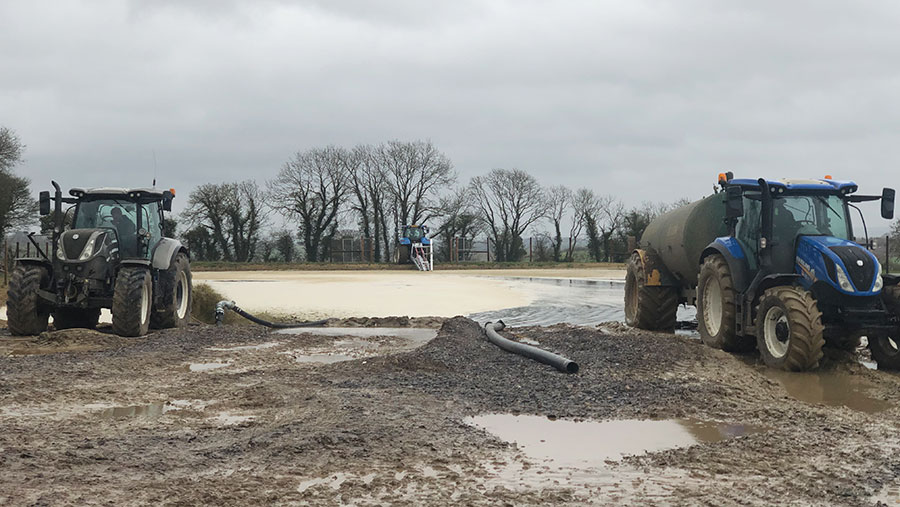 However, the newest purchase is a McHale 988 high-speed square-bale wrapper that we got to replace a Tanco machine.

The Tanco could be tricky to use and a customer wasn’t happy with the job it was doing, so we needed to upgrade. It was a big investment for a wrapper, but the quality is better and it’s doubled our capacity from 50 to 100 bales/hour.

A nurse tank that we made from a new 50-yard roll-on, roll-off skip. It holds 38cu m of slurry – enough for three tanker loads – and allows us to do umbilical spreading at remote sites.

We looked into buying one, but at £20,000-plus there was no way it would pay us back. When it’s finished, our version will have cost just £7,000, so it’s far more affordable. 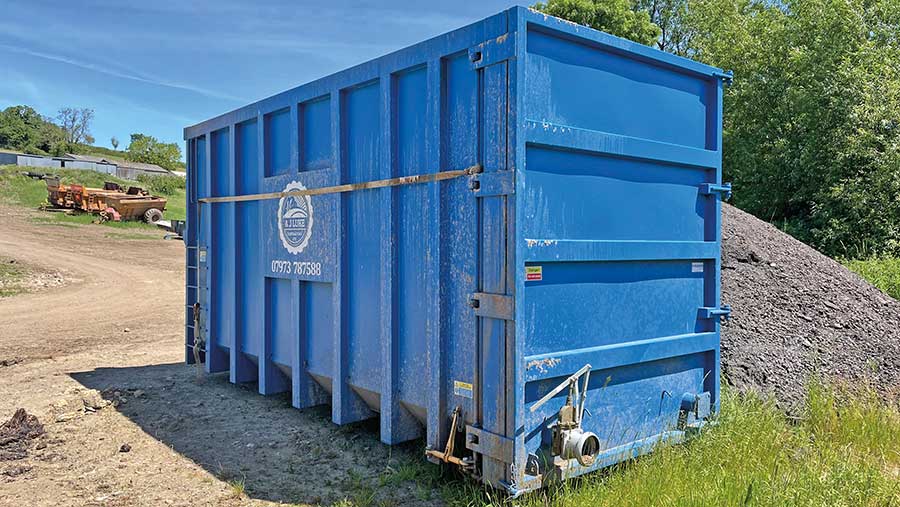 The skip manufacturer added twin outlets for us to hook the pump onto and we fitted our own filler pipe with a flexible hose that makes it easy to connect onto the tanker. We thought we might need to recirculate the slurry, but there’s enough of a head for the pump to self-prime.

At the moment we get someone to move it for us with a hook-lift trailer, but we plan to fit a raise-and-lower rear axle and a drawbar.

A few years ago we bought a Migatronic arc/mig welder and it has been fantastic. It’s small enough to stick under your arm and powerful enough for joining large pieces of metal together.

You probably couldn’t weld with it all day, but it does everything we need it to.

I have a 2015 Nissan Navara that’s on 130,000 miles and hasn’t had any major work other than a clutch. It’s nice to drive and, fortunately, the chassis still seems to be in good shape.