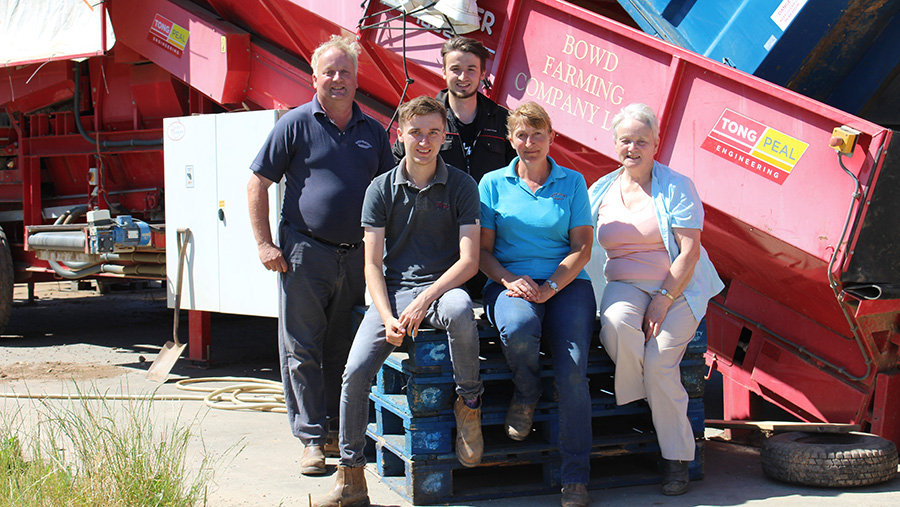 Our What’s in Your Shed series heads to a 240ha farm bordering the Lincolnshire Wash for a chat about the particulars of Dean Bowd’s machinery list and why he has an unwavering love for one particular brand.

We visited the family as they had just started to lift and grade daffodil bulbs, where they revealed a problematic tractor in the fleet that is due for the chop this year and what may replace it.

We also get the lowdown on why Mr Bowd has some rather unwanted competition for the job of combine driver.

Massey Ferguson through and through, and have been since the early Massey TVO was introduced in the late 1940s.

I’m the third generation Bowd and, since my grandfather rented the farm from Lincolnshire Council in 1942, red has been the only colour of tractor – even our ride-on lawnmower is an MF. 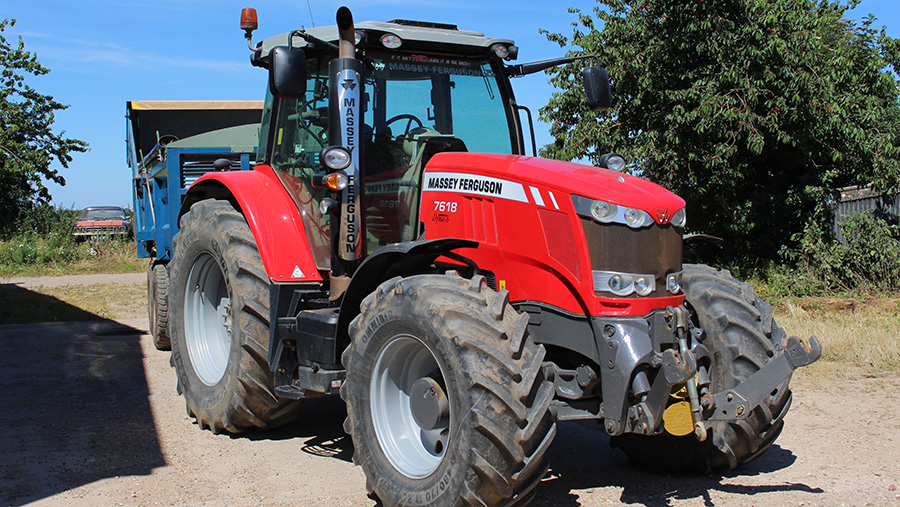 Our local dealer is Chandlers, which supplies all of our Massey kit plus most of our cultivation machines.

It was formally Boston Tractors and sold machinery to my grandfather, so the guys have got to know us all well over the years and tend to give me some stick when I go in there.

The only other dealer we use is David Harrison Handling for our potato bagging equipment.

Our brace of MF 6480s are particular stand-out tractors – everyone loves to drive them and they are bomb-proof. I’m not quite sure what we will do when they come up for replacement as I reckon MF made an error when it stopped building them.

That’s an easy one – the 2013 Massey Ferguson 7618. It’s been a complete nightmare ever since it rolled off the delivery truck (more on this later).

A Miedema potato belt planter. The in-cab computer has taken a bit of getting used to, but it’s a lovely machine.

We used to lift all our own sugar beet but in recent years have used a contractor.

We’ve now switched back to lifting again after I bought a Garford V6 Hydro trailed harvester, which I aquired for a very decent price and it’s a fantastic piece of machinery.

The Massey Ferguson 135, which starts on the button every time. The clock stopped working years ago, so who knows how many hours it has clocked up.

It’s now used for rowing up daffodil stalks so they don’t get hoovered up by the harvester, as well as a few other light duties. 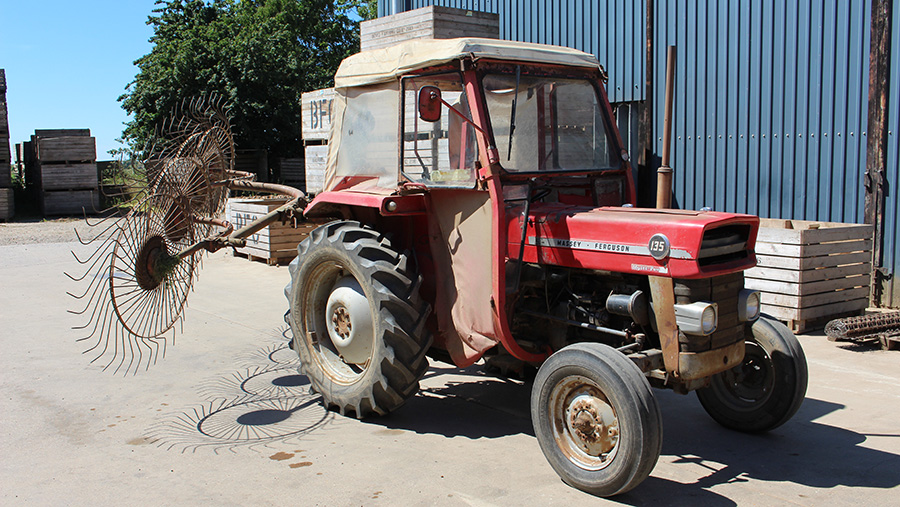 We don’t really have one. Our biggest factor is potato prices – if we have a good year then we’ll reinvest in some new machinery.

We aren’t scared of running things outside of a warranty period as long as the machine has been fairly trouble-free.

As it’s only us that does the driving, we look after them well and my sons have added chrome exhaust stacks and MF stickers to a few of them, although these modifications are pretty lost on me. 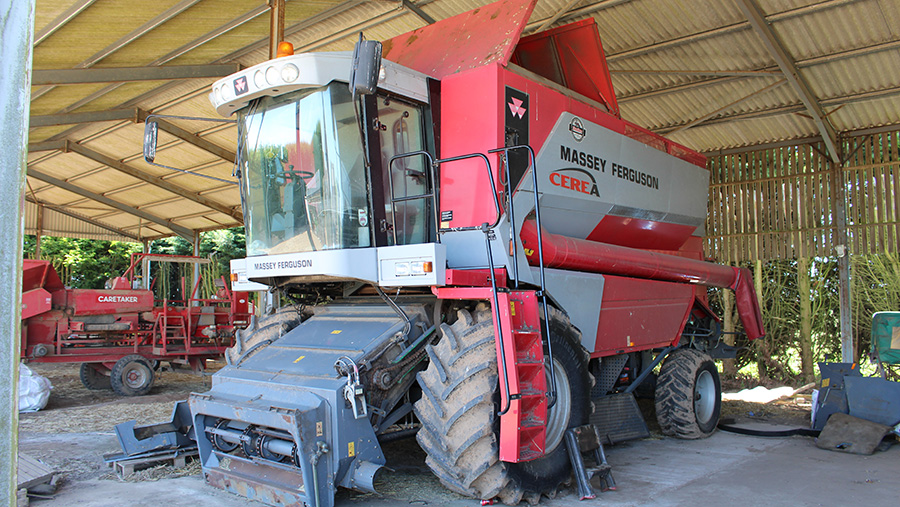 We were combining wheat a few years ago and had stopped for some in-field tea. I was in a hurry and jumped back in the seat to carry on, but after a couple more bouts our harvest student was frantically flagging me down as there were flames coming from the MF 321’s engine bay.

I had enough time to grab my phone and the toolbox before a couple of colourful explosions, the second one being blue as the hydraulic tank exploded and the header fell to the ground.

Luckily, we didn’t lose any crop as we were harvesting a couple of minutes from the fire station and they sent three units to put it out.

It was a complete write-off, and the damage was so bad the insurance company couldn’t determine the cause.

Chandlers was brilliant and hired us a Massey 7278 to finish harvest, which I liked so much I bought, although unfortunately the insurance didn’t pay old for new.

Where to start? It was one of the early models off the production line and we are now on warranty claim 46 since it arrived new in 2013. The first claim went in on day three of ownership, which was a faulty AdBlue system.

Some have been small such as work lights blowing fuses, others have been rather large and expensive, and the most spectacular was the PTO clutch welding itself together.

When the engineers took it out, which was a sizable job in itself, it had turned a shade of blue due to the heat and they couldn’t get it apart. I bought it to power the potato harvester but we deemed it too unreliable for the job.

We took out extended warranty due to the issues we had with the tractor, which proved to be a sound decision. We now also have to keep a selection of 7.5amp fuses in the cab as they blow on such a regular basis.

It’s frustrating as, when the tractor is running well, it’s a lovely machine to drive and there are other 7618s in the area that have been near-faultless.

It ran out of warranty in March and we are going to chop it in later this year, but the issues haven’t tempted me to switch brand.

My father only had one new tractor in his career, which was the MF 6150 we still own. I have always tended to buy new as I like to know where I am with warranties and reliability.

We would probably only buy second-hand in an emergency and it would have to be the right machine.

With the varied workload, we need three reliable front-line tractors, so a replacement for the troublesome 7618 is top of the agenda.

We had a demo of a 200hp MF 6718 four-cylinder earlier this year and it made light work of our five-furrow Dowdswell plough and could easily cope with more.

My eldest son James is very friendly with the local Lemken dealer and keeps badgering me for a new plough and drill, but he still hasn’t told me how he is planning to pay for them yet.

Our Team trailed sprayer could also do with an upgrade, so we’ll see how well the potatoes sell. 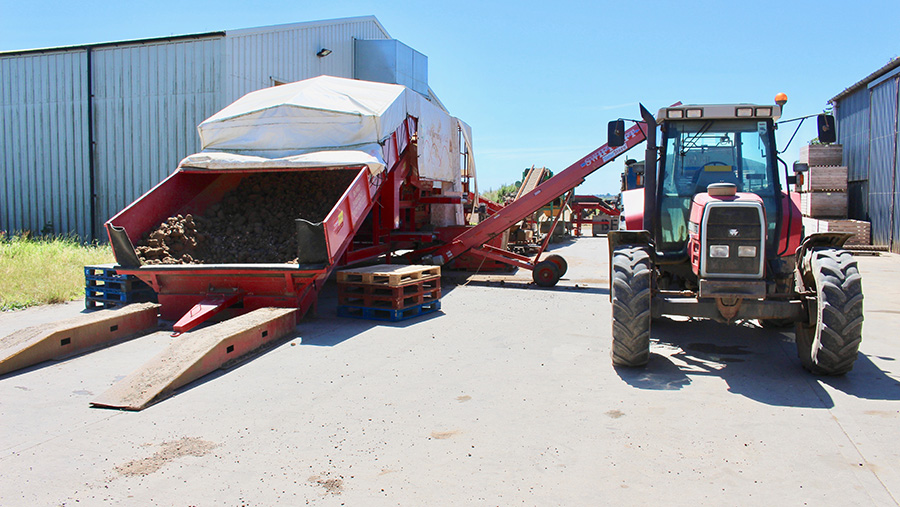 I’m addicted to farming and don’t really have a favourite job as I like everything we do.

However, with James now 21 years old I’d better say combining, as he will be more than happy to kick me out of that seat if I’m not careful.

Has to be the Garford beet harvester, although I’m not sure Phillip Garford would thank me for the business.

The oldest machine we own is a 1965 MF 35, which was bought new by my grandfather and I bought it from his retirement sale. It is now in charge of equestrian duties and in the care of my wife, Debbie.