In the latest from our series that takes a look behind the doors of the nation’s machinery sheds we visit Aberdeenshire farmer Iain Chapman.

Find out what’s the best tractor – and the worst – he’s ever owned, what gems he’s got hiding out behind the shed doors and an embarrassing and machinery-related mistake that left him with a hefty bill.

We’re not loyal to any brands and we have four different makes of tractor on the fleet. A few years ago we switched to Fendt, but the latest purchase was a John Deere as we were offered a much better deal. The Fendts are probably better tractors, though. 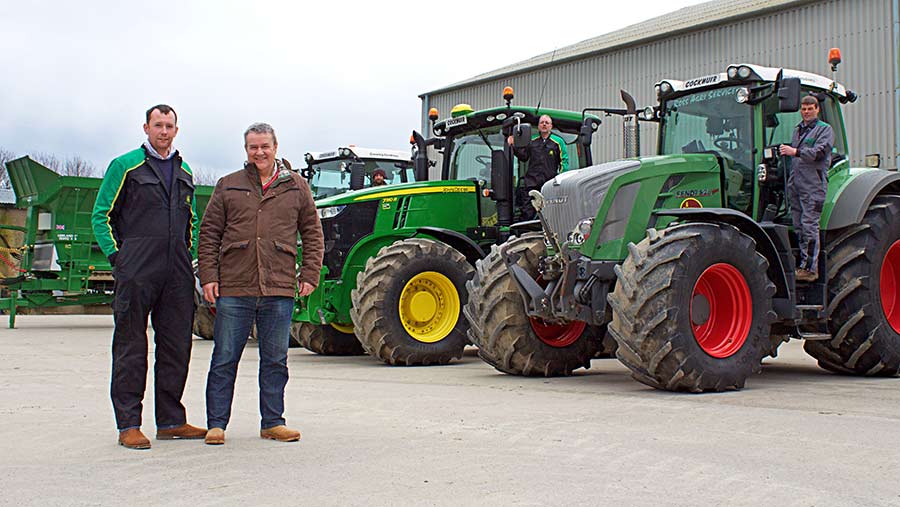 Ross Agri at Turriff is probably our favourite and that’s where all our Fendts have come from, as well as the Rogator we have just bought. They always give us a good service and nothing is ever too much trouble. We have also had good dealings with Groundwater Lift Trucks at Stonehaven, where we get our Manitous.

We bought a new Bunning Lowlander 150 during harvest last year and it has been brilliant. Because of the chickens we’ve got serious amounts of muck to shift, so it’s crucial to have a decent spreader.

We also specced it with GPS and weigh cells so that we can do variable rates. The fact that we put so much muck on means we never have to apply artificial P and K, so it’s worth taking the time to put it on properly. We also store all our muck in a shed so that it doesn’t leech or lose any of its nutrient value.

We have been particularly impressed with how evenly it spreads and it will easily fling the muck to 28m so we can run up the tramlines.

Staff: Iain, father Robert and eight others, plus 32 in the egg-packing plant

Before the Bunning we had a pair of 16t Rolland machines that we had hung on to for a bit too long and they were incredibly unreliable.

One was a 2003 model and the other a 2005, and they both suffered from broken gearboxes and bed chains – usually when you had just filled it to the brim. I have lost count of how many times we had to fork it all back out.

Our John Deere 7310R Autopowr is the most recent arrival and we have been pleased with it so far.

It’s a bit too early to give any decent comment on its performance, but because it’s a wee bit heavier than the Fendt it seems to grip better on the plough.

There’s no doubt the Fendt it a slicker machine to drive, though.

We haven’t got anything really ancient, so the oldest machine is a 2007 Manitou 634 telehandler. The clock broke a while ago, but we reckon it’s on about 8,000 hours.

Our telehandlers get worked pretty hard on mucking-out duties so we change them fairly regularly, but this one has stayed as it has been particularly good. It did have to have a new head gasket after about 5,000 hours, though.

It’s on its third set of tyres, which are always Michelins as we’re convinced they last the longest.

Most machines are bought with a five-year warranty and we do try to change them when that expires. However, sometimes we will hang on to a machine a wee bit longer if it has been performing well.

The Case-IH 195CVX warranty ran out last year and one of the Fendts is up next year, so we will have to work out what we are going to do with them.

It’s getting a bit tedious trying to plant 680ha with a 4m drill, so we are looking to go up to a 5m or 6m folding power harrow combination. We’re sticking with this method as it’s the most reliable system we have found for the catchy conditions we get up here.

We drill with a front press and we can go straight into the ploughed-and-pressed ground. At the moment we are torn between another Amazone or a Lemken Solitair.

Several years ago I managed to turn a load of woodchip over when going round a roundabout on the outskirts of Ellon. Thankfully there was very little damage done to the tractor or trailer, but we had a massive bill from the council to fix the damage to the road surface. It wasn’t a fun job clearing it all up, either.

We had a terribly wet harvest the year we bought our Claas Lexion and we had a nightmare trying to cut flat, wet corn with the 35ft header.

We put so much soil up it, we bunged up several of the augers and damaged the belts, too – it was soul-destroying to have to do that to a brand-new combine.

After we had finished we got our dealer to sort it out, which involved pulling out all the augers, cleaning them off and replacing most of the belts.

We built a mobile cattle handling race out of an old crush and a load of scrap we had lying around.

It’s about 25ft long and has two wheels that drop down at the back and a drawbar on the front so that we can tow it between fields. Because our ground is quite spread out it has been a godsend and has saved us loads of time hauling gates around.

It cost us £1,000 to put it together and an off-the-shelf equivalent would be about 10 times that.

The MIG welder and our Milwaukee ¾-inch impact wrench. The impact gun is amazingly powerful and will whizz wheel nuts off in no time.

We have also recently bought an electric grease gun, which is so much easier than using a manual one.

We do buy a few machines second-hand and the last one was the Challenger Rogator. We really wanted a new self-propelled machine, but just couldn’t justify the £200,000-plus price tag, particularly as we had nothing to trade in.

In the end we bought a tidy 2013 machine for £109,000, which was a massive discount for a machine that had done only three seasons of work. We also buy the odd machine through private sales or local collective auctions.

Combining in a year such as 2014, when we almost destroyed the combine.

I’ve got a 2013 Land Rover Discovery 4 Commercial that has been excellent. I had a Discovery 3 before, which suffered the usual suspension faults, but thankfully this one has been much better.

It has done 45,000 miles so far without any serious ailments. Fuel economy isn’t the best, though – I do a lot of short journeys and have a fairly heavy right foot so struggle to top 20mpg. 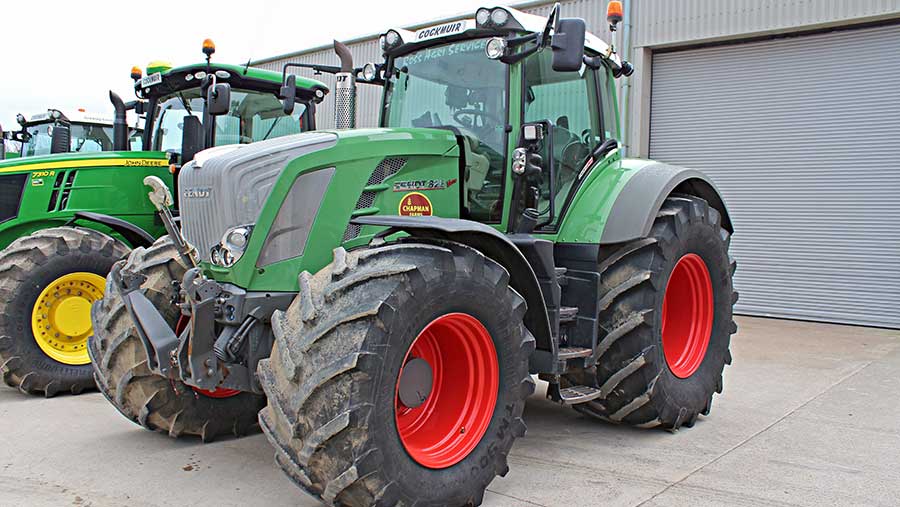 A Marshall 804 that we inherited when we bought a block of land. We thought it would be fine to run on a straw bedder, but the turbo and the clutch went, which probably cost more to repair than the tractor was worth.

We managed to pick up a 6m McConnel topper at a local auction for just £800. It’s in fantastic condition and it would have cost about £20,000 new.

We’ve got a Fordson Super Major that has been on the farm for years. We had it restored in 2013, but sadly it spends most of its time in the shed.