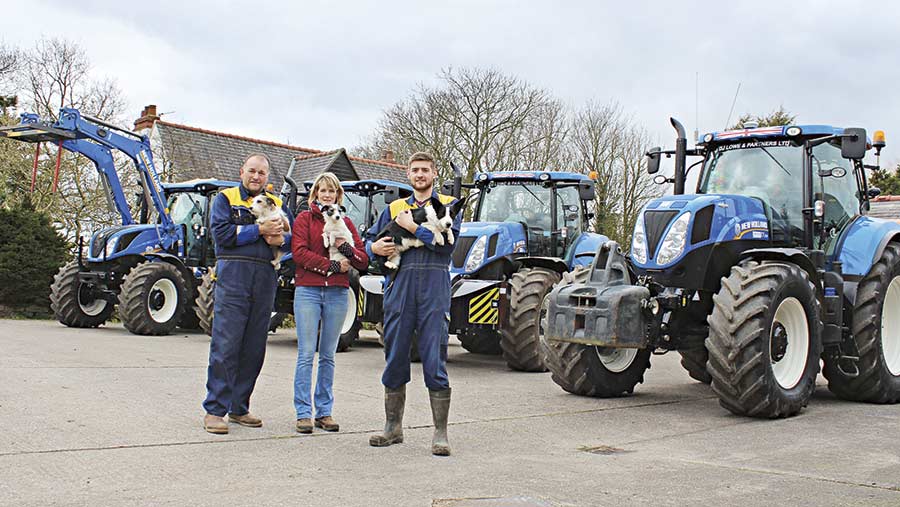 Graham, Tracey and Tom Lowe with terriers Pip and Gem and collie Max

Our latest What’s in your Shed? heads to Cheshire to visit mixed farmer Graham Lowe.

The families’ workload load includes a herd of beef cattle along with arable cropping and baling, as well as a farm shop and equine business.

He opened a simple farm shop a couple of years later and we have gradually built up the business from there.

Now we are farming a total of about 200ha, roughly half of which is rented, and we grow 40 types of vegetable to sell through the shop.

The shop itself was rebuilt and extended in 2015 and we are planning to add a café next.

We have been very brand loyal over the years, as we have two superb local dealers that we like to work with. One is Malpas Tractors, which is why we have a fleet of New Hollands, and the other is John Bownes.

Most of my other machinery comes from him and I also have quite a few classics that he sourced for me.

I have also had some classic Fords from John Tomkinson at Market Drayton, and Ellis Machinery at Gaydon, Warwickshire, is good to deal with – its machinery is always immaculate and the service is excellent.

Our Kuhn Primor straw chopper. When we got it 11 years ago it massively reduced our straw use. We’ve only had to replace one set of blades in that time and it still looks as good as new.

We had a Bomford Falcon Evo hedgecutter that we just couldn’t get on with. It was a high-spec machine with variable forward reach, but we found it very hard to control and almost impossible to keep the top of the hedge flat. We replaced it with a simpler Kuhn Pro-longer that we’ve been really happy with.

We have just taken delivery of an ex-demonstrator New Holland T6.180 that’s on about 200 hours.

It’s the newer shape machine and is so much more comfortable than the T6.175 we had before. We have only done a few hours in it, but so far it looks like a good purchase.

We used to have a K-reg Ford 7840 with retrofit turbo that was fantastic. We had it for 10 years and it easily coped with our Reco Mengele SH40 forager, which was fairly power hungry.

The tractor was supposedly running at 125hp, but we think it was putting out a fair bit more than that.

The only spare part it had other than oil and filters was the fan belt. It got traded in for a TM135 when it was on 7,840 hours, but I wish we had kept it, really.

Our current T7.235 Power Command comes a close second. It has more than enough power for what we need and it’s very smooth.

The worst was a New Holland T5 with a loader. The tractor itself wasn’t too bad, but the mounting brackets for the loader were too far forward, meaning it was incredibly front heavy.

After 12 months we got fed up with how light it was at the rear end and moved it on. Shortly after that I think New Holland changed the brackets on them, so later or modified models might have been fine.

We tend to keep our frontline tractors for three years and, because we only do about 500 hours a year, they’re still under warranty when we come to sell them.

To make sure we get the best trade-in prices, we look after them as best we can and they get treated to a full valet every season. It only costs £35 a tractor and it gets them looking like new.

Our older New Holland tractors get the same treatment, but we have no plans to change these.

The rest of our kit is changed when it’s worn out or we fancy a change. We are fastidious about looking after it all and everything gets stored under cover.

Our best buy has to be our New Holland 125 Combi baler. It was a demonstrator model that had done 700 bales and we were offered it for £20,000 less than the new price.

It’s very easy to use and so much quicker than running a separate baler and wrapper. We also like the fact that it drops the wrapped bale on to a mat, reducing the chance of wrap getting punctured.

A lot of our haylage is sold to horse owners, so it’s important we keep the quality high. For that reason we also put eight layers of wrap on each bale. Speed is pretty decent too, with it comfortably popping out 40 bales an hour.

We are still using an old 1950s Robot potato planter that my dad bought. It’s very simple with a land wheel and chain to turn the planting cups, but it does everything we need.

We’re looking to get an 80×70 square baler. At the moment we’re doing round, conventional square and 120x70s, but we think there is good demand for that interim size.

They are also good for the equine market as they’re just about small enough to handle manually. All our current balers are New Hollands, and this one probably will be too.

I was cutting a neighbour’s hedges, which I’d done for years, when I ran over the valve on a new underground gas tank they’d had installed.

It caused the tank to leak and the emergency services shut the road for 24 hours while it was sorted. My insurance company also had to provide a new tank.

We were landed with a £6,000 bill on our New Holland BB950 baler when one of the needles pushed something tough (we’re not sure what) into the knotter and smashed it. Malpas Tractors did the repairs for us and thankfully our insurance covered the fee.

It’s very simple, but we made an inter-row side-hoe weeder out of an old ridger. It works well, cost us nothing and was quick to put together.

I have one of the last twin-cab Land Rover Defender pickups. I used to buy them with discount vouchers from the NFU and change them every three years, but obviously that has had to stop now.

I sold the last one to the tuning house Kahn Design, which was planning to bling it up, and it only cost me £3,000 to change. This latest model is on 16,000 miles so far and I’ll be hanging on to it.

Do you have any classics?

I have quite a few that I’ve picked up over the years, most of which are Fords and David Browns. A few of them still get used on our vegetable ground, but most are stored. They are all run up at least once a year though.