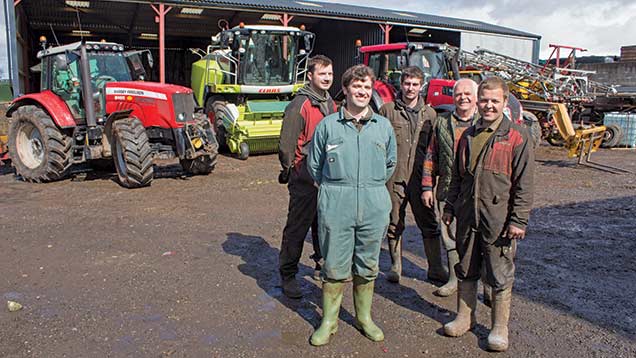 In the latest in our series, we visit Eden Valley farmers Jonathan and Thomas Schug for a tour around their machinery shed.

See also: More from our What’s in Your Shed? series

As a family we have had Massey tractors since the 1970s and we have been pretty loyal to the brand.

We have had a few Valtras over the past 10 years, though, and for other equipment we buy purely on whether we think it’ll do the job we want.

DW Toppin at Langwathby is our favourite. David Toppin is always at the end of the phone and the service those guys offer is excellent.

Longstaffs, just up the road at Murton, is also great on the Massey Ferguson side. We use Rickerby at Penrith for the Claas stuff, which is good too.

The Jaguar 870 (above) has to be our favourite. We bought it new last year to replace an old 900 and it’s in a completely different league.

The weak point of the 900 was the front end and we struggled to get the crop in fast enough to get the best out of it.

But with the 870 you can push it on as hard as you want and it keeps taking it. The cab is also much more spacious and comfortable and the visibility is better, too.

We also like the dynamic power function that only delivers the power you need.

The Twose flat roller. It has been ripe for renewal for the past five years, but we always find something more interesting to buy.

At the moment it’s leaking water and the end bearings are falling apart. We also had to replace the central shaft a few years ago, which was a pig of a job.

The newest machine in the yard is a Valtra T163 (above). We were thinking about going for one of the new T-series, but the deal was good and we’re pretty happy with the older type.

There aren’t many second-hand Valtras around on low hours, so when we spotted this 2013 one with 1,000 hours on the clock we went for it. We’ve also had it remapped to 200hp so it flies along with the triple mowers.

It has been a tough old thing and still gets used every day. It doesn’t get a lot of TLC, but we give it an oil change fairly often.

It also gets fresh water every couple of months – but that’s just because it likes to pop a core plug every now and then.

We try to keep a mix of newish low-houred machines and older cheaper ones, but there are no set rules.

A tedder that keeps hold of its tines. We get really heavy grass crops in this area and all the tedders we’ve tried just aren’t up to the job.

You will often lift out at the headlands and half the tines will have snapped or the bolts have sheared off.

At the moment we’re thinking of running two machines and going slower.

Thomas: I was hauling a load of hay down the road when the drawbar ring popped off the pick-up hitch.

The whole lot shot off down a hill and flipped over. Luckily it didn’t hit anyone or anything.

Jonathan: I was having a bit of bother with the umbilical pump and had left it running without slurry pumping through.

This caused the liquid that was in the pump to warm up. I then knocked a clip, the pipe came off and I got covered in scalding hot slurry.

The belt tensioner on the Claas chopper – it’s pretty much impossible to get to.

See also: What’s in your shed visits a Cornish contractor

We don’t build many things from scratch, but we do a lot of modifications and improvements to existing machines. The most recent is putting a Land Rover 200Tdi engine and automatic gearbox in our Agribuggy Stealth (below).

The old 1.8-litre Ford diesel really struggled on the banks, but it flies along now. We also modified an old Armstrong Holmes low loader for carrying the digger around and made a stock trailer that can be used for bales when the body is removed.

We buy a mix of new and second-hand machines.

Six-cylinder Valtras are hard to find second-hand in good condition and with low hours, so two out of the three on the fleet we bought new.

Masseys seem easier to find so we bought a couple of these second-hand. Longstaffs up the road are also great at looking after them.

Foragers Claas Jaguar 890 and 870 with grass and wholecrop header

Thomas: Driving the forager and spraying.

Jonathan: Square baling when it is going badly.

Jonathan: A Land Rover Discovery TD5. I’m a bit of a Discovery fan, but it has had a few problems. It had a coil spring conversion several years ago as the air suspension was so bad and it’s had a couple of head gaskets.

Thomas: A 2002 Ford Ranger pickup. It has done 110,000 miles and is mechanically sound. I’ve hurled it around a bit so the bodywork isn’t the best.

Our old Massey Ferguson 6150 has easily been the best. It’s only got about 95hp under the bonnet, but it used to do all our chopping with a Mengele trailed forager.

What it lacked in power it made up for in grip and we took pleasure in embarrassing some of the local New Hollands on the hills.

It’s now done about 11,000 hours and has had very few problems, other than chewing up a couple of rubber couplings in the pto driveline and a fuel pump failure.

It still sits on the feeder wagon every day.

Worst machine you’ve ever had?

We had a John Deere 7800 forager a few years ago and couldn’t get on with it at all.

The quality was nowhere near as good as the Claas and on two separate occasions we had a rear wheel drop off in the field.

It has done about 1,000 hours a year ever since and has never really given us any problems.

We’ve also got a twin-axle Abbey slurry tanker that we picked up cheap and restored here. It looks as good as new now.

A bigger machinery shed, a purpose-built workshop and a Massey Ferguson 1250.

We’ve got a Case 434 industrial (above) that’s permanently hooked to the cubical bedder and the MF165 scraper tractor.

All the tackle is used – we don’t have time for machines that don’t work. Dad has got a vintage Land Rover 1-series, though.