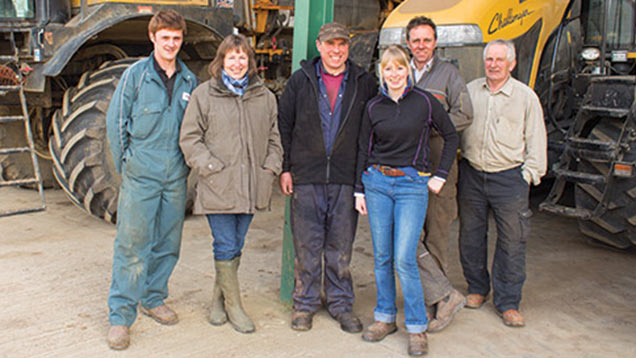 I have been reasonably loyal to JCB and Case-IH over the years, but I’d be prepared to switch to other brands if the product looked better.

Our first red tractor was a 1982 International 955 and we have been mostly Case since. We have had a couple of John Deere’s and a McCormick though.

AT Houghton is the best dealer near us by far.

They are open on Sundays, the staff are always helpful and the backup is excellent.

When we had a troublesome McCormick they gave flawless backup.

Now they are a Deutz-Fahr dealership but we have not bought one yet so we use them for parts and implements now.

On the plant hire side, we have always had good dealings with Watling JCB at Whetstone.

See also: Check out our interactive map of our previous What’s in Your Shed issue

Cropping Wheat, oilseed rape, maize, barley and spring beans – used to have a wheat and rape rotation but blackgrass forced a change

Our Knight 2050 sprayer and the two-way radios we picked up from a taxi company.

We have got them fitted in every vehicle and it’s brilliant and we have effectively got our own private CB radio system.

We only had to make a one-off payment for the licence and they cover a 30-mile radius.

Our John Deere 680 square balers on a bad day.

When they’re going well they are brilliant and reliable, but sometimes they just play up and are complete pigs. Within the first 20 minutes of work you can usually tell if it is going to be a rough day.

We have just bought a Case Puma 230CVX.

We had it on demo a little while ago and it was a brilliant all-round tractor.

This will be our first with a CVX transmission and we hope it will be more reliable that the previous ones we’ve had with the semi-powershift box.

For the first time we decided to go for the 4,000-hour warranty package.

We also recently bought a Claydon hybrid drill and we’re hoping it will help us plant wheat into maize stubble.

Our International 955XL is still working every day on the straw bedder and it is now done about 18,000 hours.

When we bought it in 1982 it was our biggest tractor and did all the ploughing and foraging work.

At the time we thought it was so big.

Other than the bedder it does a bit of tedding and bale wrapping. It’s also quite a rare model as they only did the 955XL with this cab for 18 months before it was replaced by the 956.

It is a really mixed bag – some machines will only stay around for a year or so and others we’ll keep for years and years.

Theoretically most of the kit is for sale at the right price, particularly on the plant hire side.

What is next on your wishlist?

An eight-wheeler tipper lorry for the plant hire and lime side of the business, as well as two more Bailey trailers on flotation tyres. We’ve had a few Bailey trailers and they are really well built.

We had a Fastrac with an air leak and I’d hopped on the seat to move it.

There was not enough pressure in the system to get the hand brake to release, though, so while I was waiting for the pressure to build up I went to fuel up the other tractor.

Meanwhile the Fastrac got the air it needed to release the handbrake and it came careering past me.

Thankfully we were putting up a shed at the time and it came to rest when one of the wheels dropped into the footings.

Plant hire More than 40 machines on the fleet including 19 excavators from 1t to 20t, five JCB 3CX wheeled diggers and nine telehandlers. There are also two lorries for moving it about.

What is your best invention?

My brother Leon made a 9in trenching bucket that’s made the job so much quicker.

He basically welded a plate in the front of the bucket so it does not get bunged up with sticky mud.

It is really simple, but makes a massive difference.

He also does a lot of clever modifications to our existing machinery.

Steve – he can fix anything, is a dab hand with the welder and is brilliant at keeping the peace. He and Leon are the magic wands of the workshop.

If a machine is in good order and the deal is right, we’ll buy second-hand. One of the latest used buys was the Magnum 7230.

We wanted a simple, high-horsepower cultivation tractor and it fitted the bill perfectly.

Spraying as it means I can get a good look at all the crops across the farm.

Anything to do with grain dryers

We never spend a lot of money on farm run-arounds.

At the moment we have got two Citroen Berlingo vans, two old L200s and two Defenders.

The Berlingos are the best though – they’ll go almost anywhere, are reliable and use very little fuel, unlike the L200s.

Any of the JCB Fastracs as they are amazing for the work we do, particularly haulage and lime spreading.

They are also incredibly smooth on the road and the brakes are top notch.

Worst machine you have had?

We have had a couple of bad tractors.

The first was a McCormick MTX 215 that was incredibly unreliable.

That had a massive list of replacement parts including a new sump gasket, propshaft, front diff and hubs.

Once we had done all that, we had to go back and start replacing it all again.

It all happened outside the warranty, too.

It was a lovely tractor to drive though – just terrible to own.

Our Redrock dump trailer that we bought second hand about four years ago for £4,000. It gets used constantly and has stood up to all the abuse it’s been given on the plant side.

We do our own version of JCB’s dancing diggers and travel around a few of the local shows each year, the children love it.

We have gone into growing and supplying maize and grass clamps to local dairy farmers last year. It was partly to help beat the blackgrass problem.

We also charge for some of our foraging work by the tonne and have bought a portable weighbridge to make the job more accurate.

It is a Griffith system and has been a real bonus so far.

It is much more accurate than the Harvest Lab system on the Claas Jaguar forager.