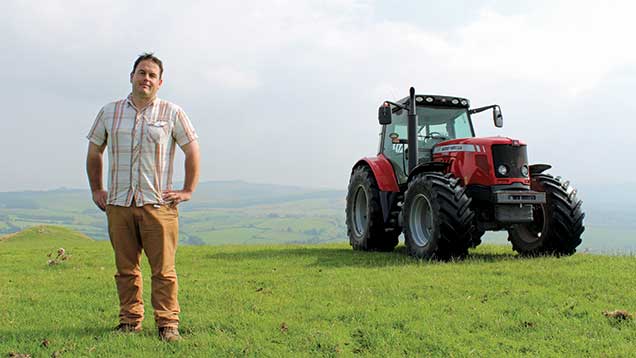 Powys sheep farmer Dylan Owen gives us a tour of the machinery fleet he runs on his 120ha hill farm in the village of Talerdigg. Highlights include his restored Track Marshall crawler, Massey Ferguson 6480 and a Merlo 32.6 telehandler.

How loyal are you to individual brands?
We’ve demoed lots of different machines from different makers and dealers over the years. But when it comes down it we usually stick with the same brand and dealer as we’ve got good relationships and backup.

Who is your favourite dealer?
RVW Pugh in Churchstoke – We buy almost everything from there.  It sells products that suit us and the service is good. David Jones Motorcycles in Newtown also deserves a mention. We’ve had about 15 Honda quads from there and the service has been flawless throughout.

Favourite piece of kit?
Definitely the 6480 – it’s got plenty of power without being too big and does everything we need it to. One day it’ll be hauling the forage wagon and the next it’ll be shunting down the shed with the straw bedder.

Least favourite piece of kit?
The slurry tanker. There’s nothing wrong with the machine, it’s just a job I hate doing.

Latest purchase?
A Quad-X trailed weed wiper. We prefer to spray thistles, bracken and rushes because it’s a more permanent solution than topping.  The weed wiper allows us to get to more awkward or steep areas where we wouldn’t even take the Track Marshall.

Oldest piece of machinery still at work?
A Votex 9ft topper. It’s more than 30 years old and still just about going. It is starting to lose the battle against age, though, and it’s had a few too many encounters with hidden rocks.

How long do you keep your machines?
We used to have a fairly strict replacement policy and keep our machines bang up to date. But as new machine prices have rocketed we’ve found the figures for upgrading a bit hard to stomach. The result is that the question of whether to change or run a machine on and put up with a few bills has become a lot less clear-cut.

What’s next on your wish list?
It’s time the Merlo was changed but the deal just does not seem right at the moment.  I’m more likely to change the tractor, perhaps for one of the new higher horsepower four-cylinder models.  By all accounts the MF 6616 is a real weapon.

Most embarrassing machinery mistake?
There are two – my father once drove Pugh’s demonstrator 6480 off one of the farm tracks, over a bank, and down into a shelter belt of trees, damaging the roof and bonnet.  That was an awkward phone call.

The other happened about two years ago when I parked the tractor and forage wagon on the yard of a farm we were renting. About five minutes later there was a sound like thunder and we rushed over to find an empty yard. The tractor and wagon had inched forward and disappeared down the steep lane jacknifing in the middle of the road. We pulled it back straight and the only damage was that the tyre had blown off the rim. Within half and hour we were going again.

Most awkward grease nipple?
The one at the base of the boom on the Merlo. You have to climb down between the cab and engine bay, and it’s tight.

What’s your best invention?
We’re not very creative really.  Putting an old quad rack on the weed wiper so we could mount the chemical tank on the wiper frame is about as good as it gets.  We did it because it’s really dangerous having the tank on the quad with all that water sloshing from side to side above the centre of gravity on a steep slope.

What couldn’t you live without in the workshop?
1. Power washer
2. Cordless impact wrench
3. Inverter welder

Contracting 500-acres of grassland contracting including mowing raking and tedding.

Staff One full-time shepherd and casual help when busy

Do you buy second hand?
Not usually, but if the right thing comes up I will.  It has to be very well looked after though.  You can tell straight away what kind of life something has had.

Favourite job/ least favourite job?
Favourite – Mowing, there’s something very therapeutic about creating all those  lines.  They are hardly ever straight though.
Least favourite – Slurry tanking and changing mower blades.  The Vicon mower has a triangular three-bladed disc that is not quick release.  It takes ages even with an impact wrench.

What’s your everyday transport?
The main farm vehicle is a 2010 Landrover Defender 90.  Apparently Land Rover is discontinuing the Defender in 2015 and I’m secretly praying that the replacement does not deviate too much from the original.  The concept pictures I’ve seen don’t look promising.

Best tractor you’ve ever had?
The current 6480 is probably the best. It’s a bit more refined than the older models, reliable, powerful and not too big.

Biggest machinery bargain?
The Pottinger wagon.  Compared to what it would cost to buy now, we got it for a song.  It’s paid for itself many times over with no major hiccups.  It’s a cheap, gentle harvesting method and it’s astounding how much ground you can cover in a day.

What would you buy if you won the lottery?
A flat farm and a Challenger.

Any machinery toys/ classics lurking in the shed?
I have a MF35X that my grandfather bought in September 1963. It’s had a replacement engine at some time but mechanically it’s totally sound.  A cosmetic restoration will be on the cards at some point.  I suppose that’ll end up being a retirement project.