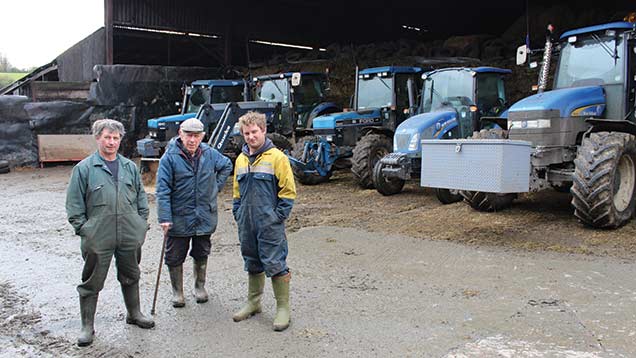 Well, my grandad had his first Fordson in 1931 and we’ve been blue ever since. We’ve always liked the Fords and New Hollands, and the dealer back-up has been good, so we’ve always stuck with them.

C&O Tractors is our favourite. We’ve dealt with them for years and get almost everything from there now. The Claas stuff comes from Vaughan Agri in Frome and it’s pretty good, too.

The trusty Ford 7840. We bought it new in 1994 and it’s just nudged over 12,000 hours. It had a turbo fitted at 3,000 hours so it could handle the old Jaguar 75 forager and when we put it on the dyno it pumped out 135hp. We did have to uprate the main bearings to the turbo spec, but it’s taken the extra power pretty well otherwise. It’s still nice to drive and its main duties are maize drilling, grass seeding, slurry tanking and trailer work.

Contracting: Working with a neighbour, they carry out 400 acres silage contracting over four farms.

Staff: Andrew, Paul and John plus one part-time worker

The old over-the-top slurry stirrer. It sways around on the back of the tractor and it’s so old and rusty the arm keeps breaking off. To be fair, it’s been around since 1975, so it’s doing pretty well. Doesn’t mean I like using it though.

The oldest machine in regular use is the Welger AP53 conventional baler. It’s a 1983 model that we bought second-hand about four years ago. This season I made 10,000 bales with it and it didn’t skip a beat. I don’t think there was a broken bale among them. We run it with a brand new Brown flat-eight sledge and we’ve got a 48-bale squeeze on the back of the tractor for gathering them in.

The ones we really like tend to stay here for good and the others get shifted on when they start costing too much to patch up.

A new set of mowers. The Pottingers have done a lot of work now and we had such a heavy crop this year the grass kept binding up on the conditioner belts. Another Pottinger outfit could be on the cards and we might be tempted by a set of Krones.

This year I managed to put a massive crease in the TM155’s bonnet when the buckrake flicked back on itself – I still don’t really know how it happened. I did the same thing to the TM125 we had before so I’m clearly not a fast learner.

Dad also managed to skewer one of the front tyres on the 6040 with half a broken gate bar.

The one on the top of the slurry stirrer – you have to get lifted up in the cage to get to it.

What’s in your shed?

Parlour: 13×13 Deleval herringbone. It started life as a four-a-side parlour and has been added to over the years.

Dad built a front weight block that doubles up as a post knocker. By putting loader brackets on one side we can pick it up with the Quicke and bash posts in. It also makes it easy to lift it on to the tractor.

The arc welder and the gas torch

We buy used stuff most of the time. The only new tractor we’ve bought for ages is the little T4 scraper tractor. Most of the others were two-to-three years old when we got them. We don’t usually have any warranty agreements, but we do tend to get them from our dealer so that we get some back up.

Mowing is the best by far. It’s speedy, satisfying and the weather’s usually decent.

A 2007 Ford Ranger Wildtrac – it’s got the 3-litre engine and pulls like a train. It’s a lot more refined and comfortable than the old Defender 90. We’ve kept that as another farm run-around, though.

Probably the Ford 5610 we traded in a few years ago. It sat on the feeder wagon day in, day out for years and never gave us any trouble. It was nice to drive, too. I wish we’d kept it really.

The Moore direct drill was a pretty good buy. We shelled out about £1,200 for it five years ago and it’s been brilliant. It reseeds about 40 acres a year and we’re constantly using it for patching up grotty areas. It’s ancient, but still goes well.

I’d buy more land and get more cows. We’re in it for the long run, despite the TB and terrible prices.

Any machinery toys/classics in the shed?

I’m a bit of a collector and have restored a few tractors recently. I’ve got a Fordson Power Major that my granddad bought new, a Ford 4,000 that we dragged out of a neighbours hedge and I’m currently working on a 1967 Dexter. A friend’s 500hp tractor puller is sitting in the workshop at the moment, too.

New Holland’s TM tractors have been known to give the odd mechanical niggle and Andrew Gould’s TM155 is no exception.

Since it turned up on the farm three years ago it’s had the brakes, gearbox clutch packs, fuel pump, viscous fan and radiator replaced, and a couple of weeks ago it decided to destroy its engine.

“The hydraulic tappet failed and shattered the collet, which caused the valve to drop into the cylinder and embed itself in the piston,” he says. “This then set about destroying the head.”

It happened just after he pulled on to the main road and he managed to duck into a layby before it did too much damage. “The banging coming from under the bonnet was horrendous.”

An engine failure sounds a bit unacceptable for a six-year-old tractor with 5,400 hours on the clock, but it’s not really the tractor’s fault, says Mr Gould. “As standard it pumps out about 150hp, but we’d tweaked the pump so much it read 190hp when we put it on the dyno.”

That meant it flew along with the farm’s front-and-back Pottinger mower conditioners, but it did kick out plenty of smoke when it was working hard, he says.

Mr Gould bought the TM155 three years ago, and with a five-furrow Dowdeswell plough in the deal he paid £30,000. Since then the tractor has clocked up 2,400 hours doing anything from mowing and silage hauling to ploughing and power harrowing.

Despite its mechanical niggles, Mr Gould reckons its been a decent tractor for the money. “It’s powerful, comfortable to drive and reasonably priced,” he says. “It’s had its problems, but to be fair we’ve pushed it pretty hard.”

The TM155 isn’t the first New Holland Mr Gould has tinkered with. Before he had a TM125 that was managing to muster 200hp at the shaft. “That one went seriously well,” he says. “The gearbox was simple so it didn’t sap much power and we never had to knock it out of top gear on the road.”