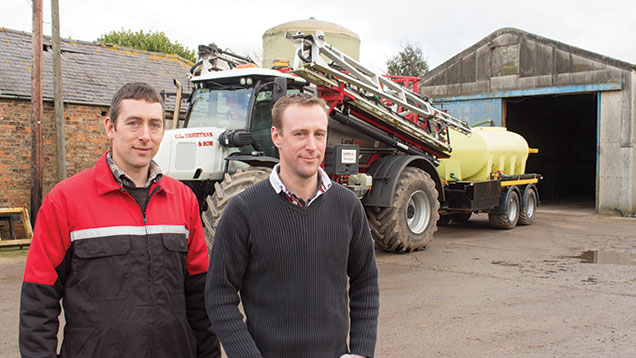 Knaresborough-based contractors Richard and Chris Tesseyman are the latest to let Farmers Weekly rummage around their machinery shed.

We’ve been fairly loyal to New Holland over the past few years, but we’re always eyeing up the competition. We’ve already got one Massey on the fleet.

Russells at Boroughbridge – the guys there have been great to us over the years and the parts manager is fantastic.

It’s fair to say we’ve had some problems with our New Hollands over the past few years, but they’ve always sorted us out. Frank Curtis is also good on the MF side, even though we didn’t get the tractor there.

The two Multidrive sprayers are our favourites. They’ve got a Z-F powershift gearbox, a solid mechanical drive and low-pressure tyres running at 12psi on the front and 14psi on the back.

That means they never lose traction and will go almost anywhere.

We have had a couple of problems with the John Deere six-cylinder engines, though.

The older model had to have  a new head gasket and water pump and the new one ran so badly, Kellands replaced it with a new one. Thankfully this one is going well at the moment.

The 2.5m Sumo Trio is our least favourite. There’s nothing wrong with the machine itself, but it makes the tractors drink gallons of fuel and it costs a fortune in wearing parts.

You don’t usually need to work the ground that deep either.

We bought a 7.5m Claydon straw rake at last year’s Cereals event and it’s transformed the job of preparing the ground ahead of our Hybrid drill. We fly over the stubbles with it at about 23kph and it does a brilliant job of killing slugs, getting weed seeds to chit and levelling out trash.

Before we were using a set of lightweight discs, but they worked the ground too much and could make a bit of a mess.

Our main telehandler is a trusty old H-reg JCB Loadall 525-58.

It’s been on fire twice, has done about 10,000 hours and one of the spools sticks. But it’s still going strong and doesn’t owe us a penny.

A while ago we came up with a plan to change the tractors every three years.

But the price of new replacements got so high that the plan soon went out of the window. Now we tend to change according to hours and reliability and often buy second-hand.

We’re also coming round to the idea of having a larger number of older tractors, as it gives us a lot more flexibility for our money.

A new tractor, grain dryer and telehandler, but unfortunately we won’t be getting all three at once.

At the moment the tractor is looking like it will be a New Holland, Massey Ferguson or Case.

Richard: I don’t have many accidents, but when I do they’re usually good ‘uns.

I once flattened an electricity pole with the tractor and took out the power to two villages.

I also wrecked the unloading auger on the combine while trying to shunt it around the yard.

Chris: I once drove away from the artic fertiliser bowser without detaching the pipe and pulled the pump off the sprayer. I also put a trailer through the shed roof.

The prop shaft on the Multidrive. You have to grovel underneath and rotate the shaft until it’s in the right place.

We also had to grind a flat spot into the end of the grease gun to get it in the gap.

The most useful is an adaptor frame we built for the JCB that allows us to flip a powerharrow on its side. It means we can change the tines in no time without having to get underneath it.

We also made a monster log splitter using a hydraulic ram from a JCB back actor.

The Mig welder, followed by the plasma cutter, tig welder and the alarm system to help keep it all in there.

Most tractors come with a few hours on the clock, but we buy the Multidrives new. We often get implements second-hand, too.

Richard: Combining, liquid-fertiliser spreading and drilling with the Claydon.

Richard: Office work – there’s far too much or it these days.

Chris: Cleaning out the grain dryer.

The general farm run around is a Transit Connect that we bought mainly for doing our sprayer MoT testing. It hasn’t done that much work, but has done pretty well so far. It’s pretty steady, though.

We had a Massey Ferguson 6180 that was fantastic.

A lot of them were a nightmare, so we were very lucky. It clocked up about 8,000 hours with us and never skipped a beat. It smoked like hell, though.

Worst machine you’ve ever had?

We bought a new Lite-trac sprayer a couple of years ago that was a complete disaster. The diffs in both axles chewed themselves to bits, the sprayer controller didn’t work properly and the booms were bent.

And that was just the start of it. We sent it back and got another Multidrive instead.

The 4m Reco drill – we picked it up for £1,500 when it was only about five years old and it looked like new. Considering they were about £35,000 new it was a pretty good deal.

We had an Accord before that we couldn’t get on with. It wasn’t strong enough and it was difficult to set drilling depth accurately.

That buying new means you won’t get breakdowns.

We’ve found it’s better to get a machine that’s a couple of years old once all the niggles have been ironed out.

A Bowler Wildcat and our own farm.

We’ve got a couple of dust-gatherers.

The first is a Massey 35X that’s addicted to Easy Start and a David Brown 2D Tool Carrier that we used to use for side-hoeing sugar beet.