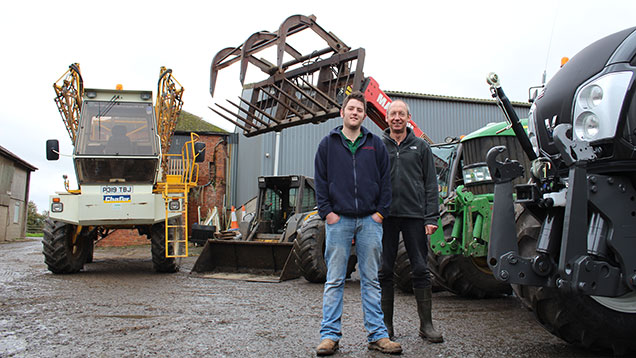 Yorkshire pig farmers Dom and Richard Foster are the latest producers to give Farmers Weekly a tour around their machinery sheds.

We’ve never really stuck to one brand. If a particular machine looks well-made and capable, we’ll give it a try. We are pretty loyal to our local dealers, though.

See also: Map: Best of our What’s in Your Shed series

Our three main dealers RBM, Russells and W Scruton. We buy most of our machinery from these guys and all of them have excellent back up, parts and sales departments.

The Lemken Solitair 8 drill – it places seed brilliantly even in a bad seed-bed. It’s probably the most versatile and forgiving drill we’ve ever had.

Before we had a mounted Vaderstad Rapid 30, which we didn’t get on with at all. If the ground was bone dry and rock hard, it did a half-decent job.

But as soon as there was a bit of moisture it made a horrible smeary mess. The paddle levellers at the front also liked to roll up cheesy balls of soil.

Knocke discs – the grease nipples are impossible to get to and they block up just by looking at soil.

They’ll be in the workshop for an overhaul this winter and we’ll try and get some better scrapers made. We’ve had them since 1985, though, so they don’t owe us much.

We don’t have a fixed replacement policy. Instead we tend to move machines on when we’re fed up with them breaking down too much.

As a rule, I prefer to run an old machine I know, rather than a new or second-hand machine that could be unpredictable.

A combine and a grain store.

When I’d just started doing a lot of tractor driving I went to roll some grass for a customer.

While unfolding the rollers I realised I hadn’t locked the hitch and spent the next hour sitting on the roadside with the drawbar pointing to the sky.

The universal joints on the Manitou. They’re a right faff.

A tool to remove used cartridges from grease guns without getting covered in grease. It’s simple, but very effective.

The cordless drill – it’s constantly in use.

Yes, but I’m very picky and I’ll only buy from a trustworthy source.

Drilling and making silage are my favourite jobs.

It’s a replacement for a T163 Eco we bought last year that turned out to be a bit of a dog.

There were so many problems I only managed to clock up 950 hours in the first 12 months. I did put a fair few on the string of demonstrators that came in when it was being fixed, though.

To be fair, our dealer, Scrutons, were brilliant and hopefully this new one will be better.

A 2012 Isuzu D-Max, which I bought second-hand from York Van Centre.

It’s been brilliant – economical, comfy and smart enough to use as a car.

The steering was also a tad sensitive on the road.

It was replaced by a 6920, which was a bit more comfortable, but didn’t pull anywhere near as well.

The Kuhn rake – it paid for itself in a year and is still going strong.

Biggest myth to do with machinery?

That one brand is better than another. They aren’t. They all break down at some point and it’s the dealer backup that really matters.

The first thing I’d do is buy a third tractor. We manage with two, but it gets a bit hectic at busy times. Then I’d go looking for a 1,000ha block of arable land.

A home-made go-cart, with a 5hp Briggs and Stratton lawn mower engine. It goes brilliantly, but we are all a bit too heavy for it now. I’ve also got a Vauxhall Astra GTE road rally car that’s looking for a new home.