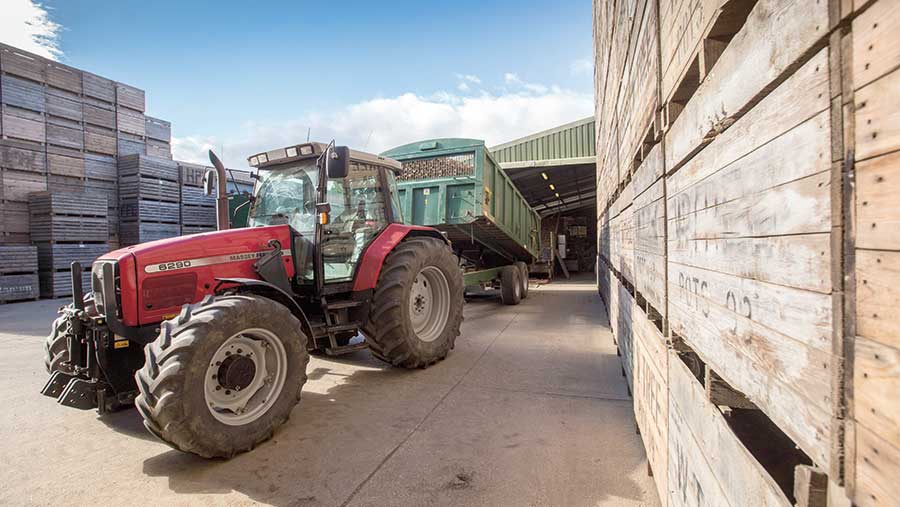 Machinery manufacturers are facing calls to install external “kill switches” to all new tractors so engines can quickly be turned off in an emergency.

Farm leaders say manufacturers could do more to make tractors safer to operate from outside the cab – despite several high-profile campaigns aimed at reducing the number of farm accidents resulting in serious injury or death.

A motion requesting that tractor manufacturers should be required to install external stop controls to all new machines was unanimously passed by a meeting of the NFU’s ruling council on Tuesday (20 June) at Stoneleigh Park, Warwickshire.

See also: How a farm contractor rebuilt his life after losing an arm

Members of the union’s East Midlands region proposed the motion.

It comes ahead of the busy harvest period – which often sees a spike in farm accidents in one of the UK’s most highly mechanised agricultural areas.

Seven people were killed in accidents involving farm machinery in 2015-16, according to Health and Safety Executive (HSE) figures. Little – if any – improvement in the number of fatalities is expected when the latest figures covering last year are released early next month.

NFU Lincolnshire chairman Mark Leggott said: “One of our members had two near misses while hitching up implements on his own.

“He felt very strongly that an external emergency stop button would have stopped things dead and he wouldn’t have been at any risk of injury.”

Farm accidents in recent months include the death of well-known and respected Somerset farmer Derek Mead, who was crushed by his own farm loader. A HSE investigation is examining whether Mr Mead’s dog knocked the machine into gear while it was still running.

NFU vice-president Guy Smith said: “The most depressing part of my job is receiving notification of farm fatalities from the Health and Safety Executive.

“I had three yesterday and I received another one last week. It is the same circumstances again and again.”

Mr Smith said farmers had to seize the opportunity to raise awareness about this ongoing issue.

But it was important to do so sensitively without upsetting farming families who had lost loved ones in accidents involving machinery.

Too many farmers get off vehicles while they are still running – despite an industry-backed “Safe Stop campaign (see “Safe Stop”). Mr Smith added: “I don’t say this from a high horse – I have done it myself – and I am ashamed to say I have put myself in dangerous positions too.”

“This is certainly an issue I am sure they [manufacturers] will be interested in looking at.

“I know there has been an upturn in serious accidents and fatalities involving tractors since the start of the year.

“Many have involved crush injuries of one kind or another. Some of these incidents could have been avoided if the machine had been turned off properly.”

But he added: “Without knowing the details of individual cases, it is difficult to know whether an external button would have helped.

“We are members of the Farm Safety Partnership and we would welcome any measures that reduce the number of deaths on farms.”

Handbrake on, controls in neutral, engine off, keys out 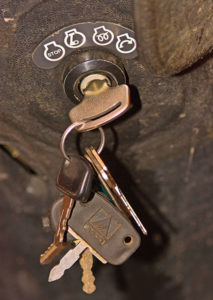 Farmers should use a “safe stop” procedure before leaving the driver’s seat of any tractor or piece of farm machinery, says the Health and Safety Executive (HSE).

Whenever using machinery – especially before leaving the driver’s seat, operators should ensure that the handbrake is on, controls are in neutral and where possible, the engine is turned off and the keys are removed.

Launched almost four years ago by the Farm Safety Partnership, an industry-backed Safe Stop initiative is believed to have saved a number of lives. But being run over by farm vehicles remains a major cause of death and serious injury in farming.

NFU Derbyshire county chairman Angela Sargent said: “We all know that before you get off a machine you should turn it off – we are not disputing that. But it doesn’t always happen and an external kill switch would give farmers that extra bit of protection.”

Well-trained drivers and machine operators following “Safe Stop” procedures  are arguably the most significant steps to reducing the number of people killed by tractors and machinery, said Mr Brunt.

But he added: “This resolution does open some very interesting areas for discussion and HSE would be happy to join the conversation.”

A special event this autumn will bring together 100 farmers as the NFU ramps up its efforts to improve agriculture’s poor safety record.

Held by the union in partnership with the Health and Safety Executive, farmers attending the event will be encouraged to share ways they are making on-farm safety improvements.

It will be held on 30 October at Stareton Hall, Stoneleigh Park, Warwickshire.

“We are working with the HSE to really try to change things within the industry,” explained NFU health and safety adviser Tom Price. “Agriculture has a problem. It is not last year or the year before, it is a long-term, deep-bedded problem.”

Regulation and technology would not provide a quick solution, said Mr Price. Instead, a culture change was necessary.

“A big part of the problem is people’s attitudes to health and safety, towards risk taking and managing that as part of their normal day-to-day activity.”

Mr Charles-Jones said he had encountered two serious farm accidents during his career. One involved a young farmer who lost his leg kicking a clod off a rotovator.

More recently, a local farmer had lost both his legs when he was run over by a reversing grain trailer.

“Each of those incidents has had a really profound impact on me,” he said.

“It is really sad that we need these really bad lessons to make us do something about it.”

In a moving tribute to Somerset farmer Derek Mead, who died in an accident earlier this month, Mr Charles-Jones said: “Many of us remember Derek as an NFU council member. He was one of us.

“A fitting legacy we could give Derek would be to finally tackle this issue.”

The NFU had a responsibility to its members, farm staff and farming families to put health and safety at the top of its agenda, said Mr Charles-Jones.

“The industry track record is just appalling – it is time to stop talking and do something,” he added.

“Should we all be going down the annual tractor MoT route? Having those handbrakes checked? Do we want to? Of course we don’t. Do we need it? Yes, we probably do.

“Perhaps if we have those MoTs, perhaps they can offer us insurance discounts.”

Farmer’s pledge of 30 improvements in 30 days

Hertfordshire farmer Stuart Roberts (pictured) has pledged to make 30 safety improvements over the next month – and is urging other farmers to do the same. 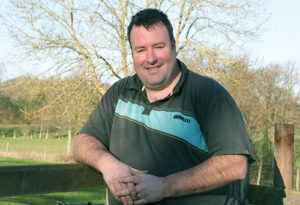 The false limb belonged to Mr Latham’s late grandfather Len, who lost his real leg after it developed gangrene when a shire horse stood on his foot.

The decision to implement an on-farm safety programme was a direct consequence of inspirational speeches made by Mr Latham and Nottinghamshire farmer John Charles-Jones at this week’s NFU council meeting, explained Mr Roberts.

He said: “I thought long and hard on the way home about what was said and I decided on my farm we are going to make one safety improvement every day, for the next 30 days. It will make a massive difference to my business, my employees and my family.”

The first improvement was to service the handbrake on the farm Manitou, said Mr Roberts. Mr Charles-Jones has embarked on a similar safety programme by replacing a broken reversing mirror. The two farmers are sharing their experience’s on Twitter with the hashtag #LensLeg.