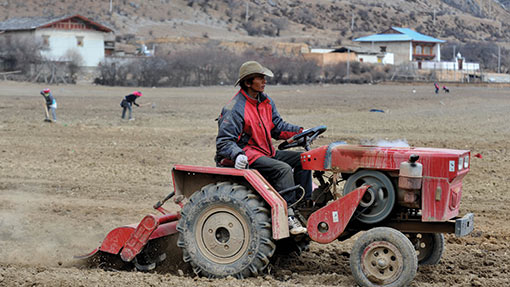 China is one of the world’s great curiosities. In the space of several decades it has morphed from obscure Asian outpost to manufacturing metropolis.

But manufacturing on such a scale demands an enormous workforce and the workforce demands food so agriculture, though a little less fashionable than before, is more important than ever.

Many parts of China have the perfect climate for cereal and vegetable farming and the country is one of the most productive in the world, but the sheer size of it also makes it incredibly geographically diverse.

Deserts spread across the arid north to Kyrgyzstan and wide, dairy-friendly grasslands drift into the Mongolian plains.

Mountain ranges including the Himalayas dominate the southernmost landscape, forming an uncompromising curtain between China and southern Asia. Much of central China is covered by subtropical forests and is dissected by two of the world’s largest rivers, the Yangtze and the Yellow.

Winding down from the Tibetan plateau before emptying into the East China Sea, these act as arteries for transporting goods to less accessible regions.

Despite bordering 14 different countries, the 9,000-mile eastern seaboard forms the heart of China’s trade links. The abundance of work coaxes in migrating workers from rural regions, which has seen city populations boom.

There are now 160 cities with more than one million inhabitants, but that’s expected to rise to well over 200 within 10 years. Shanghai – the most heavily populated city – was semi-rural just 25 years ago and now has 50 million people living within an hour’s drive of its centre.

China’s position as the world’s number one importer/exporter is common knowledge, but the quality of its products has risen significantly.

Car manufacturers put their trust in Chinese manufacturing facilities some time ago, but it has taken agricultural machinery makers a little longer to join the made-in-China party.

For farm machinery builders there’s another big advantage to moving production eastwards – proximity to Australia and New Zealand. These are important markets that would otherwise be a long and expensive boat ride from manufacturing plants in Europe or North America.

New Holland and John Deere were two of the first to make their way into the Chinese and rest-of-Asia markets.

New Holland has established two Chinese subsidiaries, while the green giant now has seven tractor and combine factories, having initially sold its machinery with different colour paintwork as part of a joint venture with an established Chinese manufacturer.

It reverted to its traditional colours last year and its green tinwork is now the most common of all the western brands to be found in the country.

Same Deutz-Fahr also paired up with a Chinese tractor maker – Shandong Changlin – to distribute its range of machines. It hopes to be selling 30,000 tractors by 2015 using Changlin’s 490-strong dealer network.

Claas is another company rooting itself in Chinese soil quicker than a well-watered leylandii. Last year it bought harvesting specialist Jinyee, which it hopes will form a solid base to attack the fastest growing machinery market in the world.

Tractor sales in China have been rising by 15-20% year-on-year, and average horsepowers are rising, too. Domestic brands still dominate the marketplace, often because they cost peanuts to buy and their extensive dealer networks make them easy to find.

But it’s the western brands that are more desirable and, with net farm income the highest it’s been for 40 years, farmers can afford to splash out on more familiar names.

That should be good news for one of the smaller European manufacturers to make the move east. Swedish fore-end loader builder Alo shifted its entire implement manufacturing to China in 2010 in anticipation of an Asian agricultural boom.

The company owns two of the big brand names in the loader world – Trima and Quicke – which it supplies for the likes of Kubota, Zetor, Massey Ferguson and Valtra.

It builds and sells 35,000 loaders each year at its ancestral home in the rural north of Sweden. It also makes hydraulic rams by the lorry-load – 150,000 to be exact – while frames to fit all of the major tractor brands come from its French factory. There’s also a plant in Tennessee to cater for the North American market.

The company shifted its implement manufacturing to Ningbo – 140 miles south of Shanghai – back in 2010, with an eye on lucrative markets in China and India.

For European manufacturers there’s also the appeal of an all-you-can-eat buffet of cheap component parts. Alo chews through almost 8,000t steel each year, but basing itself in China immediately knocks 15% off the bill. Eighty percent of its component parts originate in China, so cost savings are clearly worthwhile.

The factory currently churns out 40,000 implements a year but Alo expects that to rise to 65,000 in just two years. The company is keeping a particularly close eye on the dairying regions in the north-east of China. Farmers in these areas are becoming more mechanised and are switching from small square to big bales that can no longer be shifted by hand.

Making any prediction about the potential of the Asian markets remains difficult, though. Farming in the different regions is still relatively undeveloped, with a large proportion of small family farms.

Rough estimates suggest there are as many as 300 million farmers in China – a colossal figure that is reflected in tractor sales. There’s a market for about 500,000 new 40hp-plus units each year, while in the UK, just 15,000 new tractors are sold annually.

The total horsepower working in China is about 1.4bn – which, coincidentally, is the same as the total population. That population is increasingly shunning the traditional bowl of rice and vegetables in favour of higher value meat and milk products, creating greater challenges for Chinese farmers.

It seems the only way they can meet these demands is by mechanising. Music to the ears of western manufacturers, then.