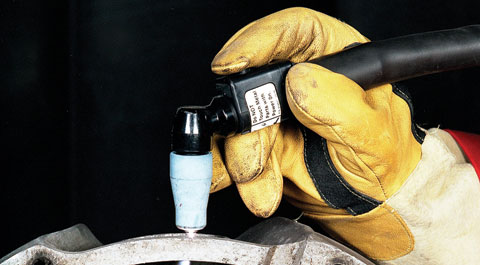 After our introduction to plasma cutting and the way it works, here’s a look at the practicalities.

Set up begins at the torch, which has an on-off trigger and, in some cases, a stepped tip to follow a guide or template – useful in thin material. When working with precision in thicker stuff, rest the outer nozzle rather than the tip on a guide.

Torch components are few and fit together logically.

Switch off mains power before delving into the innards and don’t lose the ceramic swirl baffle. If this is not in the right place or damaged, plasma won’t form property and arcing inside the torch is likely.

The electrode and tip are both consumable. Use an electrode until it’s about 5mm shorter than a new one. Wear beyond this makes it difficult for the pilot arc to jump to the tip, so the torch won’t fire up.

The tip itself both constrains and directs the plasma jet, and cutting performance will suffer as the central hole erodes.

With proper set up and a good tip, the cut line or kerf will be clean, narrow – much narrower than with a gas torch – and square-shouldered. Replace a tip as soon as its outlet elongates or grows, or when the kerf widens and becomes untidy.

The outer ceramic/fibre nozzle will gradually deteriorate but unless whole segments break away, this won’t affect cutting performance.

The workshop compressor must be able to deliver ample air without flagging, or cutting performance will go downhill. About 120 litres/min air (4-5cfm) should serve single-phase sets,while bigger ones need 165 litres/min (5.5-6cfm).

Fit the air supply point with a water trap and turn off or remove any lubricator. Use air hose of at least 8mm bore if a short extension is needed.

A good plasma cutting set has its own inbuilt water trap/regulator. This, and the one on the supply outlet, must be empty and clean. Set air pressure to the maker’s requirement on the set’s own regulator, using an air check facility where provided to mimic cutting conditions. Typical pressure will be 5.5-6bar (80-90psi).

All that’s left to dial in is the amperage required for a clean, full-depth cut in the material you’re working with. Experimenting is the best way forward, at least until you can see what your set will do.

The thermal conductivities of aluminium and stainless steel are different from those of carbon and cast steels, so cutting capacity is lower in these metals. Naturally, thickness has an effect.

Using high current on thin material won’t cause problems as long as you speed up forward travel to suit, while in thick stuff you’ll have to slow down progressively. The set’s upper limit is reached when the kerf won’t clear and slag blows back towards the torch.

A caution or two to start. When slicing with gas, even a tiny air gap stops the cut – but not so with plasma. The good news is that you can stack-cut several sheets at once.

The negative is that when you’re trying to separate one thing from another (say, a damaged bearing from its housing), you can no longer rely on the gap between parts to stop the cut. On top of that, you’ll need to take more care when working over something you might not want damage, such as an anvil.

And watch out where you put the set’s return lead. As with any arc process, if current passes through the small contact points of bearings or bushes on its way back to the set, resistance heating can flat-spot them.

Cuts in thin materials or at low currents are made with the torch tip resting on the work. For higher currents and thicker materials, leave a 2-3mm stand-off gap between tip and work. A specially designed stand-off nozzle can be used where consistent top-quality results matter.

To start a cut, position yourself where you can see the tip all the while. Hold the torch so the tip’s central hole is just in contact with the work. This allows the plasma stream to initiate quickly.

Then squeeze the trigger. After a bust of compressed air, the arc fires up and the cut starts. Move off at a speed that keeps a steady stream of molten slag flowing from below.

Plasma can pierce holes in any conductive material, although maximum depth is limited to about 60% of the set’s cutting thickness capability.

Like when starting to pierce with gas, molten metal will splash up from the surface. If fine metal spray interferes with the magnetic field around the plasma column, the column can sway into the tip and damage it.

Or if molten metal bridges between the tip and plate, high current will flow through this bridge and wreck the tip completely.

Sidestep both problems by starting to pierce with the torch canted over at roughly 45°. Once the initial splash has subsided and a crater opens up, gradually bring the torch upright.

Maintain a stand-off gap of about twice the normal cutting height between tip and plate, or as much as the set will allow. Work round the embryo hole until it is the required size.

Unless you’re blessed with a good eye and a steady hand (or a circle cutting attachment), some shape modification is usually needed. While you can carve slices from the edge of a hole to round it out or increase its diameter, this is not as easy as with gas, because the plasma stream stops immediately when there is no conductive metal below it.

Gouging is a good way to open a preparation U-groove before welding. Plasma is ideal for the job, but you’ll need a three-phase set – single-phase units don’t have the grunt to produce a long plasma column. Which is a pity, because gouging with plasma is faster, more effective and less fume-ridden than with a MMA rod. Use a wide tip, hold the torch at around 40° and blow metal away, repeating if necessary, until the fight profile/depth is reached.

Plasma cutting is an arc process, so cover up exposed areas and use a welding filter specified for arc use. Gas welding goggles will not do. Torch maintenance must never be carried out with the plasma cutter switched on, either.