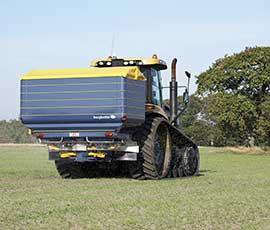 The temptation to expand their products lines has proved too difficult to resist for multi-implement makers such as Amazone and Kuhn, but their biggest rival on the fert spinner market has gone about business a little differently.

France, Germany and the UK make up a meteor-sized chunk of the production volume, but demands in those countries are changing.

Growing acreages and higher horsepower tractors mean farmers are now on the hunt for bigger, wider implements to get the job done more quickly.

That’s the driving force behind the M6W, which is claimed to be the biggest linkage-mounted spreader on the market.

Capacity is up to 5,500 litres and it can fling fertiliser across 42m using Bogballe’s in-centre disc system. The spreader is pto-powered as standard and is designed primarily for tracked tractors, which are best able to cope with huge weight hanging off the rear links.

Although it takes a fair bit of lifting capacity, the Danes argue that it’s a far cheaper alternative to trailed units. It might also offer farmers the chance to get on to crops earlier in the spring when wheeled machines would make a muddy mess of the tramlines.

If you’re filling with bagged fertiliser and not covering enormous acreages then a 4t hopper is probably still adequate for most UK farmers. But if you’re spreading large quantities of urea, or have Russian-sized fields, then the £27,195 list price might be a good investment.

Cutting down on the waste of caviar-priced fertiliser has forced all the mainstream manufacturers to look into ways of improving spreading efficiency.

But while most makers use outward spinning discs that allow them to shut off or limit the throw of each disc separately, the Danes’ new dynamic control system differs.

Both inward-spinning discs of a Bogballe spreader throw fertiliser in a half-moon-shaped 180deg band, so shutting off one side won’t change the spread pattern of the machine.

Instead, the flow of fertiliser to both discs needs to be adjusted if you’re to reduce the throw of material to one side of the machine. The flow is changed by an actuator-controlled shutter and ramp system. This changes the amount of product allowed through the base of the hopper and on to each disc. The ramp varies the position that the fertiliser falls on to the vane – the further along the vane it falls, the shorter the throw distance.

When you come to turn at a headland in a wedge-shaped field the shutter/ramp positions on each disc swap over ready for the next bout. From the cab the operator can either control the eight sections either manually or leave it to GPS.

The dynamic section control system can be specced on all M-line machines and can be retrofitted for about £2,500. However, Bogballe says the standard system, which alters the spread of both discs symmetrically, should be adequately accurate for those spreading across 24m or below.

For headland spreading the Dane’s still use a reverse-drive system. For very short throws where you can’t afford to be chucking fertiliser into the hedgerow the operator must reverse the drive to spin the discs in the opposite direction.

This directs the fertiliser on to a very short vane on the right-hand disc, which immediately limits the throw distance. It’s sensitive to pto speed, too, so if you want to restrict the throw further then reducing pto speed will do that.

Controlling functions, including the section control, will now be possible through a tablet computer. Bogballe has decided to stay independent of brands and, rather than splashing cash on building its own control system, has instead focused its efforts on building a free-to-download app for a tablet.

That way, Bogballe benefits from the graphics and touchscreen that make tablets top sellers, and it also allows the operator to easily send information back to the office.

Going down this route should keep costs down too and, if signal is lost, the spreader can be controlled wirelessly. You’ll still need Bogballe’s Calibrator Zurf box in the cab, though, as well as a GPS antenna because the one in the tablet won’t be good enough, the company says.