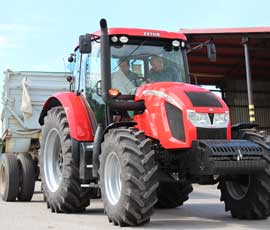 The arrival of a powershuttle makes Zetor’s Forterra HSX its most sophisticated tractor yet. David Cousins took a brief spin in a pre-production model.

So it is with the Forterra HSX. The model was first seen on home turf at the Brno Show in April and this was our first chance to have a brief drive in it. Fieldwork opportunities being thin on the ground in June, we hauled a trailer filled with 16t of sand.

The HSX doesn’t replace the existing Forterra range. Instead, it adds five new models with more power and features alongside the existing ones.

Interestingly, the chassis has been lengthened by 10cm. That’s mainly to accommodate the extra bulk of the emissions-cleaning kit, but it will also help when Zetor starts offering the six-cylinder Maxterra models in 2014.

Out goes the existing lever that worked the standard clutched forward-reverse shuttle. In its place is a wide paddle-like lever which slots into either forward, neutral or reverse.

Zetor says it has put a lot of effort into getting forward-reverse shifts reliably smooth. The system takes into account the input and output shaft speeds, the forward speed of the tractor, the engine rpm and even the transmission oil temperature before telling the proportional valves how much to open or close.

What’s it like in practice? Well, even hauling a heavy trailer up and down slopes, there was virtually no jerkiness, snatching or other unpleasantness when we shuttled backwards and forward.

Of course, it needs a decent workout with a plough or front loader to be able to assess the effectiveness of the shuttle properly, but on the basis of this short test we’re pretty impressed.

Standard Forterras have a 24×18 gearbox, but the HSX models get a 30×30 box. That’s made up of five clutchless gears (you hold a button on the front of the stick) on the main gearstick, plus three powershift steps in each gear and a hi-lo splitter.

There’s also a similar auto-function to the one on the smaller Proxima Power model. This will automatically shift up through the three powershift step as engine revs increase and shift down as revs drop. You can set the upper and lower rev limits at which it changes up or down, and it looks like a pretty simple-to-use system. 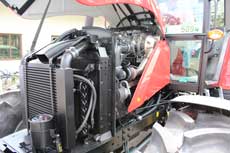 This is the first time Zetor’s 4.16-litre, 16-valve engine has received the Stage 3b/Tier 4i emissions-reducing treatment, so there’s now a diesel particulate filter at the back of the engine compartment. What’s unusual is that it can also be cleaned out manually in addition to using the usual auto burn-off system – useful if you use the tractor for a lot of lighter work.

Is it noisy? First impressions suggest it’s not exactly whisper-quiet, but it’s a perfectly nice sound from the four-cylinder engine.

Next year (2013) the HSX will be the first Zetor to use a centre driveline rather than the traditional offset one, which will sharpen the turning circle. Front brakes are now oil-immersed and self-adjusting. 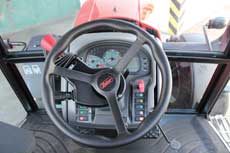 Apart from the dashboard and powershuttle, the cab is much like the standard Forterra. It’s a fairly plain-Jane set-up, but all the key items are in the right place – electronic hitch low down on the right hand side, spool levers nice and high and switches for things like lights and pto clustered about the right hand pillar.

There’s also an interesting Hitchtronic system that automatically selects the right amount of draft and position for jobs like ploughing.

The dashboard is new, too. Engine rpm, fuel, air-pressure and temperature are shown in a neat and colourful way and an lcd screen to the right shows things like the powershift speed you’re in.

Cab quality on this pre-production model looked good – not much different from a NH/MF/Deere product. Lift height is 7t, up from 6t on the non-HSX Forterras.

Prices are not quite confirmed yet, but Zetor UK says the top-of-the-range HSX140 is likely to sell for about £44,000 on farm. Kit levels look good, with standard aircon, passenger seat, adjustable steering wheel, heated mirrors and rear window. Cab suspension will be an option.