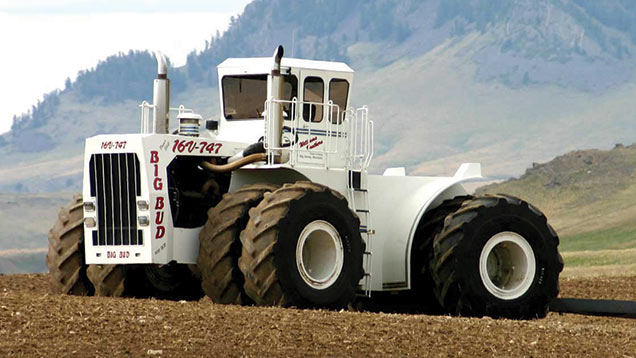 Farmers are among the most innovative workers in the world so it’s no wonder that many incredible records have been set over the years in the challenge to feed a growing global population. We highlight some of the biggest and best farming records.

The world’s largest farm tractor is the Williams Big Bud 747 (right), weighing in at a colossal 100,000lbs.

Built in 1977 in Havre, Montana, USA, Big Bud can pull an 80ft cultivator at speeds of up to 8mph. The tractor is powered by a V-16 two-stroke diesel engine and measures 27ft long, 20ft wide and 14ft tall.

It is currently on display at the Heartland Museum in Clarion, Iowa, USA.

Fastest time to sheer one sheep

He set the record during a sheep-shearing competition at the annual Wellington Show in 2010, when he was the only shearer to record a time below 40sec.

The Broadbalk Experiment at Rothamsted Research in Hertfordshire is the oldest continuous agricultural experiment in the world.

Winter wheat has been sown or harvested on all or part of the field every year since the experiment was set up by Lawes and Gilbert in the autumn of 1843. It measures the effect of fertilisers on wheat yield.

A miniature zebu named Blaze is the world’s smallest cow, standing at just 26in tall.

Blaze was born on 12 September 2005 and is owned by Steven DeMoor and Christian Agnew.

Most milk extracted from a cow in two minutes

He extracted two litres (3.52pt) of milk from a cow while on the set of Die Größten Weltrekorde (Guinness World Records) in Cologne on 20 December 2008.

Most Quadtrac tractors cultivating single field at the same time

The record for the most Quadtrac tractors cultivating the one field at the same time was set in Lincolnshire.

Fifty Case-IH Quadtracs cultivated a field in Hemswell on 28 July 2012, in an operation that involved more than one-third of the UK’s working Quadtracs. Farmers came from as far afield as Aberdeen to take part.

Helen Rainthorpe organised the event to raise money for Cancer Research and in memory of her father, John Rainthorpe, who died of bile duct cancer in 2010.

The world’s most expensive sheep is a Scottish ram, which sold for a staggering £231,000.

The eight-month-old Texel tup, Deveronvale Perfection, was sold in Lanark, Scotland, in August 2009.

Fraserburgh farmer Jimmy Douglas bought the pedigree ram, which was bred by Graham Morrison, of Banff.

Most tractor-mounted hedgetrimmers working at once

The Hedge Cutting Association of Ireland holds the record for the greatest number of tractor-mounted hedgecutters.

One-hundred-and-two hedgecutters were recorded cutting hedges for five minutes to set the record at the second All Ireland Hedge Cutting Championships in at Kilbline, Bennettsbridge, Co Kilkenny, in October 2013.

All proceeds from the day were given to the LauraLyn charity, a hospice for terminally ill children.

Born 17 July 1991 to breeder Judy Caron, Ernestine found a home with Jude and Dan King and their daughters Morgan and Rhiannon in Alberta, Canada.