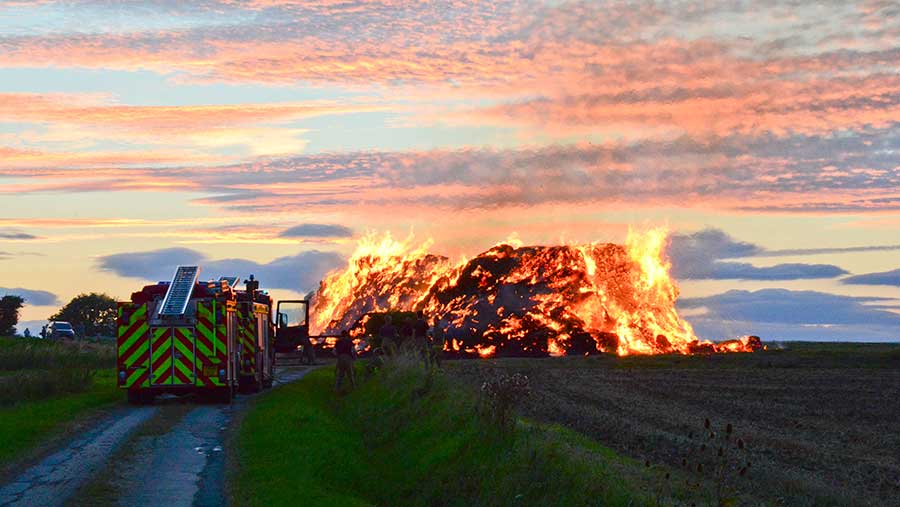 The fire at High Burnham Farm

A stack of around 1,000 wheat and oilseed rape straw bales destined for a nearby power plant has been destroyed in a suspected arson attack in north Lincolnshire.

Farmer Simon Clark, of High Burnham Farm, Owston Ferry, told Farmers Weekly he first noticed the blaze at around 7.30 yesterday evening (28 August) when he spotted flames from his farmhouse window.

Firefighters attended the scene with one hose reel and two beaters, but Mr Clark said there was nothing the emergency services could do.

“It was quite a hot day but the fire hasn’t set fire to the stubble. The fire isn’t going anywhere, it’s still burning now. Hopefully it will burn itself out.

“I got up at 4.20am this morning and looked and there were still firefighters there, they watched it right through the night,” said Mr Clark.

He said the incident was definitely arson, the straw was dry and there was no way it could have self-combusted.

Although this stack and others on the farm destined for a local biomass power station are kept well away from farm buildings, it is not in a very visible location.

“It’s down a farm track, the fire brigade could see it when they were coming over, but then they lost it, so it’s not seen from a lot of places,” Mr Clark said.

It is not the first fire to have occurred on the farm, with two previous blazes, although neither have been in the past five years.

Rev Andrew Lindley, who drove past the blaze and caught it on camera, said his father, a local farmer, estimated the stack to contain around 1,000 bales.

The bales belonged to another farmer who farms on part of Mr Clark’s 238ha site on Burnham Road and would have been moved in the next week.

It is only the second year the power station has been operating, but a considerable tonnage of straw was already being sourced from the local area, said Mr Clark.