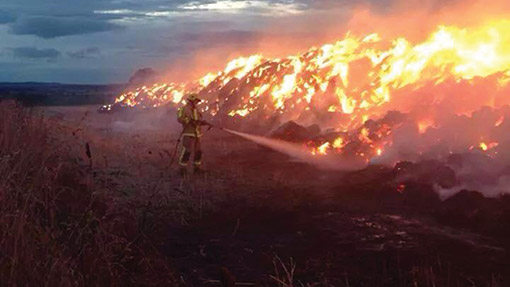 A straw fire from 2013 in Shropshire.

About 1,500 bales of straw have been destroyed in an arson attack in Wootton, Oxfordshire.

Third-generation farmers Andrew and Hannah Goffe were alerted on Saturday 19 August by a neighbour that a fire had been started in their field, one of three sites farmed by the couple.

Mrs Goffe told Farmers Weekly that a member of the public said they had witnessed a group of youths set fire to the bales, “for absolutely no reason, probably just to put it on Snapchat”, she said.

Mr Goffe met the emergency services at the site in his loader and was instrumental in the four-hour battle to extinguish the blaze.

“The firemen had two hoses either side of my husband to allow him to get in there with his loader and spread the bales out.

“It was quicker for us to sort it out as we have the equipment, but it was dangerous for him to go in there.”

The attending emergency crew said it was one of the biggest straw arson attacks they had seen in recent times.

“The village stinks,” Mrs Goffe added. “Luckily it has rained which has helped but the stubble was still smouldering yesterday.”

Mrs Goffe said that although the support from her local community had been strong, she had been shocked by the negative reaction she had received to a Facebook post on the attack.

“There is huge support for British farming, people have respect for what we do, and we are seriously grateful for that.

“But on Facebook some people were saying ‘you have insurance, so what does it matter?’

“We do have insurance, and luckily we still have plenty of barley but people aren’t aware of the consequences.

Although the straw had only been left in the field due to their straw merchant being knocked back by poor weather, they will move bailing to another of their sites in future years, despite the field having perfect transport links.

“The land is going to need extra cultivation and the loader will probably need new tyres,” she added.

The couple haven’t yet heard from police whether any suspects had been questioned about the arson.

“The problem is there is a real sense of entitlement. I’m really gobsmacked that I haven’t had a knock on the front door from their parents.

“It’s sad that in a really rural area there is no knowledge. I’m not as shocked as other people have been, but that’s farming.”

Thames Valley Police are urging anyone with information to call 101 and quote reference 1350 (20/8).