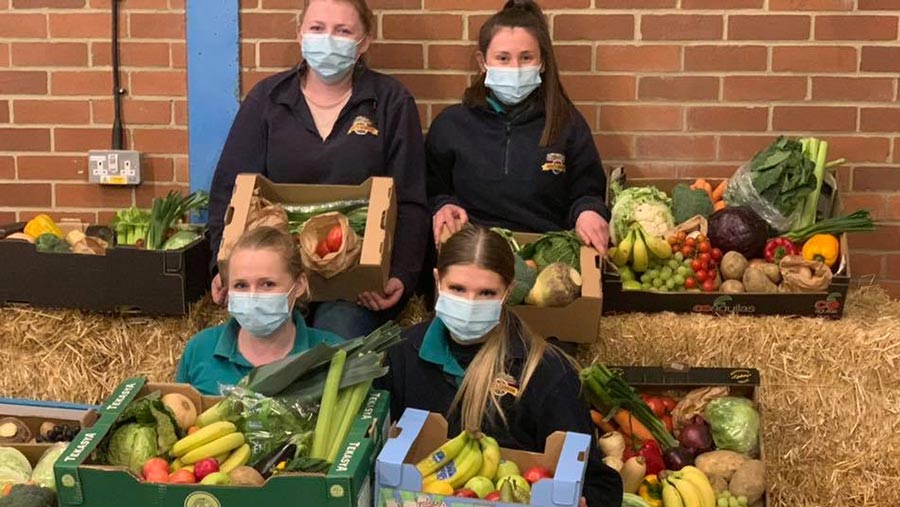 In a year that saw the rise of a global pandemic, there was plenty to despair about.

But many farmers rose to the crisis to get food to the vulnerable and elderly and the public recognised their efforts with renewed support for the sector.

The Farmers Weekly #FeedTheNation initiative shone a light on the tireless work our farmers do to help keep the country fed.

Highlights over the eight months of coverage include the work of Probus Young Farmers’ Club (YFC) in Cornwall, which delivered food and offered support to elderly and vulnerable people self-isolating, and Scotland’s Rural College which donated almost one-and-a-half tonnes of poultrymeat to food banks, school breakfast clubs and homeless shelters in Glasgow and West Scotland.

There was a surge in direct sales of meat, dairy and vegetables via couriers, as well as at the farmgate through vending machines and farm shops, as consumers “bought local”.

And Yorkshire farm shop Bert’s Barrow was transformed into a secure drive-through in order to keep the public safe and continue to support more than 100 local producers.

Devonshire farmer Alec Burrough showed no sign of slowing down on his organic family dairy farm. The 87-year-old, who has been farming full time for the past 72 years, said: “I’m just doing what I’ve always done and making sure people stay fed.”

Public support for farmers on the rise

Public support for British farmers hit new highs as they led the way feeding the nation during the coronavirus pandemic.

Three-quarters (75%) of people voiced a positive view of UK farming – the highest figure since OnePoll started carrying out its annual Farmer Favourability Survey in 2012, marking a 6% point increase in public favourability since June 2019.

The majority of the 2,000 adults surveyed in England and Wales in June cited farmers’ vital role in putting food on the nation’s plates during the first lockdown as the reason for their positive view.

The survey also found that 86% believe British farms should grow as much food as they can to provide national food security, and 89% feel farming is fairly or very important to the UK economy.

More than 1m people also pledged their support for British farming by signing an NFU petition urging the government to ensure that future trade deals do not lead to an increase in cheap food imports that would be illegal to produce here.

NFU president Minette Batters described the volume of support as “overwhelming” and said it showed the public “care deeply about their food, where it comes from and how it is produced”.

In September, dozens of MPs and others posted photos and messages of support for farmers on social media to mark the NFU’s annual Back British Farming Day.

But some MPs who wore a wool and wheatsheaf pin badge as a sign of solidarity for farmers later faced accusations of “Brexit betrayal” by failing to safeguard British food standards in law.

A host of farmers have been recognised for their services to the industry this year, or rewarded for their innovative ideas and work.

Cumbria farmer Lucy Dickinson was crowned Farmers Apprentice 2020. Alongside the coveted title, the 23-year-old won £10,000 to help develop her 150-head sheep enterprise. She plans to take her trailer test and buy a weigh crate, weight system and big turnover crate.

Wilfred Emmanuel-Jones, founder of the Black Farmer meat and dairy products brand, was awarded an MBE for services to British farming.

The Devon farmer also won the prestigious Daily Points of Light award for encouraging retailers to feature images and stories of people of colour.

The images were portrayed on packs of special jerk-flavoured sausages to celebrate Black History Month.

The National Federation of Young Farmers’ Clubs awarded Probus YFC a Community Spirit Award, for its work to support the elderly and vulnerable during lockdown.

And Charlotte and Jason Wells-Thompson saw off competition from more than 200 other businesses to scoop the Deliciously Yorkshire Lockdown Legends Award for Business, voted for by the public.