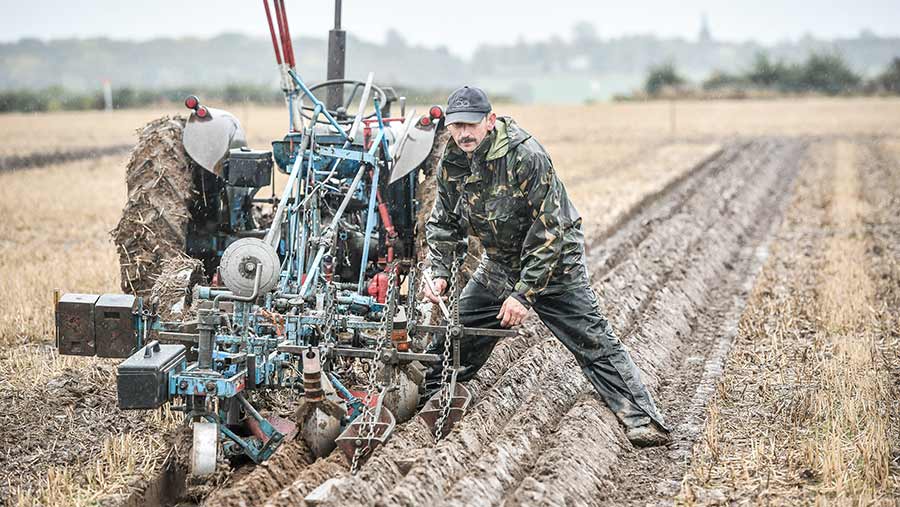 Wet weather failed to dampen the spirits of more than 250 ploughmen and women who competed at Britain’s annual ploughing championships.

As Storm Callum hit the country, high winds on the first day followed by rain on the second day challenged not only the competitors, but also the organisers and visitors.

See also: Read advice on ploughing and cultivation in FW’s Know How centre

The British National Conventional Championship was won by David Chappell from Doncaster, South Yorkshire, taking the title for the fifth time.

Both men will represent England at the 2019 World Ploughing Championships, to be held next August in Minnesota, USA.

The Vintage Trailing Championships was won by Ray Alderson from Darlington, County Durham, who ploughed with an International B275 and Ransome RSLD plough. John Crowder from Torksey, near Lincoln, finished second, and third place went to Trevor Johnstone from Wigton, Cumbria.

The Supreme Championship title was judged independently from the championship winners and was won by David Chappell. It was a family affair as the trophy he won was the Ken Chappell Trophy and his brother Ken presented it to him.

Sue Frith, chief executive of the Society of Ploughmen, organisers of the championships, thanked the hosts, William Corbett Farms and John Upperdine, for the loan of their land.

“Without the help and support of our sponsors and our volunteers who travel from all over the country to be with us, it would be impossible to stage the championships,” she added.

Full results can be found on Society of Plougmen website. The organisers are hoping for better weather at next year’s championships, which will be held at Nocton, Lincoln, on 12 -13 October 2019 by kind permission of Beeswax Dyson Farming.