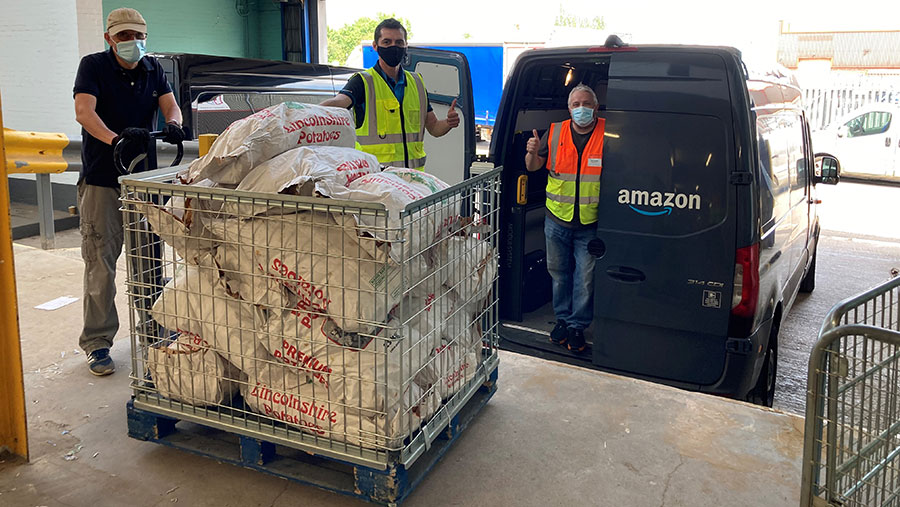 Farmers are being asked to donate surplus fresh produce to charity so it can be used by food banks rather than sent to landfill or ploughed back into fields.

It comes after internet giant Amazon teamed up with the NFU. Farmers in the Midlands can call their NFU regional office to arrange for surplus eggs, fruit and vegetables to be collected by Amazon’s fleet of vans and delivered to food banks in towns and cities.

Oliver Shooter of Lincolnshire growers AE Lenton was the first farmer to use the scheme. Some 500kg of potatoes were transported from the group’s store at Friskney, near Boston, to the Hope Centre food bank project in Northampton.

Mr Shooter said: “The potato market has been quite tough this year, so we had some surplus and we felt it was a good cause. It is a relatively small thing for our business, but it can make a big difference for people who are less fortunate.”

The coronavirus pandemic saw a record 2.5m emergency food parcels given to people in crisis during the year ending 31 March 2021, according to the Trussell Trust. It has urged the government to end the need for food banks once and for all.

NFU Lincolnshire adviser Rhonda Thompson said: “It’s a fantastic initiative. It’s giving farmers a real opportunity to show their appreciation back to the public for their support of British produce by giving something to the community.”

Amazon declined to comment on the initiative, which is in its initial stages and restricted to farms in the East and West Midlands. If the project is successful, however, it could be rolled out more widely.

NFU regional director Rob Newbery said more donations of fresh and edible food were needed from farmers across the Midlands. Donations should be safe and suitable for direct supply to families and in a format suitable for ambient storage and transport.

Farmers who want to donate fresh produce should contact the NFU Midlands office on 01952 400 500.