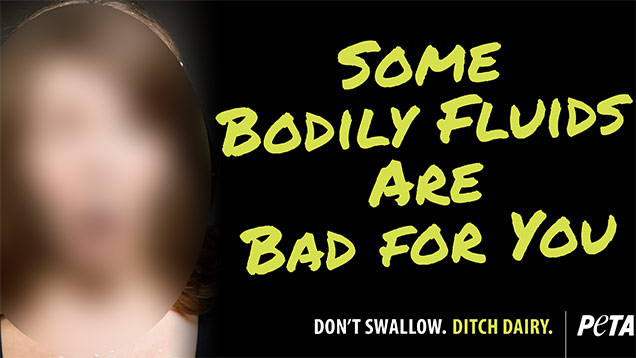 The Peta poster, which Farmers Weekly has blurred. ©Peta

Animal rights group Peta has been ordered to take down a sexually explicit billboard that attacks the dairy industry.

The anti-dairy advert was put up on a billboard at Notts County’s ground in Meadow Lane, Nottingham.

The ad shows a woman’s face soaked in white liquid next to the words: “Some bodily fluids are bad for you. Don’t swallow. Ditch dairy.”

It was taken down after Notts County Football Club lodged complaints about its content.

A spokesman for Notts County FC said: “Once the content of this advert was identified we informed advertising company Space Outdoors who agreed the content was not in keeping with our community and family-focused values.

“The agency committed immediately and proactively to change the advert effective Friday 5 December.”

People for the Ethical Treatment of Animals (Peta), said the ad was prompted by a recent Swedish study which claimed there was an increased risk of sustaining bone fractures and of premature death among people who drink more cows milk.

Mimi Bekhechi said the ad was just a “cheeky way” to alert passers-by to the dangers of drinking cows milk.

Dr Mullen said: “The Dairy Council sees this type of stunt as being offensive, misleading and a gross distortion of the nutritional benefits of dairy.

“We are fully supportive of the decision to remove the billboard.”