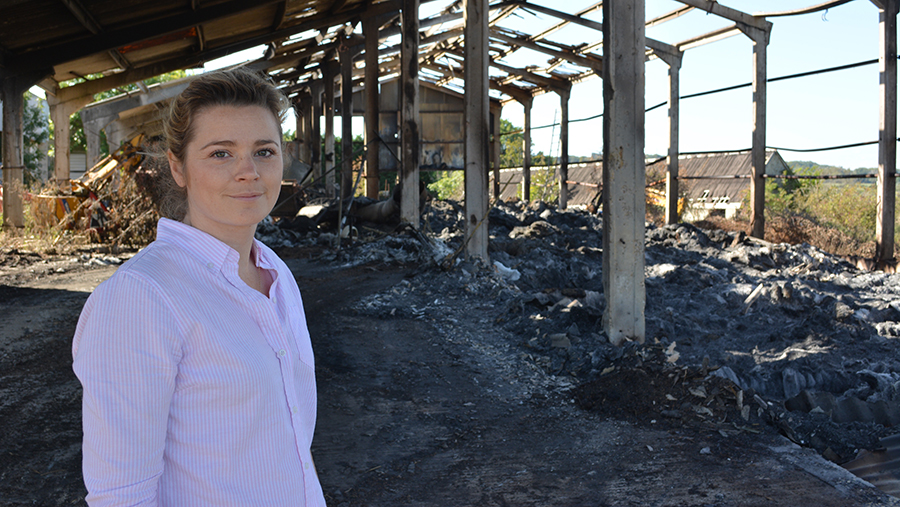 Oxfordshire farmer Imogen Stanley has been the victim of rural crime 48 times over the past year – including an arson attack that this month destroyed two barns.

Crimes include vandalism to irrigation sprinklers costing more than £3,000, the theft of a vehicle worth £8,000, fly-tipping, damage to footpath signs and fencing, and damage to crops from motorbikes, dogs and people.

“At 6pm I had a call saying Manor Farm was on fire,” says Imogen, whose family has been the victim of arson five times over the past 40 years. “Four minutes later when I arrived, two barns were on fire and 400 straw bales were almost ashes.”

In total, more than 15 fire appliances turned up over the next two days to make sure the blaze remained extinguished – dousing a fertiliser tank with water to prevent if from catching fire. “It could have gone up at anytime,” says Imogen.

“As we are tenant farmers we will not see the insurance money for the rebuilding of the barns or even a potential barn, that is dependent on our landlord. Therefore we will need to put up our storage and bear the cost ourselves. We are not the only business that has lost from the fire.”

Thames Valley Police said the fire was believed to be arson. It has appealed for anyone with information on the incident to call 101 quoting reference URN 1022 of 8 September. Alternatively, information can be passed to Crimestoppers on 0800 555111.