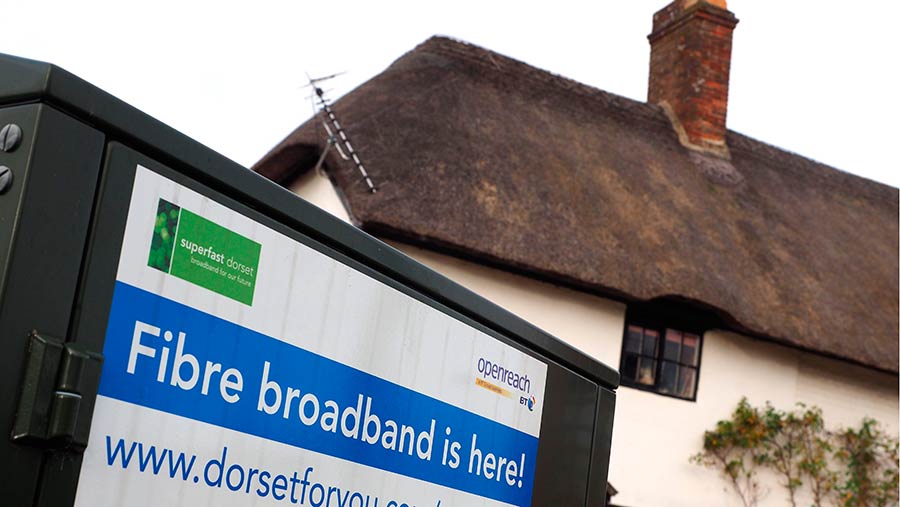 Thousands of farmers in the most isolated rural areas would be left without high-speed broadband in an offer put forward by BT Openreach.

The largest fixed-line broadband infrastructure provider in the UK has offered to voluntarily provide 99% of households in the UK with broadband by 2020 in place of regulation.

However, under the plans an estimated 60,000 remote homes would still not receive that minimum speed of 10Mps as the infrastructure would be too costly.

The Digital Economy Act, introduced this year, included plans to bring in regulation in the form of a Universal Service Obligation (USO) in 2020 to force improvement in the UK’s broadband network.

The USO would give all households or business premises in the UK the right to a broadband connection of a legally set speed, suggested at 10Mps, or the right to request one.

But the government has revealed it is considering abandoning its plans to enforce the USO as BT’s offer would provide quicker speeds to more customers, faster.

‘Back of the queue’

The Country Land and Business Association (CLA) has refused to compromise and said it will “fight any attempt to water down the hard-won legal right to broadband for rural homes and business”.

CLA president Ross Murray said: “For too long, rural areas have been at the back of the queue when it comes to investment in infrastructure and that is why this legal principle is not something to compromise on.

“The USO is necessary because it creates an inalienable right that can be enforced by the premise owner. It cannot be replaced by a cosy deal with just one company allowing it to deliver connection how it sees fit.

“Accountability for delivering the rollout of broadband has been a closed-shop discussion between the industry and the regulator for too long.

“It is this the USO would end, making the consumer the enforcer. It’s no wonder BT Group doesn’t want that.”

Sarah Lee, head of policy at the Countryside Alliance, said the government has had long enough to deliver rural broadband for all.

She added: “There is no promise that BT will be able to meet these targets and that rural broadband will be delivered to the hardest-to-reach parts of the UK.”

The CLA has welcomed £30m of funding to improve rural broadband.

The grant is one of a number of pre-Brexit grant schemes made available through Defra’s Rural Development Programme for England (RDPE), which has focussed on broadband for the first time.

The funding will be awarded to projects that will help provide broadband services at speeds of 30Mbps or faster where it is not available or planned.

CLA senior rural business adviser Charles Trotman welcomed the grants as being the right thing at the right time.

But he also said funding needs to be accompanied by the right support to be fully used.

“A number of well-intentioned grant schemes have not had the desired effect because of weaknesses in how they are promoted and delivered.

“Getting superfast connections to our most remote communities is a vitally important, but expensive and complex task,” Dr Trotman said.

“Targeted support will help with this, but the key is to mobilise communities that could benefit from this to work together to enable the best possible connections.”