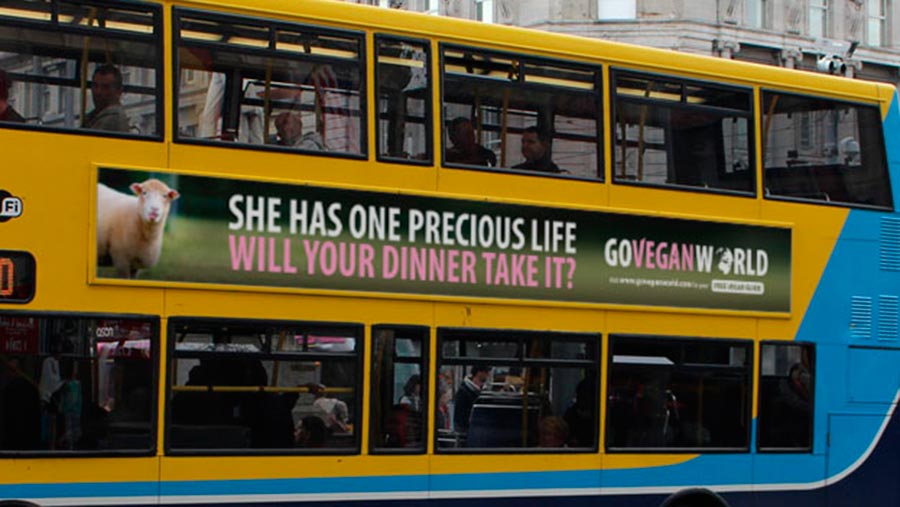 Vegan advertisements are being removed from buses in Northern Ireland following complaints from livestock producers.

An advert funded by the Go Vegan World Group and seen on the Translink Foyle Ulsterbus read: “It’s not a personal choice when someone is killed. Use plants not animals.”

Another advert said: “Dairy takes babies from their mothers.”

UFU president Ivor Ferguson said farmers – including those with children who used the buses to get to school – were outraged by the adverts.

Mr Ferguson said: “A public service should be impartial on all matters but the vegan adverts on the Translink buses use emotive language that singles out our local farmers.”

The adverts had potential to do serious damage to the agricultural industry and the livelihood of farming families, he added.

Northern Ireland farmers met some of the highest environmental and animal welfare standards in the world so consumers could enjoy quality food without worrying, Mr Ferguson pointed out.

He added: “Translink’s adverts dismiss the facts, helping to perpetuate a negative narrative about eating meat and consuming dairy products.”

Mr Ferguson said the UFU respected all personal decisions when it came to diets but to demonise the livestock industry to promote another industry was wrong.

“The language is attempting to influence the general public to isolate the farming community through misinformation.”

After initially saying it could not remove the adverts, Translink said on Saturday (18 January): “These bus-side advertisements are in the process of being removed.”

The Go Vegan World campaign group said it had paid for the campaign to run on Translink buses between 30 December 2019 and 12 January 2020.

“Despite complaints from the Ulster Farmers’ Union demanding that the ads be removed, our campaign ran until the end of our contract,” it said.

The adverts had then continued to be shown free on an “over-show” basis – standard practice when the space had not been booked for the next advertising cycle, it added.