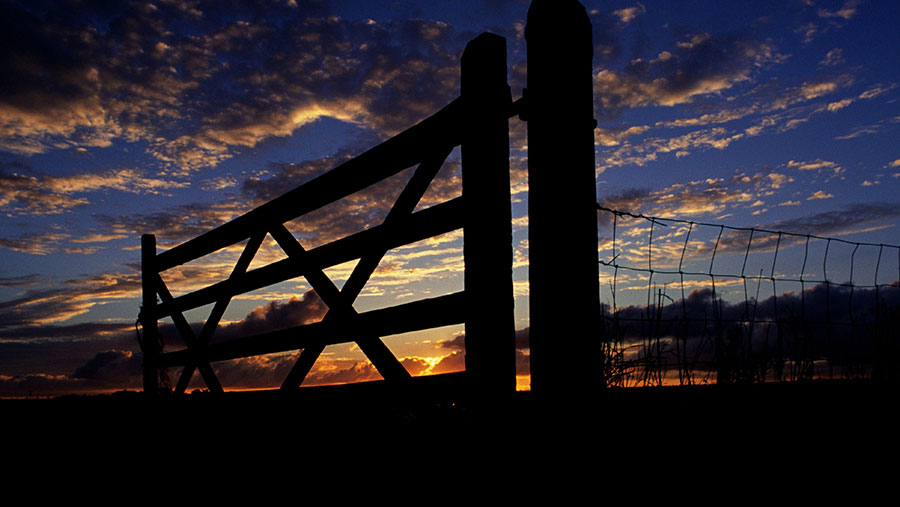 When winter is approaching and clocks go back an hour as British Summer Time officially ends, it is a good time for farmers to review their security.

Farms in the autumn and winter months are dark and secluded places and can prove an inviting target for thieves who will be looking to steal farm vehicles, fuel, tools and equipment.

Statistically, October and November are the two months of the year when police receive more reports of burglary than at any other time.

With their isolated countryside locations, farmhouses, outbuildings, barns, garages and sheds are all prey for would-be rural thieves, who use modern technology including drones, Google Earth and sat navs to pinpoint their entry and escape routes.

But there are a variety of measures you can take to protect your property, land and livestock and discourage potential thieves.

Here are 10 areas to consider to avoid becoming the next victim of rural crime:

Fuel thieves often target farms under the cover of darkness when they are able to drain tanks within minutes if they are not properly protected.

Thieves use anything from basic plastic tubes to pumping apparatus to siphon off hundreds of litres of red diesel from tanks and farm machinery, causing huge financial loss and inconvenience for farmers.

To prevent theft, fit fuel bowsers with wheel clamps or hitch locks. Tanks should be housed in a secure location – within a shed (in line with regulations) or in a compound, such as a locked metal cage.

Store machinery inside sheds using layers of security and ensure tractors are locked up at night. If machines must be kept outside, park with fuel caps against a fence or wall.

Isolated farm buildings down dark lanes are easy for thieves to approach and hide in the darkness. Make sure you light up areas in and around your home and buildings.

Motion-sensor security lighting and CCTV cameras are a good crime prevention and detection tool. Thieves don’t want to be seen.

Install lighting and CCTV in access locations, vulnerable areas and around the perimeter of farm buildings, yards and houses. Consider audible and monitored intruder alarm systems.

With improving technology in this area and a reduction in the cost of CCTV systems, they can be bought for fairly modest sums. Many suppliers offer subscription services with text alert systems linked to mobile phones, tablets or computers, allowing you to monitor the farm 24/7 from anywhere in the world.

Easy access to a property and fast getaway through open or unlocked gates are attractive to thieves.

Restrict access to your yard with locked gates and security barriers such as bollards. If possible, establish a single gated entrance and exit, controlled by a PIN or password.

Field gates should be locked with good quality padlocks, chains and hinges which should be capped or inverted to prevent easy removal. Note that gates crossing a public right of way can’t be locked.

Concrete boulders or tree stumps can be placed in vulnerable entrances as an effective deterrent against fly-tipping, poaching or livestock theft. Undertake regular drive-bys with neighbours to monitor activity.

Recent times have seen a rise in smaller, more portable items of kit being stolen such as tractor GPS systems and power tools.

Record the make and serial number of power tools, by using the first two letters of your farm’s name, or other identifying marks. Alternatively, use forensic property marking systems such as Smart Water or Selecta DNA.

Mark tools, equipment and implements with your post code to deter thieves and aid recovery by police.

Thieves typically target high-value equipment and machinery and often staking out farms by day to return late at night and smash into tractor cabs under the cover of darkness.

Remove keys from tractors and quad bikes when they are not in use and store them in a secure building.

Use trackers, immobilisers and CESAR registration marks on tractors and all-terrain vehicles (ATVs) to deter thieves. Avoid leaving vehicles where they can be easily seen by criminals scouting for theft opportunities.

Consider mechanical devices to anchor down quads, and fit wheel clamps to trailers. Know what you own – record all makes and models and take photographs to help police investigate and aid insurance claims.

Hare coursing sees lurcher-type dogs pitted against each other in pursuit of a hare, with bets often worth thousands of pounds placed on the outcome.

It was made illegal in the 2004 Hunting Act, but still takes place on large bare arable fields after harvest.

Be alert to the signs of coursers; look out for estate cars, four-wheel drives or vans with dogs inside, and groups of people using binoculars to spot hares.

Block gateways and dig ditches around perimeters to make vehicle access to fields as difficult as possible. If you witness hare coursing in progress, don’t approach the offenders. Call police immediately on 999.

Poaching – the hunting, capturing or killing of wild animals such as rabbits and deer – is also illegal under the Hunting Act 2004. Signs of poaching include 4×4 vehicles parked on verges, lines of people walking through fields with dogs, and damage to gates and boundaries around land.

Fly-tipping has seen a huge rise in recent months.

Stopping a determined waste criminal is very difficult, but there are some effective measures to deter fly-tipping on private farmland.

The National Fly-tipping Prevention Group urges farmers to restrict access to land with the installation of gates or barriers, which can be strategically placed earth bunds, tree trunks and boulders.

Ensure gates are closed and, if possible, locked when not in use. Install CCTV or dummy CCTV cameras and consider placing wildlife cameras in hedges in vulnerable areas to snare offenders. Work with neighbours and police to share information on suspicious activity.

Livestock farmers are particularly vulnerable to theft and harm of stock in fields.

The isolated nature of farms make them easy targets for criminals.

Consider joining a Farm Watch scheme to work with other farmers and the police to share intelligence on rural crime in your area.

Post signage on farmland that complies with trespass laws, such as “no trespassing” and “keep out – private property” to notify intruders that they are trespassing.

Set up or join a WhatsApp group with other farmers to exchange information on rural crime, including unusual activity such as sharing number plates of dubious vehicles, hare coursers and details of livestock theft.

Despite good security you may still fall foul of clever criminals, so be prepared for the worst.

It is worthwhile to check that your insurance policy matches your farming needs. Read carefully the small print in your policies. Are you covered for legal expenses if you wish to pursue damages for trespass? Are you covered for malicious damage and vandalism?

Are you underinsured if you need to make claims for items such as tools, diesel, fertiliser, machinery and fires? NFU Mutual and CLA Insurance are among the companies offering bespoke farming insurance.

How to report rural crime

Rural crime has poor rates of reporting due to a perceived lack of action by police and fear of reprisals from criminals. However, farmers should report all crimes on 101 or 999 in an emergency to allow UK police forces to build intelligence. Always get a crime reference number.

Alternatively, call the NFU’s dedicated Rural Crime hotline on 0800 783 0137 to give information 100% anonymously.

* Special thanks to NFU Mutual and the Country Land and Business Association (CLA) for advice.