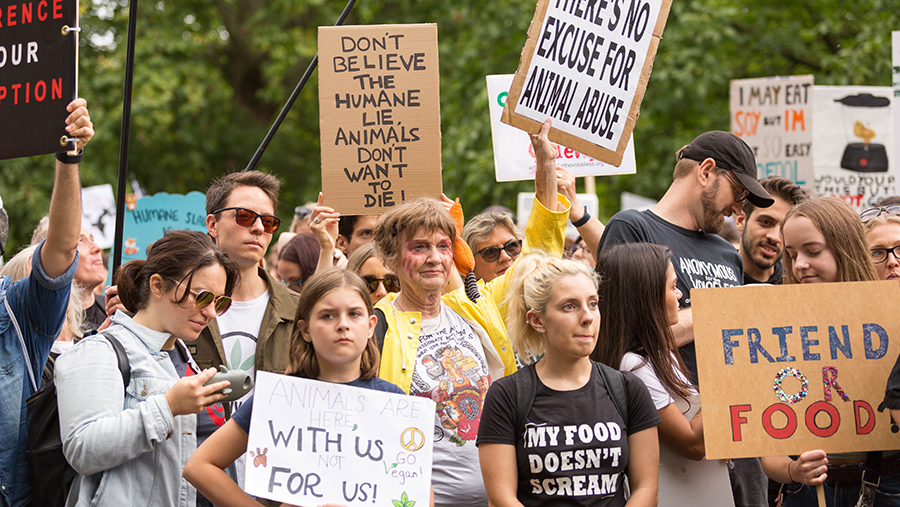 A senior police officer has warned that animal rights activists pose an increasing threat to farmers – and are sharing information about tactics against the livestock sector with other protest groups.

Superintendent Rory Freeman of Thames Valley Police issued the warning during a presentation to farmers attending a rural crime event hosted by the NFU this week at Drayton Park Golf Club, Abingdon, Oxfordshire.

The rural crime event on Monday (16 September) brought police and farmers together to discuss ways of combating rural crime. As well as animal rights activists, it covered a range of issues – from farm theft to fly-tipping, hare coursing and arson.

Mass protest
Superintendent Freeman’s comments come ahead of an autumn of activity expected to include a mass protest against the UK’s biggest wholesale meat market. Thousands of Animal Rebellion activists are expected to descend on Smithfield Market in London next month.

“Some of the animal rights protesters that we have discovered in Oxford have also been in London as part of Extinction Rebellion – or down looking at live exports – but not exclusively,” he said. “What we do know is they talk about different tactics – although they have different causes.”

Activity includes graffiti, criminal damage, confrontation with farmers and landowners being filmed, attempts to get into different sites and property, reconnaissance, and questioning and befriending staff with the aim of getting inside information.

Thames Valley Police is one of England’s largest territorial police forces. Covering the counties of Berkshire, Buckinghamshire and Oxfordshire, it encompasses some 2,200 sq miles and a population of more than 2.1 million.

Superintendent Freeman said farmers were being deliberately provoked and antagonised by protesters. “We are having protests and activity every single week somewhere in Thames Valley – and Oxfordshire has seen a fair amount of attention.”

Obstruction
Protesters were already targeting abattoirs and meat markets, he added. “If you are a farmer taking [livestock] to an abattoir you could get targeted – and several have. They slowly walk in front of vehicles, they slowly obstruct and they will film your reaction.”

Urging farmers not to react, superintendent Freeman said animal activism was “like a religion” to some protesters. “Trying to engage and change their minds is like trying to change somebody’s religion. Often they will go so far as to want to almost die for the cause.”

An estimated 500 animal rights campaigners marched through Oxford earlier this year for the World Day for Animals in Laboratories. Superintendent Freeman said live animal exports were still a contentious issue for protesters and livestock producers could also expect to be targeted.

“There has been a focus on dairy farms as well – and some [farmers] have found their names and addresses on animal rights websites where people are encouraged to take direct action – to walk across farmland and make a stand.”

Veganism had become one of the fastest-growing movements, added superintendent Freeman. “It is was not directly animal-rights related but its growth had created an opportunity for more hardcore animal rights activists to adopt it as their cause too,” he said.

Report all incidents – no matter how trivial, farmers urged

Farmers who find themselves the victim of rural crime should report the incident rather than taking the law into their own hands, say police.

Farmers who are the victim of any unwanted activity – including anonymous phone calls, threatening emails or letters from animal rights protestors – should inform police, said superintendent Rory Freeman.

“Our neighbourhood teams or more specialist officers will talk to you if you are in the least bit concerned, and give you different scales of advice depending on what the threats are,” he said.

All incidents should be reported – no matter how trivial they may seem. Farmers witnessing a crime in progress should call 999. Otherwise they should call 101 or report the incident online, including via the Crimestoppers website.

Superintendent Freeman said while he did not wish to worry farmers, there had been a noticeable increase in animal rights activity, and police were taking it seriously. Officers were gathering intelligence and information about those involved, he added.

“What we have found recently is there is a gap in people reporting things. When it is an offensive email, often people will just delete them. But we need to join the dots and we need them reported to us because it gives us an opportunity to deal with it.”

The cost of rural crime in Oxfordshire increased by almost a third last year – rising by 30.8% to £821,000, according to figures from rural insurer NFU Mutual.

The rise makes the county one of the worst-hit in England for rural crime. Nationally, the cost of rural crime rose by 12.1% to almost £50m – its highest level since 2011. The three counties worst affected were Essex, Kent and Lincolnshire.

NFU group secretary and NFU Mutual agent Hannah Dorling, who is based at Wantage, said: “Agricultural vehicles and machinery thefts account for a large proportion of the rise. We need to paint an accurate picture of rural crime on the ground by reporting incidents.”

Ms Dorling suggested there was less opportunist theft, with an increase in organised crime. Criminals were scouting farms in pursuit of high-value pieces of machinery they could ship out of the country and sell quickly, she added.

“My biggest message to farmers is that we need to work with the police. We need to make sure we are reporting rural crime – even if doing so seems long-winded. It helps to ensure resources are directed where they are needed.”

Rural areas should receive a high standard of policing – and a fair share of resources – without having to make a special case for the countryside, believes Thames Valley deputy police and crime commissioner Matthew Barber.

But it was important to remember the countryside faces different challenges, he said. “There are far fewer tractor thefts in Reading and nowhere as much hare-coursing in Oxford as there is in rural areas. We need to understand that.”

Mr Barber said he hoped the Thames Valley area would get at least 600 more police following the government’s pledge to introduce 20,000 additional officers nationally – and there was an argument it should be nearer 700.

“This is deadly serious and we are expecting to get the first tranche of officers by March next year. The force has already launched a new careers website and that is aligned with a national campaign by the Home Office to promote police officer recruitment,” he said.

The big challenge was to maintain the capacity for recruiting and the quality of training as police numbers were increased, said Mr Barber. This included plans for additional classrooms and trainers to ensure there were no obstacles to recruiting additional officers.