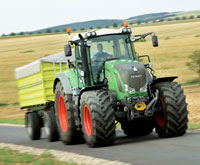 Police have arrested two men after a spate of tractor thefts in East Anglia.

A 38-year-old man was detained at an Essex truck stop where police seized a lorry bound for the Continent. The articulated lorry contained two stolen tractors, one of which had been taken just hours earlier.

The second man was arrested at a farm near King’s Lynn in Norfolk.

The men have been questioned separately by Norfolk and Lincolnshire constabularies.

The recovered tractors are thought to form part of a £250,000-haul stolen by thieves in the region since January.

A spokesman for Lincolnshire Police said that the arrests were made after a plea to rural road users to monitor and report tractor movements across the region.

There has been a fantastic public response with calls made every day to the police reporting the registration numbers of tractors on the roads, the spokesman said.

“We are stopping and checking every tractor we see on the roads.

“Even though we know some farmers have been stopped more than once in a day, they still seem to be supporting our action. We’d like to thank them for their patience and support.”

NFU Mutual spokeswoman Nicki Whittaker called for farmers to continue to be watchful.

“We would urge farmers not to be complacent and to take advantage of the security measures that are available to protect their machinery and equipment.

She also gave details of the tractors which had been taken.

“Recent months have also seen a pair of £150,000 tractors stolen from a shed at Stow Bardolph, near Downham Market, and a tractor and trailer driven off from an orchard at Marshland St James,” she said.

“The possibility of further thefts has not disappeared, despite recent developments, and we are still asking farmers to consider their security and to think about investing in this area. It is clear that if we all work together we can tackle this issue.”