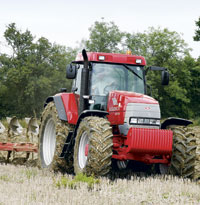 The cost of farm machinery thefts has risen by more than a third over the past year as rural crime continues to increase, a leading rural insurer has claimed.

According to latest figures from NFU Mutual, the agricultural industry’s bill for stolen machinery rocketed to £42.2m in 2009, up from £30.3m the previous year.

The number of farm machinery thefts rose by 5.5% during the same period as the trend for stealing tractors to order increased.

Many of the tractors are immediately exported to Africa, Eastern Europe and the Middle East increased, NFU Mutual said.

A survey carried out by the insurer also found that 70% of its 300 branches around the country had seen an increase in rural crime over the past year.

More than 70% of those questioned said they believed those crimes were planned while two-thirds of the branches said the thefts were carried out by people from outside of the area.

Based on their knowledge of the areas they work in, 64% of the branches said better security measures would help reduce rural crime, while 18% said greater police presence would help cut crime rates.

Only 9% believed membership of Farmwatch or a similar scheme would reduce rural crime.

“The loss of personal possessions or having to make do without vital machinery is a big headache for our customers,” he said.

“This year’s survey highlights the importance of good security measures and vigilance in the battle against rural crime.”