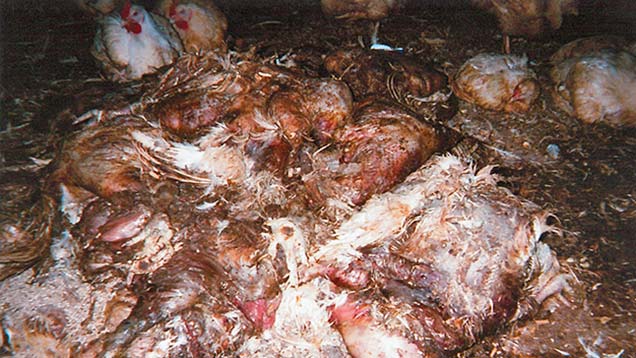 A farmer has been banned from involvement in poultry businesses for five years following the death of more than 6,000 birds at one of his broiler farms.

An earlier hearing was told that she arrived to find a digger moving dead birds and described a horrendous smell.

She estimated about 6,600 birds had perished, but determining an exact number was difficult because of the “scale of putrefaction”.

Dead birds were piled up at the farm, with surviving animals suffering from exhaustion.

The vet also said broilers had been allowed to grow too heavy, were too densely stocked and ventilation was inadequate. Poor-quality litter compounded the problems.

Trading Standards said advice offered following the death of 18,000 birds in 2011, also from heatstroke, had not been heeded.

Deborah Alexander, the investigating veterinary officer from the Animal and Plant Health Agency (APHA), said: “This tragic event resulted in many thousands of birds dying due to heat stress and could have been avoided.”

Cllr Roger Walters, Essex County Council lead member for Trading Standards, added: “This case shows that we will not tolerate livestock being kept in these kinds of conditions.”

Mr Flatman’s ban, under section 34 of the Animal Welfare Act, prevents him from being involved in the poultry trade for five years.